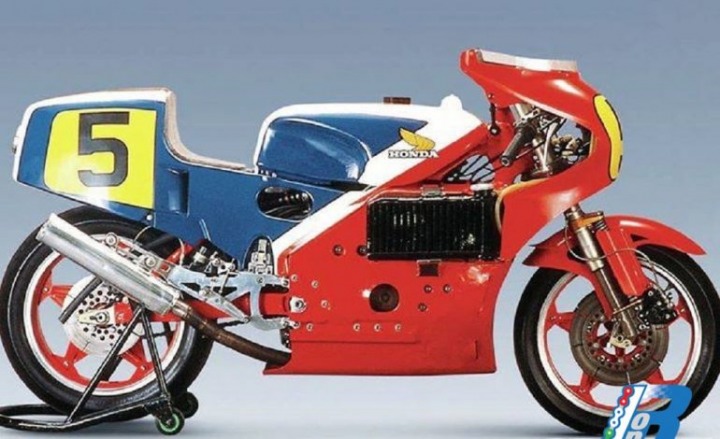 At the end of 1967, the FIM announced that it was putting a stop to all of this multi-cylinder nonsense and that road racing bikes would be restricted to “just” 4 cylinders. The era before had seen all the manufacturers going completely crazy with bikes of all capacities with engines with ridiculous amounts of cylinders. No manufacturer was more committed to this philosophy than Honda whose ethos of only racing 4 stroke bikes had led to it trying to stem the two stroke tide by simply adding more cylinders. In the years before the multi ban, Honda had campaigned a 2 cylinder 50cc bike, a 4, then a 5 cylinder 125cc bike, a 4 then a 6 cylinder 250 and was planning, it is said, when the hammer finally fell, an EIGHT cylinder bike.

These engines revved to astronomical heights, featured huge numbers of gear clusters in the box and were insanely difficult to ride. The 50cc twin revved to 23000 RPM and stalled if you let the revs drop below 17000 RPM for example. Hailwood was interviewed after riding the 5 cylinder 125 for the first time and was asked how many gears it had, “I’ve found 7 so far,” was his Goon Show-like reply.

But when the FIM dropped the hammer, Honda realised that it could not beat the screaming two strokes with “just” a 4 so they took their corporate bat and ball and went home. For the next decade they concentrated on their road bikes and using what they had learned in racing to build a dominance in the market that has lasted to this day. It’s not a co-incidence that the 750-4 came out in 1969. Honda also used the time to develop their automotive division, witness the tiny Honda S600 sports car with a 4 cylinder DOHC engine, individual carburettors and a sophisticated chain drive system. 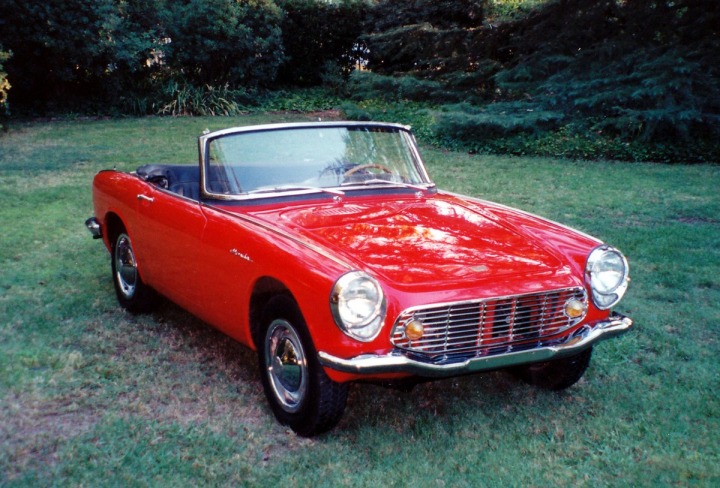 But being effectively banned from competing in road racing still rankled with old man Honda so he gave his engineers the challenge to produce a 500cc grand prix racing bike with a 4 stroke engine that could challenge the now completely dominant two strokes. It was always going to be difficult, probably impossible, actually. By now (1977) the 500cc grids were filled with very light, VERY powerful and very numerous two stroke GP bikes, most specifically, Yamaha’s YZR500 and Suzuki’s RG500. 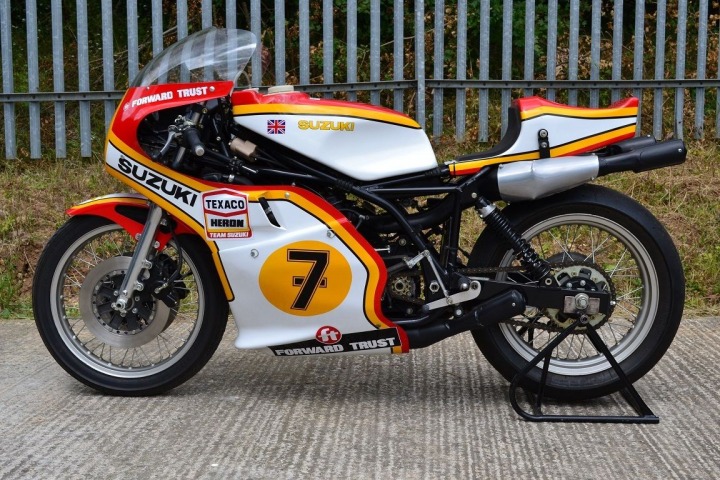 Nevertheless, Honda had built his empire on doing things that people said he couldn’t do. Why couldn’t he do what they said couldn’t be done and build a competitive 4 cylinder 4 stroke grand prix bike? The problem required an innovative solution and Honda set his engineers the task of finding one, and find one they did.

The regulations stated clearly that 4 cylinders was the maximum. But the key to horsepower is volumetric efficiency and the best volumetric efficiency requires large amounts of combustion chamber capacity; flowing more gases more quickly. A “little” 4 cylinder engine just couldn’t do that, especially when the “smokers” didn’t have to worry about valves, cams, camshaft drives and all the other 4 stroke “gubbins” having to be fitted in and sapping power in the process. So Honda’s solution was to build a super 4. Yep, even though the regulations said a 4 was all you could have, Honda figured out a clever “wheeze” that meant their new challenger would satisfy the regulations while giving them the gas flow and the RPM necessary to produce large amounts of horsepower.  The picture of the engine in exploded form shows best how Honda achieved this. Just before that, however, here’s what the engine looked like from the outside. 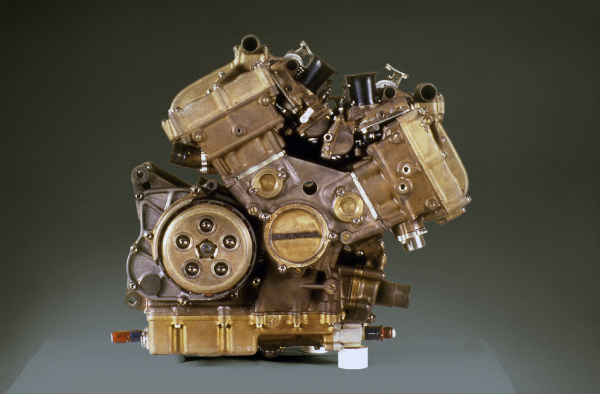 I find it amazing that that photo could have been taken last week in a MotoGp pit garage and it wouldn’t seem out of place. However, let’s move on. Here is the innards of the NR500.

Here is the engine apart. 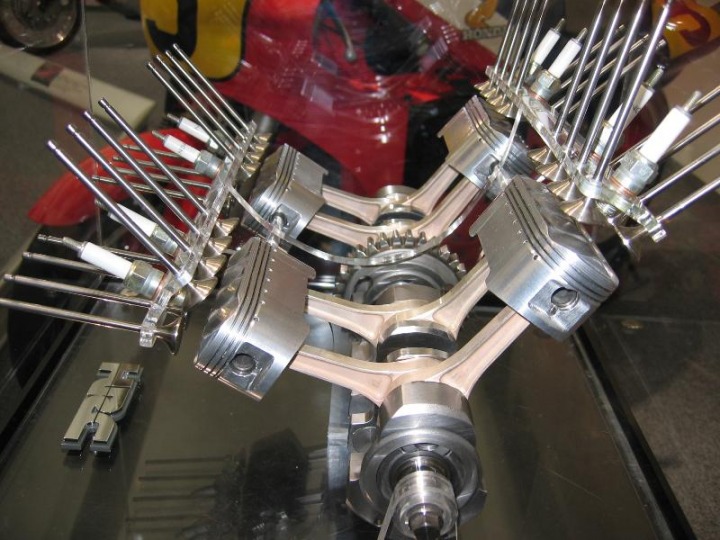 As you can see, Honda very cleverly circumvented the 4 cylinder maximum regulation by designing oval pistons (actually rectangular with rounded corners is more correct) Each piston had TWO connecting rods and each cylinder head had EIGHT valves per cylinder, 4 inlet and 4 exhaust. The oval combustion chambers also allowed for 8 spark plugs per cylinder as well. So, while the engine was technically a V4 it was, in fact, a V8. BOOM, Honda had cracked the puzzle. 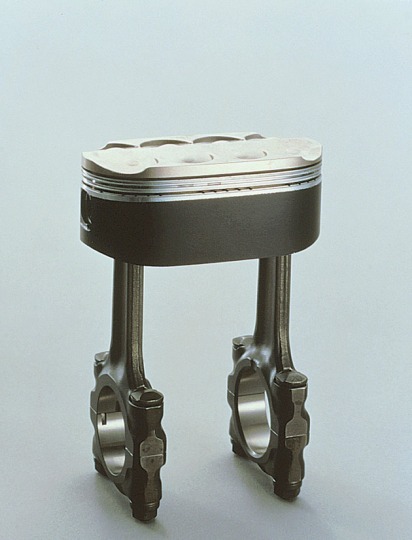 The bike debuted at the British Grand Prix at Silverstone in 1979, 40 years ago this last weekend. It was a less than auspicious occasion. Both bikes, of British rider, Mick Grant and Japanese star Takazumi Katayama, failed to finish. Grant crashed almost as soon as the race started and the bike caught fire and Kat’s bike survived till the 7th lap before it retired with “electrical problems” It was clear that Honda had probably bitten off more than it could chew. The engine produced lots of horsepower and, by all reports, sounded awesome but the oval pistons were its Achilles Heel. Trying to get the piston rings to seal around the corner, as it were, became a nightmare and Honda never really did solve that issue in the grand prix bike. There was talk of ceramic coating on the pistons and the bores to reduce the ferocious amount of heat that the engine produced but nothing that Honda tried really worked. 4 stroke engines, especially of this complexity, require an extraordinary lubrication system and keeping the oil INSIDE the engine was the dilemma that Honda never solved. 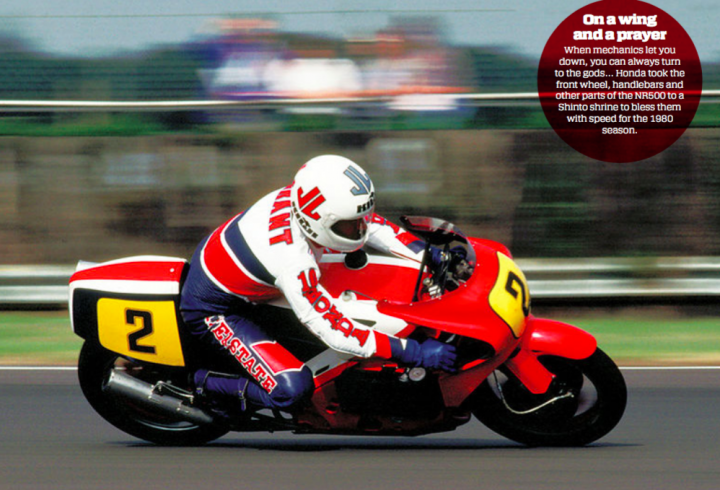 Honda persevered with the NR (for “New Racing” – that was quickly changed to “Never Ready” by the experts) for 2 seasons. It never won a grand prix and only ever won two races, a heat race at Laguna Seca in the hands of Freddie Spencer and a  200 kilometer race in Japan in the hands of Japanese rider, Kyama.

In 1982 Honda admitted defeat and developed a two stroke Grand Prix bike, the NS500 triple and they won the 500cc world title with it with Freddie Spencer in the saddle in 1983. From that beginning, Honda moved on to become the premier manufacturer in the premier class, running two strokes until the “modern” 4 stroke era arrived.

It’s tempting to think that the whole thing was just a total waste of time and money but it wasn’t. The technology developed in the NR later went into the NR750 road bike and also into Honda’s very successful VFR race bike that was used to great effect by, amongst others, Australia’s Malcolm Campbell here at home. While nobody has ever admitted it, there are those who say that Honda used the technology and perhaps even the oval pistons in its Formula One engines until the FIA put a clause in the regulations that specifically banned oval pistons. Why would they do that unless there was a need to do so?

Anyway, on the anniversary of the NR’s debut, a little potted history of one of Honda’s most gallant failures.