You are here: Home / Feats of endurance

The 76th running of the prestigious Bol d ‘Or 24 hour race was completed during the night last night and it was a mixed bag for the Cudlin boys. Damian had a huge crash on the BMW and knocked himself out but regained consciousness and pushed the stricken bike back to the pits single-handedly. Unfortunately the bike was too badly damaged to be repaired and the team was out of the event. Damian’s younger brother, Alex, was competing in the Supersport category and, despite being in massive pain from his dislocated elbow, he helped the team to an eventual 10th overall and 4th in class, an excellent effort. Oh, and a definite indication of how real WEC is compared to the sameness of MotoGp and other championships, the race was won by a Kawasaki, a Suzuki finished 2nd and a Yamaha finished 3rd.

In BSB at Thruxton overnight, Josh Brookes won the round with a 3rd in the first race and a win in the 2nd. This puts him only two points behind the leader of the championship with plenty of rounds to go. Lots of Aussies competing at the BSB so follow the link below and look for the names. Oh, Billy McConnell, who won the supersport race on a Triumph, is also an Aussie.

Complete BSB results from Thruxton Thanks to Bikesportnews for the results table.

In WSBK, it looks like Lukas Pesek’s time is up with the ProRace Honda team. He has been replaced with Lorenzo Lanzi from the Assen round onwards. I think this is pretty harsh (though there is probably money involved). Pesek is a known winner, albeit in GP racing and should have been given more time to adapt before any consideration was given to replacing him. Lanzi, on the other hand, is a nothing rider who only has a few WSBK wins to his name because he happened to be lucky enough to be riding for the “works” Ducati team for one season. He got the bullet at the end of the season and has done nothing since. Oh, well, such is office politics, WSBK-style.

Clean-out of the back shed is complete with a mountain of rubbish due to go out onto the footpath on Thursday for the council clean-up (we get two free pick-ups of non-household rubbish per year in Wollongong. Very handy.) I have measured the size of the shed (now that I can get in there) and the Shadowfax will fit sideways immediately inside the door with about 20cm to spare. Just right.

I want to take this opportunity to wish Dave Quinn, the guy who was primarily responsible for the rebuild of the Shadowfax Kawasaki a happy 50th birthday for yesterday. Couldn’t have done it without him and he deserves to celebrate this big milestone in style (as I am sure that he will – Pot Belly on Saturday night, – be there) 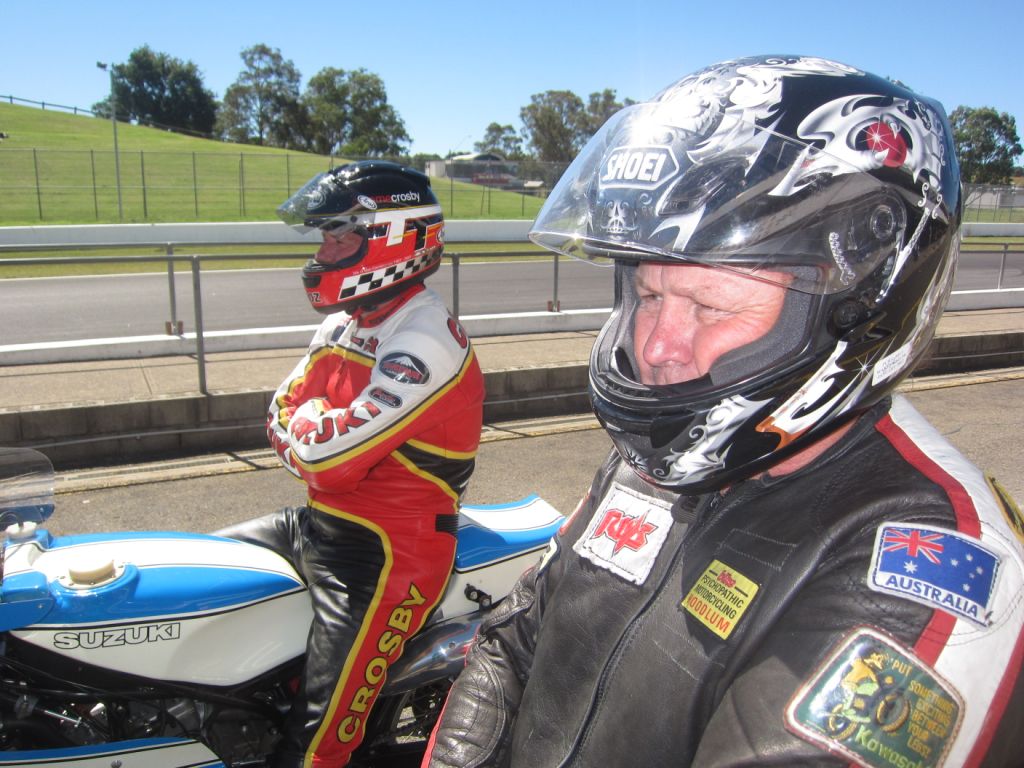 Here’s Dave in the dummy grid at the Sheene, next to Kiwi legend, Graeme Crosby (after whom my wife and I named our son, incidentally) Happy birthday, mate.

Next weekend is the Australian Historic championships at Broadford in Victoria. 181 bike entered. If they put them all on the track end-to-end, they’d go all the way around the track and back to where they started from!