You are here: Home / A brilliant solution to music on the move.

For years now I have worn foam ear plugs when riding, even on the shortest of journeys. This is because many years of riding without hearing protection have left me with partial hearing loss…eh, what was that you said??? (Seriously, if you don’t ride with hearing protection when you ride, you are condemning yourself to it in later life as well.)

However, while riding distances I also like to listen to music and the dilemma has always been that earbud earphones like I use (the bigger ones keep falling out) do provide the music, but they also don’t seal out the wind noise well, meaning that the problem of noise still exists. Added to this it also means that, to actually hear the music at over 100km/h is almost impossible as the wind noise drowns it out.

Now I’m not entering into an argument here about the relative merits of listening to music while you are riding. There are some believe that it actually relaxes them and soothes the tension of riding long distances. Others believe that, by blocking out the extraneous noises, they can focus better on the task in hand while still others believe that this practice is dangerous as it insulates the rider from hearing things that are happening around them (ambulance sirens, for example) and exposes the rider to unnecessary risk. Others say that the rider can become hypnotised, for want of a better word, and that the music itself can start to affect the way the rider rides. I have had riders tell me that, when they want to really “attack” some corners, they select some heavy metal tracks on their .mp3 player. Others agree that the type of music being played does affect their riding mood and that, when intense concentration is required, they turn the music off so that they are not distracted.

Some would argue that, if you have to do that whilst riding in a “spirited” fashion, should not the same apply when riding in any sort of situation?

The argument rages on but I fall into the last category of riders when it comes to music while I am riding. I usually only listen to music on the “transport” stages, to use a rallying term.

Then there is the “grey area” of whether it is, in fact, legal to listen to music when you are riding at all but I am not going there in this article. Fact is that many motorcyclists do, legal or not, so let’s acknowledge that and move on.

But the problem has always been that, regardless of when and where I chose to listen to music, being actually able to HEAR it at highway speeds bedevilled my attempts at combining my riding with my enjoyment of music. Regardless of the advances in reducing wind noise that helmet manufacturers have made in recent years, there still seemed to be enough wind noise to drown out the music once highway touring speed was reached.

My search for a solution took a long time, and, lacking the budget to buy in-ear speakers that cost hundreds of dollars, I was forced to be a little innovative. My first line of enquiry centred on improving the volume output of the .mp3 player itself.

Research led me to a little inline amplifier that went part of the way towards solving the volume problem. Plugging the output cable from the .mp3 player into the input socket then the cable to the earphones into the output socket certainly looked promising; there was volume to burn. Pre-select the volume before you set off and, bingo, audible music at 100km/h. As with every “suck it and see” experiment, however, other issues raised their heads.

Firstly, the type of music to which I listen. I’m not a rocker, my tastes lean towards folk, country and classical. And it was the wide dynamic range of these types of music that created a difficulty. Set the volume so that I could hear the quieter passages and my ears were being blasted when the music got loud. Striking the balance between loud and soft inevitably meant that either the “top” or the “bottom” went missing once my gloves were on, I started riding and I could no longer fiddle with the volume control. I can hear somebody in the background saying, “But we have handlebar controls for that these days.” Yes, that is true, but I am recounting my experiences from before these were available and how I tried to solve the difficulty without such modern (and expensive) solutions.

As well as this, after a few attempts, it seemed to me that I was maybe solving one problem and creating another. Yes, my amplifier was making the music loud enough so that I could hear the music at highway speed, but was I potentially damaging my hearing by having it playing so loud anyway? Could my attempts at having music on the move be adding to the problem rather than alleviating it?

So the amplifier was put away (thankfully it only cost $30 on e-bay) and the search began anew.

The problem still seemed to be centred on the earpiece itself. I soon realised that the problem wasn’t volume; the problem was the bud earphones’ inability to seal off the ear canal sufficiently. Making it louder wasn’t the answer. But, if one could seal around the earpiece, then shouldn’t the volume from the .mp3 player be enough?

Well, while trolling through one of the forums I inhabit, I found a simple, elegant and cost-effective solution. I make no claims to originality here; this IS someone else’s idea. And, as is mostly the case, the best solutions are the simple ones. I trundled straight out to the workshop, performed the same bit of surgery on a set of foam earplugs that I had and, what do you know? It worked, and not just adequately, it worked BRILLIANTLY. The wind noise was almost completely extinguished and I could listen to my favourite music in peace and quiet. So effective was the solution that I didn’t even miss the inline amplifier, the .mp3 player had enough volume as standard.

The picture attached to this article should be enough to show you what to do. In case it isn’t, here’s the go. Take a normal set of earbud-type headphones. Remove the rubber flexible collar that goes on the end and discard it. Take a normal foam earplug and, using a sharp knife, hollow out a little cavity in the thick end of the plug, not too big, as you want the plastic end of the earbud to fit snugly into it Once you have done so, you have finished the job.

Some people who have tried this solution have found that, because their helmet is very snug, the earphones stick out a little too far and can be bumped out of position while putting on the helmet. If this is the case with you, trim off some of the length of the foam earplug with some sharp scissors and repeat the process till it fits snugly in the ear canal but doesn’t protrude too far.

If you’re looking for a cost-effective solution to music while riding, here it is. The foam earplug seals the ear canal and prevents the wind noise, just as it would do if you were using it just by itself. But, at the same time, it allows the music to be heard at an acceptable volume. AND it doesn’t intrude on your ability to hear what is happening around you, emergency service sires, car horns etc, at the same time.

How do I know this? Because I have been using this little wheeze for quite a few years now and I have not found any drawbacks to it at all. It meets and exceeds all my expectations. All for the cost of a set of earbud headphones ($9.95) and a pair of foam earplugs ($0.50)

Oh, and don’t tell me that this or that set of earphones at $160 or $200 will do a better job; I’ve already been TOLD that (though I find it hard to believe). I’m sure any problem can be solved if enough money is thrown at it. Fact is that, for the times that you want to ride and groove at the same time, my adopted $10.00 solution takes some beating.

And of course, once the earplugs get a bit “manky” you can just throw them away and set up a new pair at the exorbitant price of another $0.50!

As a simple, elegant and cost-effective solution to music on the move, it takes some beating. 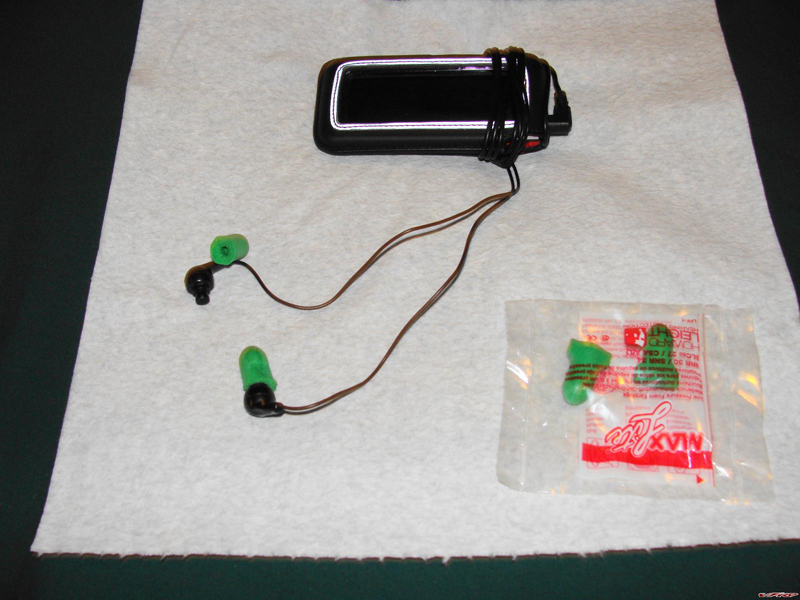