It was supposed to be a 3 day tour of the Victorian Alps. Accommodation was booked and the participants primed and ready to go.

On Wednesday last there was a freak cold snap that hit southern NSW/northern Victoria and dumped over 30cms of snow on the alpine regions. Charlotte’s Pass shivered through its coldest April night on record at -13 degrees and suddenly the wisdom of the tour began to be called into question. A phone conference reached the consensus very quickly that shivering our butts off while keeping an eye out for black ice on the road seemed neither appealing, safe or fun.

So, shift to Plan B. Unfortunately, there was no Plan B so it was time to concoct one. It was agreed that a northerly run could result in better weather conditions and so it quickly became an Oxley run. Having done one in January, I was more than pleased to be able to re-acquaint myself with the wonderful roads of the northern tablelands. Meeting at Chris’s (that’s Chris#2) place on Friday night, Chris (#1) and Dale rode up from Canberra and I rode up from Wollongong. Andrew fronted on Friday morning and we were ready to head off. Chris #1 was on his immaculate ST1100 Honda. Chris is 6’7″ tall so it looks quite small under him. I was on BBII, Dale was riding his almost-new Triumph Thunderbird and Chris#2 and Andrew were on their Gixxer 1000’s (K2 and K4 respectively)

Across the Galston Gorge, along the Old Road and then Central Mangrove and breakfast at Kulnura. Some Ulysses members were there on some lovely old bikes, the most enjoyable (for me) was this immaculately restored Honda 750F2. 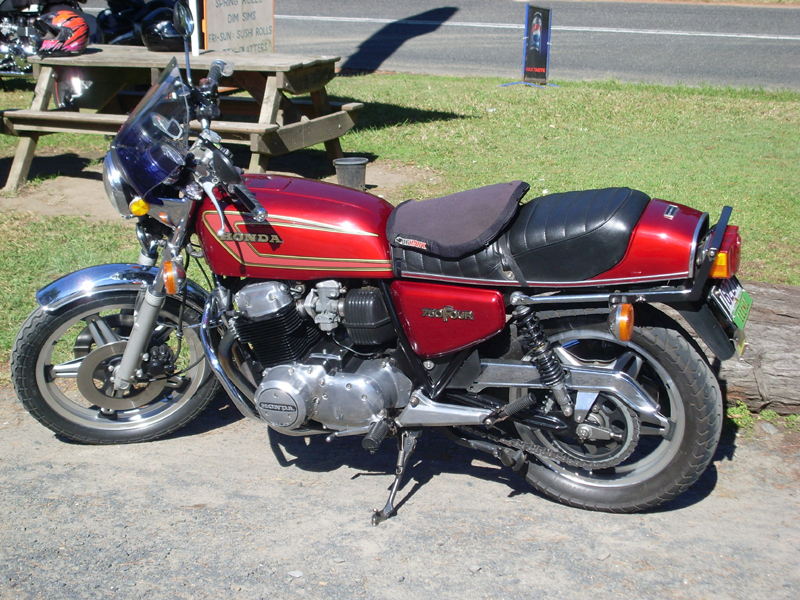 One of the delights of Autumn touring (apart from the weather being at its very best) is the glorious scenery. Living in Wollongong, as I do, I really miss the autumn tones that I used to enjoy as a matter of course in Canberra. At Kulnura I found these gorgeous liquid ambers. 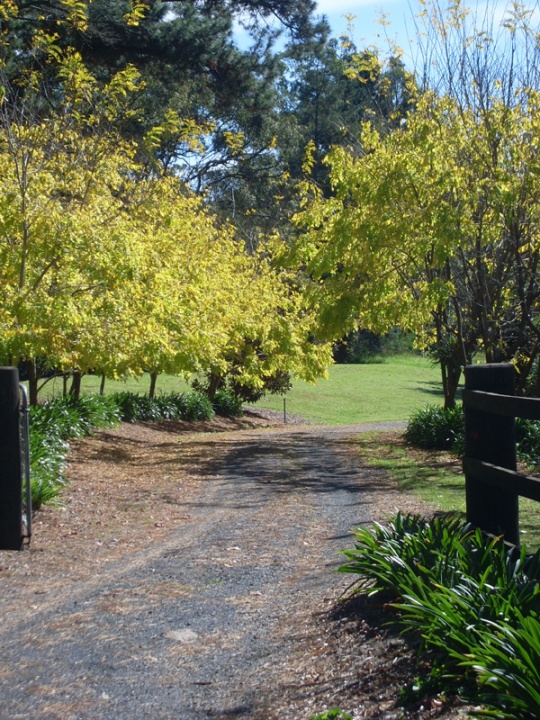 Then it was across the Wollombi Road, which, while entertaining in layout, is rough and pot-holed these days and broken up by a ridiculous amount of road work and a 600m section of some of the roughest gravel I’ve ridden in a long while. Broke, Milbrodale (and, sadly, not a southern diversion to do the Ten Mile) and then Singleton and Gresford for lunch at the delightful Crossroads Cafe. 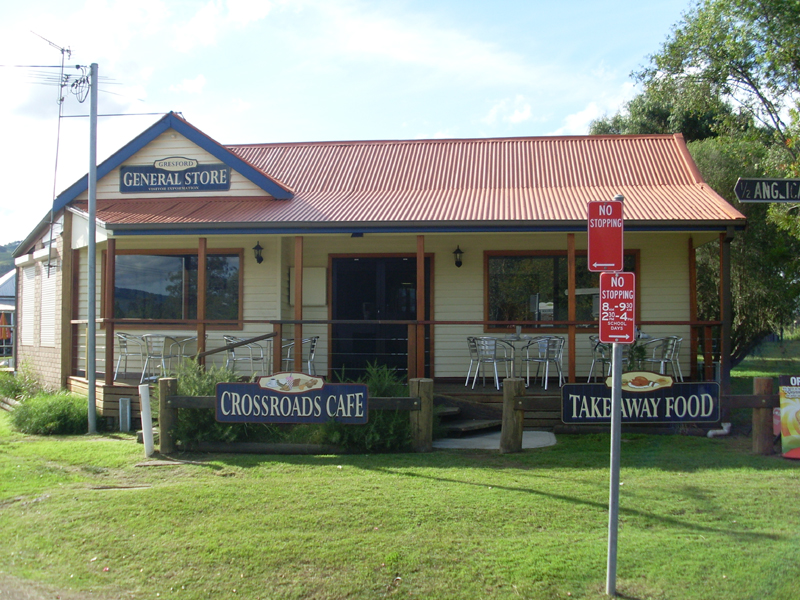 From there it was onto Buckett’s Way to Dungog (some fabulous little backroads between Gresford and the Stroud Road), Stroud Road and Gloucester. At Gloucester we joined Thunderbolt’s Way and headed north and fast towards our first night’s stopping place at Walcha. Despite Chris #2 having a close brush with a roo, we arrived safely just on dusk and settled in to the excellent Commercial Hotel. I had expected that we’d be at the familiar Aspley Arms, but the wires got crossed in the booking process so the Commercial it was. Both hotels are owned by the same owner and the standard of presentation and service was the equal of the Aspley. Another good find. A 3-bed room for $75 made for a reasonably-priced room for each person. 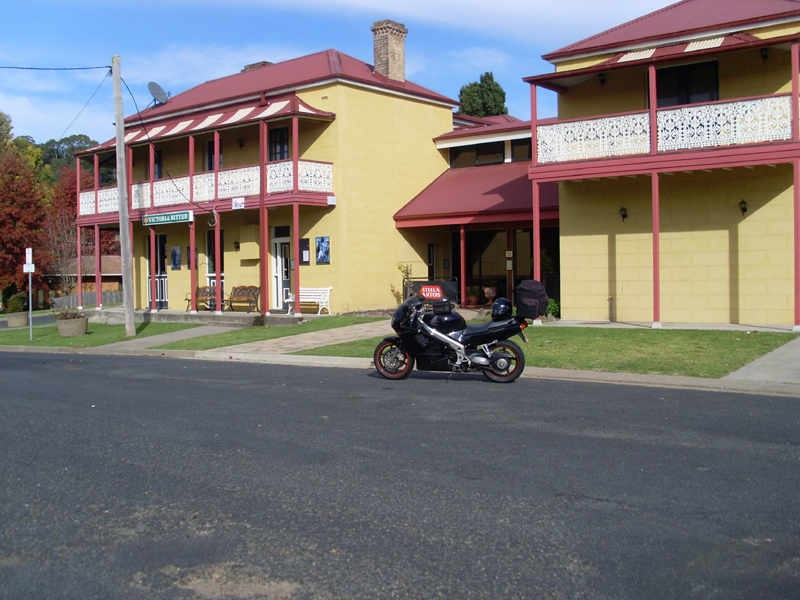 The dining room at the Commercial is much more of a 3-star restaurant rather than a bistro, but the meals were reasonably-priced and delicious. And the service was brilliant. Secure parking was also on offer behind a colourbond gate. When we went to roll the bikes in, however, there was a current model Commodore SS parked in the way. A plethora of antennae on it gave its highway patrol purpose away and the officer happily moved the car so that we could get in and then parked us in for the night. I don’t think I have ever felt so comfortable about the safety of my bike while touring!! 🙂

A comfortable night and a leisurely bowl of cereal and then it was fuel up and over to the equally excellent Walcha Hotel Cafe for breakfast. Again, highly recommended. Incidentally, a red original model Jaguar 3.8 E Type pulled into the garage just as we were leaving. Pity I didn’t get time to photograph it. 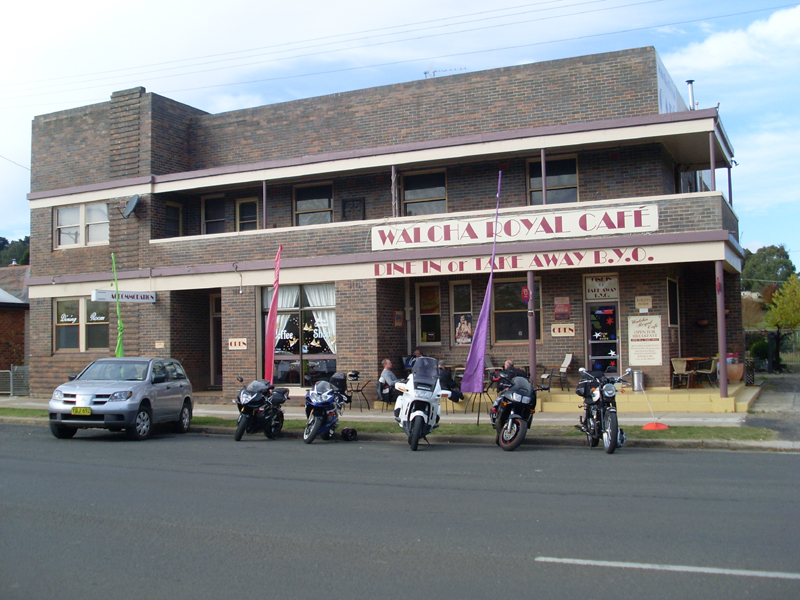 There was a heavy fog blanketing the town at around 0700 so we wisely waited till the weather improved before tackling the Oxley. In fact, breakfast was so leisurely that we didn’t suit up and leave till 1000. But that was OK because were were only planning on going to Nelson’s Bay on the Sunday so there wasn’t any pressure.

Ah, the Oxley, it never loses its charm. I fell into the n00b’s trap of trying to follow Chris #2 on his Gixxer for a little while, but realised how foolish that was and slowed to my usual pace and began enjoying the road again. Gingers Creek arrived far too quickly.

Chris #1 left about 10 minutes early so that he could set up to take some photos and then we headed. The only problem with the Oxley is, as I have remarked before, that every time you ride it, it seems shorter. Andy, Chris#2 and I arrived at the lookout at the bottom and pulled over and waited for the other 2. A little while and a German gentleman on an ST2 and his friend on another Gixxer pulled in. “Do you have a friend with a Thunderbird?” “Um, yes.” “Sorry, but he’s had a fall, about 20kms back. Slid off the corner and down into the bush. He’s got a sore wrist but, apart from that, he’s OK. It’s going to be hard to retrieve the bike, though.” 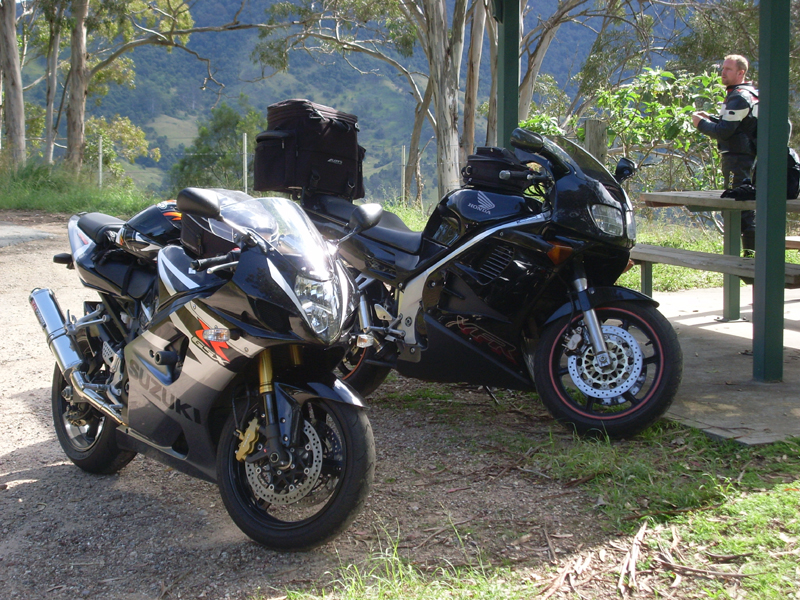 So we suited up and headed back up the mountain. Dale’s Trumpy was buried about 40 feet down in the jungle and a small group of other motorcyclists had gathered to try and help. With the aid of a strangler fig vine wrapped around the front forks, we muscled the bike back up to the road. It was surprisingly intact considering, the only major issue being that the front forks were twisted badly in the triple clamps and couldn’t be straightened (and, trust me, we tried).

At the same time, Paul,  an off-duty ambo who had been one of the first to arrive at the scene had made a sling for Dale’s arm out of his t-shirt and Chris had pumped some Panadol into him. After effecting the repairs that we could on the side of the road, Paul actually rode the twisted bike back up the hill to Ginger’s where it was safely stashed in a shed. The sight of him sitting off the seat on the right of the bike with the handlebars at a 90 degree angle to the front tyre and riding the bike like that was one which I won’t forget for a long while. The man is a legend.

Here I must say how proud I was to belong to a group of people who care as much for each other and motorcyclists do. Not one car stopped to even see if we were OK, but a whole shed-load of motorcyclists stopped and offered to assist.

Oh, by the way. While at Gingers, a car towing this bike pulled in. The owner had just been up the mountain to collect this immaculate FZR750 that he had bought on ebay for under $4000. 55000kms, Ohlins rear shock and registered till March 2010. What a bargain. 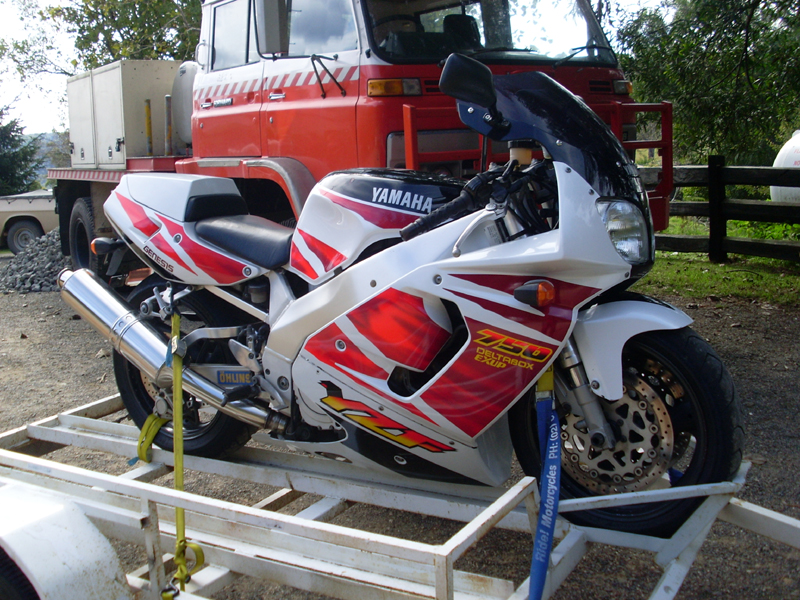 We distributed Dale’s luggage around the 2 S/T bikes and Chris#1 doubled Dale all the way down the mountain to Port Macquarie hospital. Around 80kms was a real trial for Dale, especially as the pain killers had started to wear off, but he stuck it out and we arrived around 1500.

Now, here’s an advertisement/testimonial for Port Macquarie Hospital. At 1500 Dale reported in. At 1510 he was examined. At 1530 he was X-rayed and, at 1600 he was shown the results of the X-ray. A bad break in the main bone of the wrist and radial fractures of the socket on the minor bone. Pretty serious. Two wonderful doctors advised us of the damage and appraised us of the alternatives, ranging from plastering the wrist as it was and allowing Dale to fly home to Canberra and continue treatment there to operating on the wrist at Port Mac. A quick confab with an orthopadeics friend of Chris#2’s and it was decided to have the wrist operated on there as this would improve the long-term recovery prognosis.

By 1700 the nurses were undressing Dale and prepping him for surgery and he had been hustled off to the theatre before we were even suited up and on the way out of the car park. Amazing. Tea at Port Mac (fish and chips on the river bank at the end of town, ah, someone has to do it.) 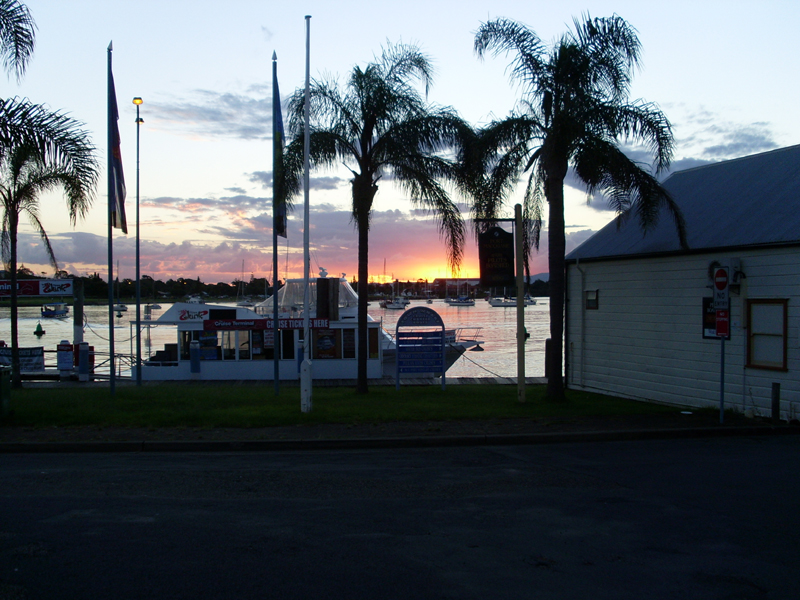 Unfortunately, the rest of the guys decided that they had lost interest in the rest of the ride and wanted to head straight home to Sydney. I was pretty disappointed with this as I’m sure Dale would have wanted us to complete the ride. But, it was a democratic decision so off we went into the night. By the time we got to Raymond Terrace I had decided that I, at least, would complete the ride, so I left the group and headed in to Toronto to stay the night with a friend while the rest of the guys pressed on. I never have enjoyed riding at night anyway and my left hand headlamp bulb had blown at some stage during the day as well.

Leaving the servo at Raymond Terrace I noticed a couple of spots of rain on my visor. I should have expected it as we had been seeing huge lighting flashes in the south for some time. A moment later it started belting down. Damn, no time to stop and put on the “wets” and no shelter either. So I crawled along to the BP at Hexham and suited up there. Amazingly, the water hadn’t seemed to penetrate my leathers at all.

After a refreshing night’s sleep, I headed across a familiar route to Cessnock, Broke and Milbrodale and onto the top of the Putty. A BRILLIANT run through the Ten Mile and stop at the Halfway House at Garland Valley. Sunday lunch time there is a visual and auditory feast (though not a culinary one, with customers ten-deep at the counter). 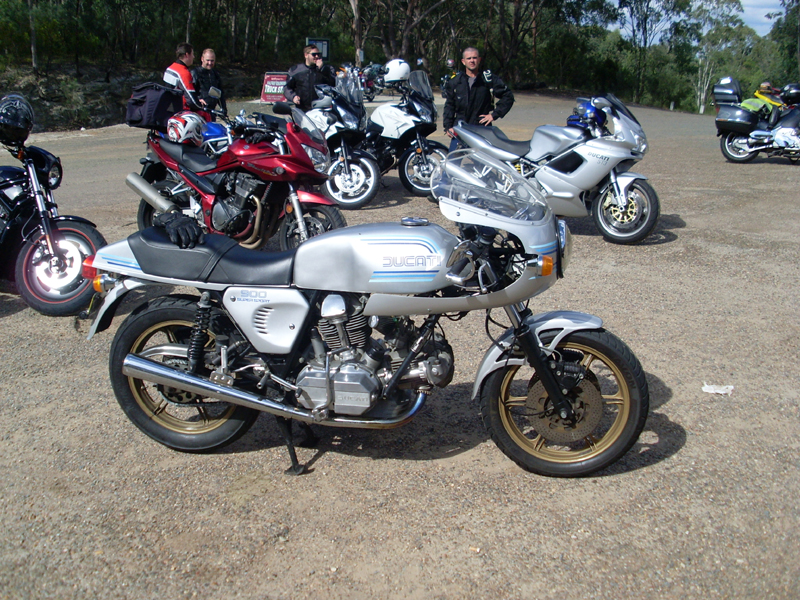 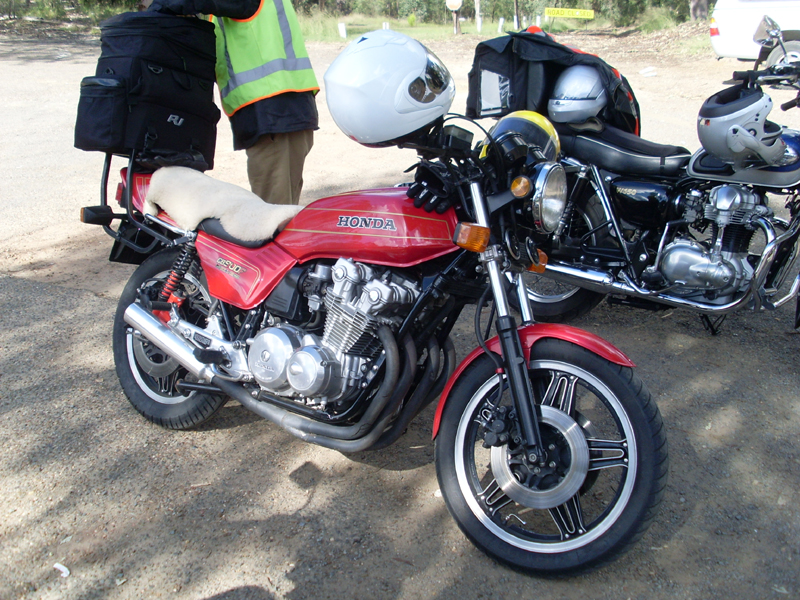 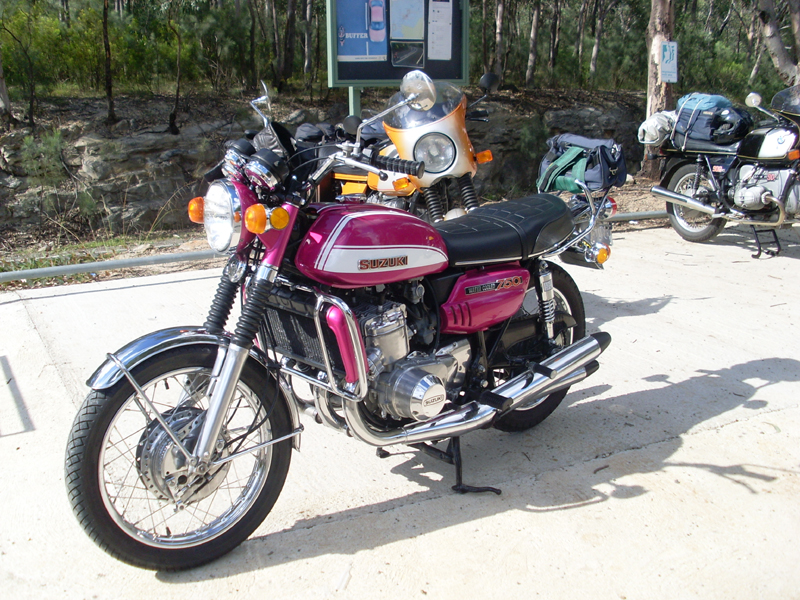 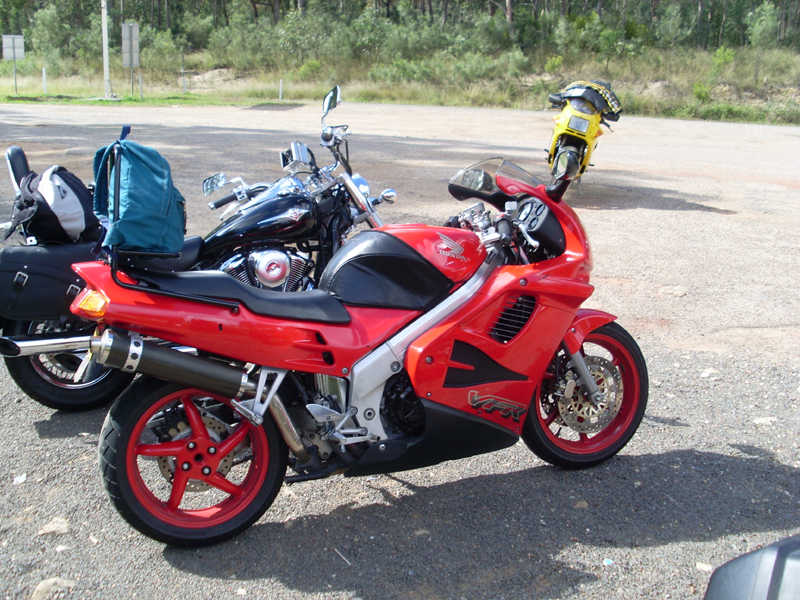 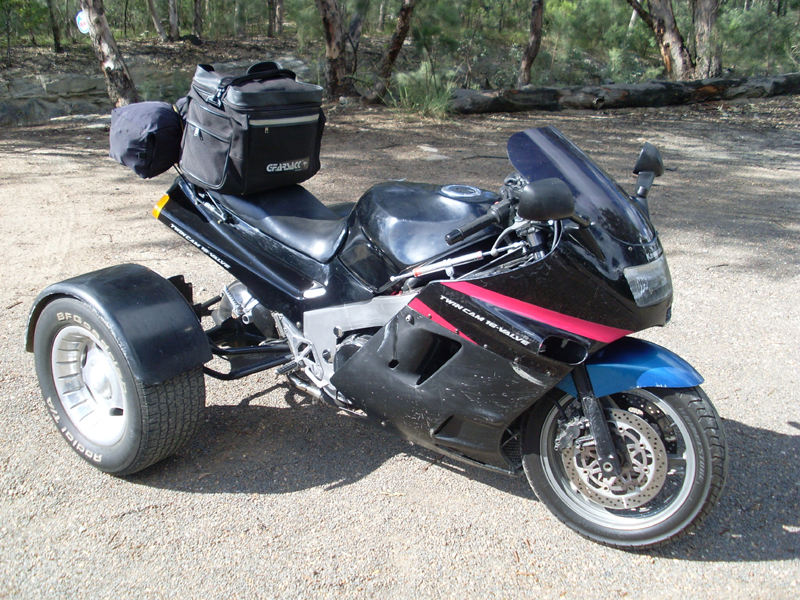 This one was a doozey!

So, no lunch, and back on the road. A great run down the Putty and then Windsor, Penrith and the backroad through Mulgoa and Silverdale. A huge crowd at Peppercorns meant that lunch would have to be delayed till the Pie Shop, which it eventually was. Down through Yanderra and Yerrinbool, along the South Road and into Robbo via the Tourist Road and Kangaloon.

Would I do it again? Of course!