You are here: Home / My Motobiography / Chapter 19 – Racing on the streets. Part 2

So, the first Road Closure was run and won. Stu Avant on the Dick Hunter Racing Suzuki RG500 was the big winner. Translating his vast experience at street racing in his native New Zealand, Avant was untoucheable, the nimble and powerful Suzuki Grand Prix bike proving to be the ideal weapon around Macarthur Park.

So many highlights of a weekend that remains etched in the memories of everyone who had anything to do with it. 30 years later, I still have motorcyclists say to me, “Hey, do you remember when they ran the races around the streets in Canberra?”

Stu was superb. He took on Murray Sayle on the Team Yamaha TZ750 Grand Prix bike and the late, lamented, Roy “The Boy” Dennison on his booming Kawasaki superbike and beat them all. Watching him (and many other riders) pull towering wheelstands as they ascended the hill in front of the spectator stand is an awesome memory.

Kiwi ace, Graeme Crosby was there, but his Ross Hannan Kawasaki superbike wasn’t. It was still in a shipping container on the wharf in Sydney, waiting for Customs clearance after returning from racing at the Bol d’ Or in France. John Fitzgerald, who was head mechanic at the local Kawasaki dealer sportingly offered “The Croz” the use of his Kawasaki Z1-R streetbike so that Graeme could race. The bike was stock standard so Croz knew he didn’t have a chance of winning anything so he tootled around at the back of the pack pulling outrageous wheelstands all over the place. Such a showman. He spent the rest of the day when he wasn’t racing it, riding around the footpaths that criss-crossed the infield of the circuit on the Honda CBX 1000 six cylinder production bike that he was due to ride in the Castrol Six Hour Production Race the following weekend. And it was on this bike that I “enjoyed” the 2nd most scary pillion journey of my lifetime. 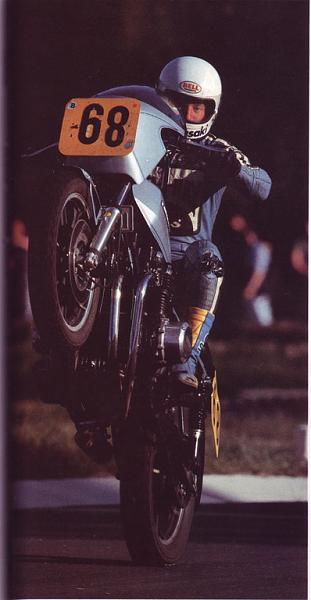 At the conclusion of the 350cc A Grade event, in which one of our Canberra riders, Murray Ogilvie, had finished a brilliant 2nd, I asked Croz, who was sitting beside the track on the CBX, to give me a quick lift back to the pits so I could congratulate Murray. I shouldn’t have asked. Croz took off with me clinging like a limpet on the pillion seat. Down through the infield streets he roared, and then onto the footpaths that led to the pits. These paths were hemmed in on both sides by tall grass, nearly a metre high and were sprinkled with “T” intersections. Did Coz care? No. He FLEW through this unfamiliar maze with me holding on for dear life, neither of us wearing any sort of protective gear of any kind. I was never more glad to get off a bike in my life!

For a small club with no experience in running a race meeting we had achieved a miracle. The riders were fullsome in their praise of both the track and of the way that we ran the meeting. The print media fell over themselves to congratulate us and letters to the two main motorcycle papers, Revs and AMCN were filled with the highest of praise. And, as for the pundits who said we’d never pull it off, we proved them embarrassingly and triumphantly wrong.

Oh, and I must add one more thing. The cooperation and assistance we received from the ACT Police was outstanding. They had told us that officers would be on duty to ensure smooth traffic flow, that’s all. Well, come race weekend, every motorcycle in the ACT Police bike division was on hand, both days, with officers not only assisting in traffic matters, but directing spectators to the spectator areas, moving people on from areas in which they shouldn’t have been standing and generally helping out in a myriad of ways. Without their help, running the meeting would have been much harder.

The event consumed nearly 9 months of the lives (and nearly cost a couple of marriages) of an army of club members and friends, and, when it was over, we couldn’t quite believe what we had done. But we did, and I’m proud to say that I had a big part in making sure that it happened.