Yep, the warmer days and the school holidays conspired to lure me northwards again. This time I had my brother for company and we headed off around lunch time on Monday. Lunch at Pie in the Sky before a run up the rest of the OPH, Peats Ridge and then onto the F3 through to Buladelah.

It was here that we took a small diversion onto the Wooton Road. It used to be the main highway until it was bypassed in the early 90’s and it was a notorious accident black spot due to a sweeping mountain pass that makes up most of the diversion. It used to be called O’ Halloran’s Gap and I still call it that. About 15kms of sweeping uphill and downhill twisties with not a car or a speed camera in sight. The mojo was running free and I absolutely monstered it, flinging the VFR at the corners like I have never done before. It was one of those moments when everything was “right”.

Unfortuately the fun part brings you back onto the Pacific again and we cruised along at 110+ till just after Taree when the sign said, “Roadworks in Progress Next 35kms”  Bah, 80km/h speed limit and double unbrokens ALL THE WAY. Just before the Port Macqaurie turnoff it opened out again so a chance to stretch the legs and go for it a bit at the end of the day.

Clean and tidy bedroom at the always-welcoming Port Macquarie Hotel right at the end of the main street. Dinner in a  lovely little Thai restaurant just next door and an early night in preparation for the day ahead.  Oh, there’s another Thai restaurant in town called the “Beau Thai.” 637kms for the day.

Up early and on the road before 0630. Fog blanketing the road from Wauchope to  Long Flat that started to clear as it always does just as you start to climb the mountain. I was hoping the the magic from O’ Halloran’s was still with me and it only took a few corners to confirm that it was going to be another one of those days. It all clicked and we crushed the 60+kms to the plains at the top. Paul was struggling to keep up, which is a first, though, in his defence, a balding rear tyre may not have helped.

Pause for a drink and to let the adrenalin settle. 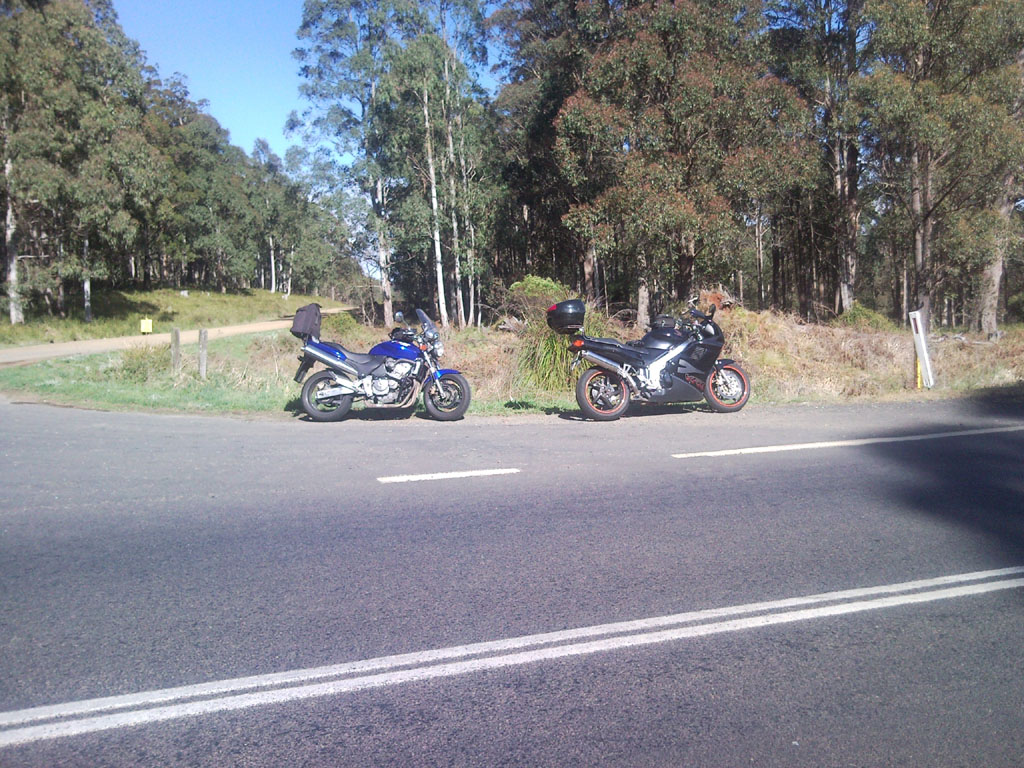 Then it was back down the mountain and it was a blessed repeat of the uphill run. Despite both of us agreeing that we couldn’t maintain the intensity of the uphill ride on the downhill, once the corners kicked in, it was go for it again. I am certain that my bike has never had its neck wrung as hard and for as long as the Oxley run yesterday. 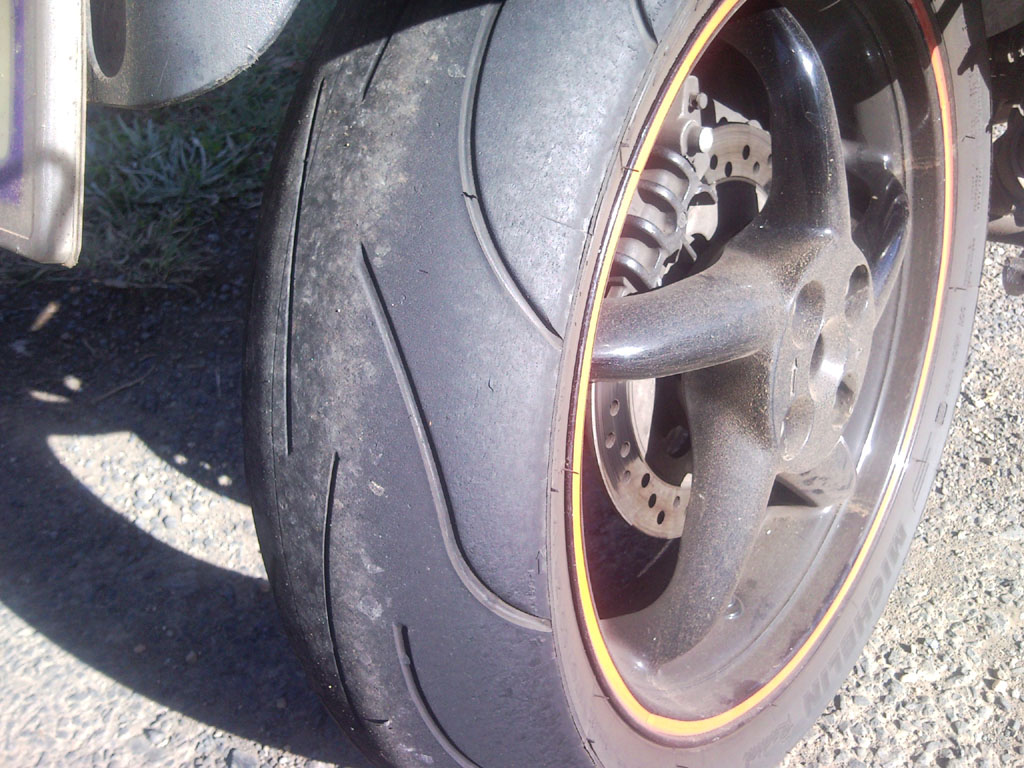 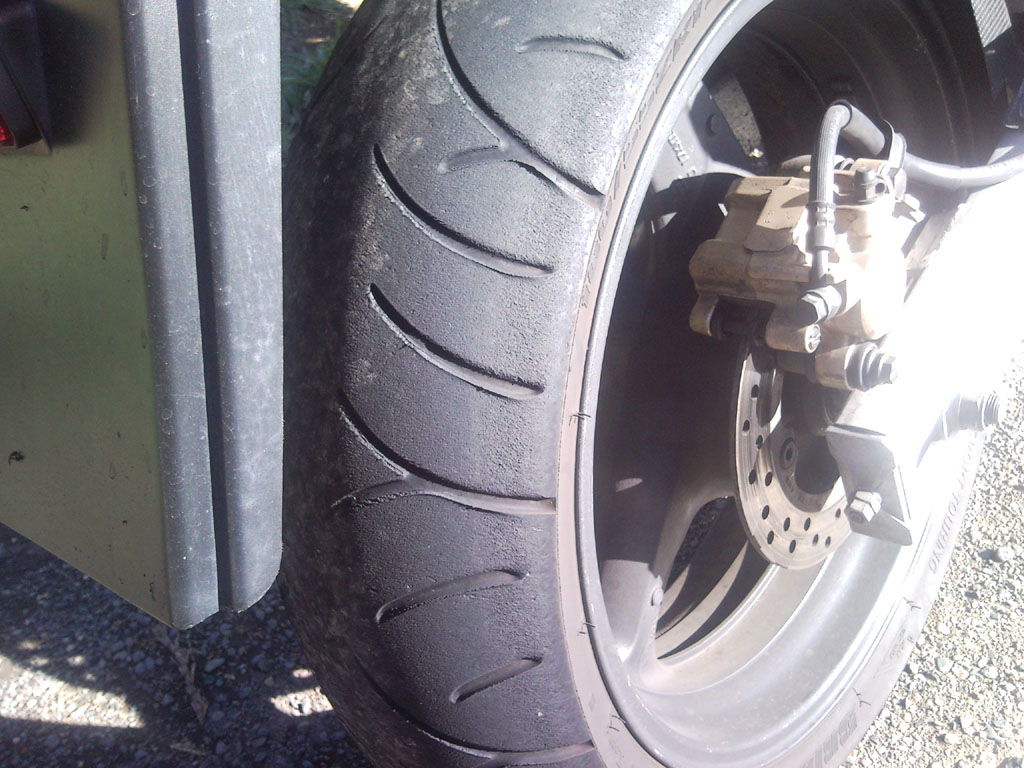 Fill up at the little servo just before the railway line in Wauchope where the always-friendly Warren McWirter loaned us the Windex as he always does for passing motorcyclists. Warren is a former BEARS competitior, owner of 6 Ducatis and always willing to help fellow motorcyclists. Drop in and say Hi.

We’d planned on staying the night at a friend’s place in Newcastle, so, after a huge country breakfast at the “Fuzzy Duck Cafe” (yes, I am serious) in Wauchope, it was onto the PH for the boring run south. For some time I had noticed a white patch in the middle of Paul’s rear tyre when I was travelling behind him and, when we stopped at Stroud for fuel, the reason became clear. It was down to the wires in the middle. No bike shops in Stroud, so carefully toddle in to Raymond Terrace. No bike shops there either so an even more careful ride in to Newcastle itself where, eventually and 75kms after discovering the damage, we pulled in to Graeme Morris’s shop at Broadmeadow. Yes, he could fit a tyre, would we like to go over the road to Macca’s have a coffee and come back in half an hour?

Graeme is an old road racer acquaintance of ours but I reckon it wouldn’t matter who you were, you’d get that sort of service – he’s just that sort of guy. So, not long after we were on the road again, refreshed and, more importantly, safe. 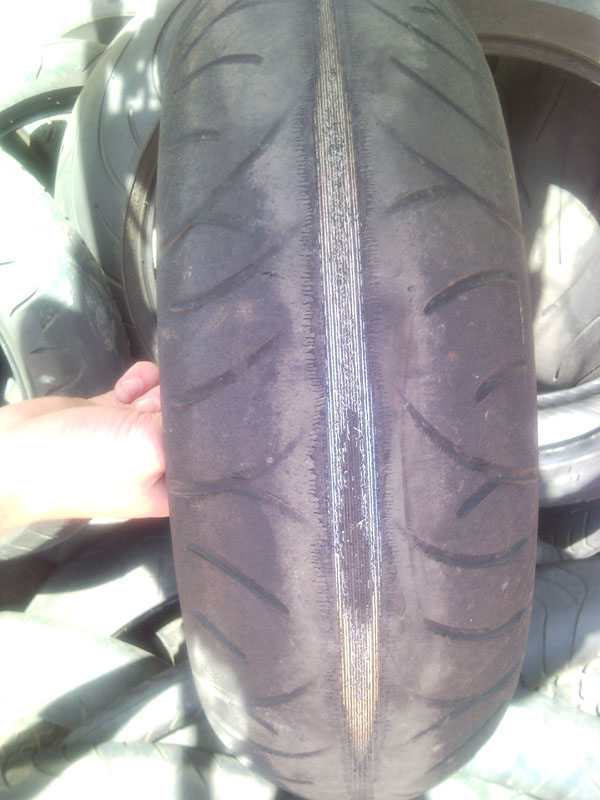 Our friend had a house full of visitors so that messed things up a bit, but we were both still feeling pretty chipper so we decided to head for home. So, out of Newcastle around 1730, heading south as fast as legally allowed. A run right down the whole length of the OPH (into the setting sun, pretty tricky) and a swoop up from Brooklyn on a newly-resurfaced section that’s a joy to ride. Threading through Sydney at quite a clip, avoiding the nutters in their cars, we landed home here around 2130, tired but exhilarated.

Total mileage for the trip, 1458kms, but, more importantly, 821kms in one day yesterday.

You can’t beat the open road.