You are here: Home / My Motobiography / Chapter 18 – Racing on the streets. Part 1

I guess I should start at the beginnning. In early 1978 a lady called Judith Bryant approached one of our club members, Ian Martin,  at a club meeting with a strange question. “Would your club be interested in running a motorcycle road race around the streets of one of suburbs down in Tuggeranong where the houses haven’t been built yet?” Ian was intrigued and brought her up to the front table where we were sitting, transacting the usual club business. He introduced her and she repeated the question.

I was intrigued also and aksed her for more details. It seems she had already approached the Motorcycle Club of Canberra with the proposal, but they weren’t interested as it wasn’t a dirt bike event. She had already done some preliminary research and had found that there were  hundreds of kilometres of freshly paved, kerb and guttered, housing estates in the Valley, lying idle with no apparent plans from government to do anything about them at all any time soon.

This I knew as I was living in Wanniassa, which was, at that time, the southernmost suburb in the Valley and I had already explored many of these roads on after-school expeditions and on weekends. Indeed, it was quite common to find motorcyclists “ear-oling” around these streets, using them as an unoffical practice tracks.

Further to that, however, of her own volition, Judith had actually approached the Department of the Capital Territory who administered the ACT at the time and asked about this idea and had received a very favourable response to the idea!

So, would WE be interested in pursuing the idea as a club? Ian and I looked at each other and the immediate, unspoken look that passed between us was, “Hell, yeah.” But we thanked her very much and said that we would take the idea to the next Executive Meeting and we’d get back to her.

Unsurpisingly, the idea was the subject of hot debate at the next Exec meeting with the pros and cons being discussed. Of course, it ended up as a decision that we WERE interested and that we’d like to pursue it further and see where it led. A Road Race Committed was formed with Ian Martin and the Secretary and we started making calls, writing letters and seeing what favours we could call in.

Remembering that many of our club members were public servants, working in some pretty high-powered areas of government and with all sorts of “contacts” it didn’t take long for us to find out that the DCT would look VERY favourably upon such a proposal were one to cross their table, with the provisio that the ACT Police would have to also have to give it their stamp of approval. Amazingly the police were also very enthusiastic about the idea and threw their weight behind the poposal.

Of course there was a great deal more paperwork and phone calls that had to happen before the event was to happen, but, essentially, the approval, in principle, only took a week or so. Amazing.

So, the search began for which estate would provide the best potential race track, and our members threw themselves unsefishly into the task. Hundreds of kilometres were covered by dozens of bikes, booming through deserted streets, scaring the kangaroos, all in the name of “evaluating” the layouts for race track potential.

Finally it came down to two choices, the Bugden Avenue loop, essentially a long road that ran around the rim of a small valley or the Macarthur subdivison. The Road Race Committee visited both layouts and decided that the Bugden loop was too long (around 6kms), too enclosed by rock walls at inconvenient places and a nightmare to administer, both from a safety point of view and also interms of keeping track of the races themselves. I might add that it would not have given spectators a full view of all of the circuit either.

So, Macarthur it was to be. The subdivision was a natural valley, surrounded by small hills and a large bank on the western side that immediately impressed as a likely spectator mound. This proved to be a good decision with around 10000 people standing and sitting there to watch the first meeting. It also lent itself to being the ONLY spectator area as the whole track could be seen from there and it would make spectator control much simpler. As it turned out, spectators found some other places to stand as well, but that decision certainly made our jobs easier on the days. 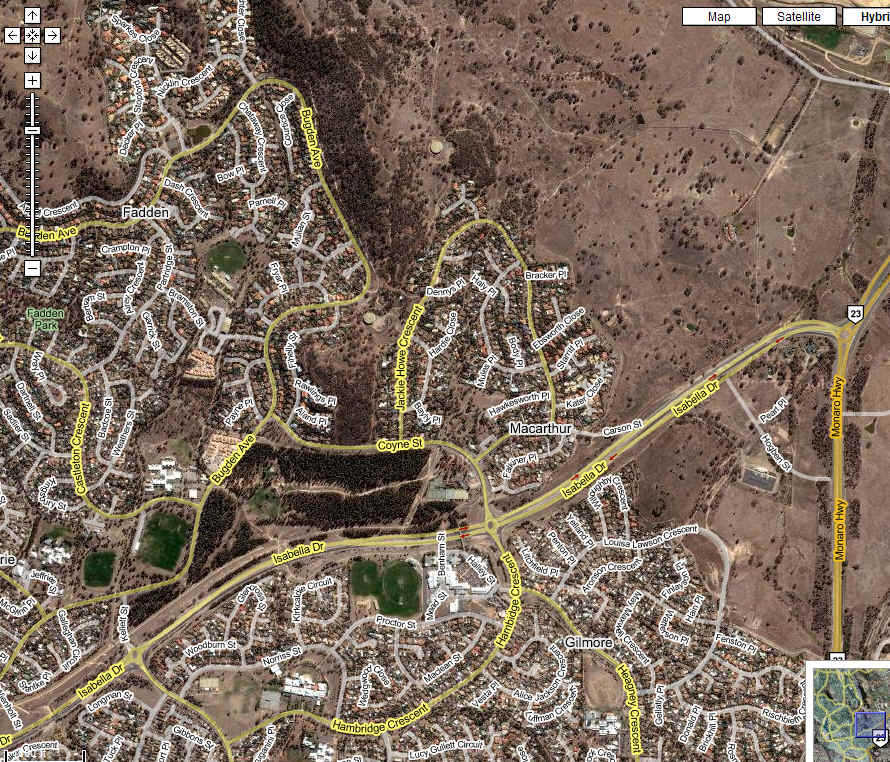 The layout of the track can be seen fairly clearly here. The picture below will make it clearer. 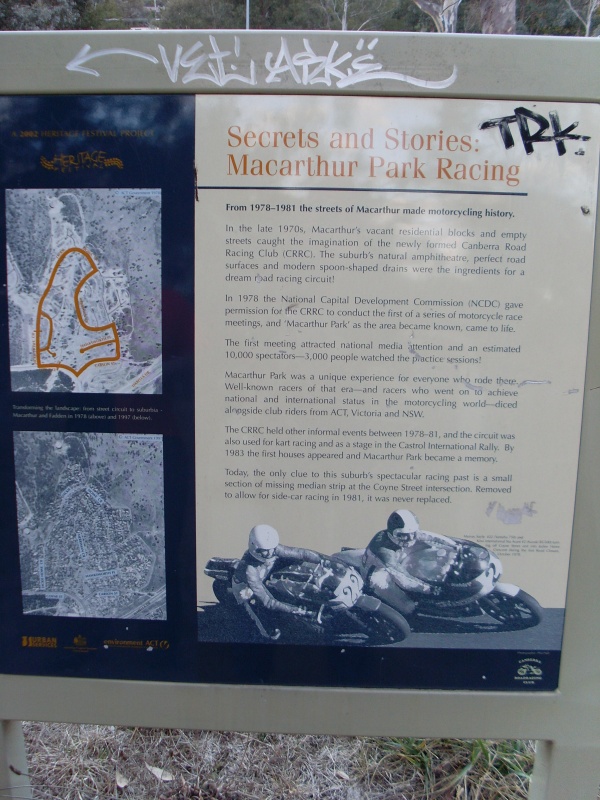 The track itself, was like a mini-Bathurst, 2.8km long for the layout we chose to use with spectacular rise and fall and a great mixture of fast and slow corners. The kerb and guttering in the estate was of the “spoon” variety so that was a great safety feature, as was the fact that it was already wired with underground electricity, so, no poles along the side of the track. When the riders finally did arrive and start practising on the Saturday they were filled with praise for the layout and declared it to be one of the best “tracks” that they had raced on.

The only potential safety difficulties with the track centered on the drainage apertures in the guttering and also the regular appearance of small concrete posts, about 20cm high that were placed on the footpaths to indicate where the fire hydrant access could be found. Both these problems were solved through the creative use of hay bales which, as we were in the ACT, we were allowed to use. Had we been across the border we would not have been able to as the then infamous NSW Speedways Act prohibited their usage at a race circuit. At the “top” end of the circuit the long, sweeping right hand bend had a stone wall around the outside and this too was padded with hay bales.

Inspection by the ACU of NSW’s Race Committe representatives gave us the “all clear” on both of these issues as well as many other, minor ones as well.

I can’t even begin to tell you how complex and time-consuming the arrangements were to actually make this thing happen. For example, we needed 3 kms of fencing wire and I can’t remember how many star pickets just to fence off the various areas of spectator stands and pit enclosures as well as restricted areas where nobody was allowed to stand. But I can tell you that, thanks to a tiny, but dedicated team, it DID happen, and, on the 2nd weekend in October 1978, less than 6 months from when the idea was first mooted,  the Inaugural Canberra Road Closure race meeting took place. Since we, as a club had zero experience in promoting race meetings, the ACU were very reluctant to allow us an Open permit and insisted, instead that it be a 5-Way Restricted Club Meeting. This didn’t really worry us as the best of the riders in NSW all belonged to the 5 big clubs anyway and the entry ended up containing the best riders available. Graeme Crosby, the internationally experienced Stu Avant, Ron Boulden, Roy Dennison and Jim Scaysbrook on the NCR Ducati, to name just a few.

That will do for now. In the next chapter I’ll tell you what happened in the first meeting and continue the story.