You are here: Home / Kel Carruthers – Tribute to a legend.

Most younger generation motorcyclists will have at least HEARD of Australia’s 2500c World Champion from 1969, but I wonder if they know just how important a figure he is in the world-wide scheme of motorcycle racing.

Here’s a brief Wikipedia article, but even it seems to be rather inadequate.

Here is a far more extensive one from the AMA Hall of Fame web site.

I never met Kel; he’d taken off for Europe before I really got involved in road racing, but I did see him race, sort of. In 1964 (I believe it was)  my brother and I went in to Newcastle to spectate at the Mattara Hillclimb, a round of the NSW Hillclib Championship that was held every year in the picturesque King Edward Park, overlooking the main Newcastle surf beach.

Imagine our disappointment when we found that we had misread the programme and that it was a BIKE hillclimb with the CAR one to happen the following weekend. However, bikes had wheels and an engine, so we stayed and watched. Looking back on it now, I don’t think either of us knew too much about it, and my only three vivid memories were the howling YDS7 Yamaha 2 strokers, the smell of burnt two-stroke fuel and the crushing domination of a young bloke from Sydney called Kel Carruthers who rode Jack Gate’s Honda 250cc 4 cylinder Grand Prix bike to the Fastest Time of the Day (FTD).

Ah. memories. If only we’d known how important that guy would one day become. Could have got an autograph!! 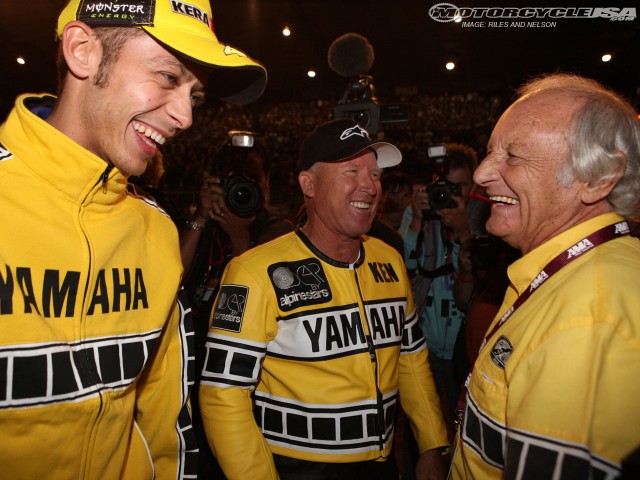 (Above) Kel with Valentino Rossi and Kenny Roberts at last year’s Indy Mile.

And here’s the official Yamaha video of Kenny’s run on the machine at Indy 2009.

Here’s an amateur video, not great picture, but listen to the sound!!!