The Harvie Wiltshire Memorial Trophy meeting was, and still is, one of the most important events on the road racing calendar in Victoria and certainly was, and is, the most important meeting promoted by the Preston Motorcycle Club in Victoria. In 1976 the event looked in doubt and what followed was nothing short of amazing.

To better accommodate the car racers (how many times have you heard that?), the management of Calder Park (the road racing circuit, not the Blunderdome) closed the track and constructed a wall right around the outside of the last corner going onto the main straight (similar in design and layout to the much loved wall around BP corner at Oran Park). Melbourne’s weather (you can tell the difference between summer and winter – in summer the rain is warmer) played its part in delaying the construction work and, faced with either cancelling or moving the event, the Preston Club shifted the event at the very last minute to Hume Weir, near Albury.

So late was the switch that the motorcycle media did not get time to publicise it and the meeting turned into a dismal flop as far as crowd attendance was concerned. So why would I want to write an article about it under the heading “Great Races”? Simply because what was to transpire that day could not have been imagined and so few people saw it that its deserves to be recounted by those who did.

Sunday morning was cold and overcast and the little track, set in the floor of a deserted quarry, was awash with mud and debris after an overnight storm. It took over two hours for the Club officials plus every volunteer they could commandeer (myself included) to sweep the track clean and make it suitable for racing. The local go kart club had actually booked the track for the day and turned up expecting to race. Fortunately a compromise was reached where the go karts ran their races and Preston Club ran the Harvie Wiltshire as well on the same day.

For those who don’t know Hume Weir, it was a small and often dangerous track. The surface was bumpy and grass grew through the cracks in the bitumen on the main straight. The back straight ran parallel with the front straight with only a 1 metre high concrete barricade separating them. It was unnerving in the extreme to flag marshall at the halfway point on the straight as you had bikes going past you at nearly top speed in both directions at once with only 20cm wide of concrete between them!

Run in a clockwise direction, from the Starting line, the bikes flew down into a sweeping right hander that then tightened up into a very tight downhill right hand hairpin that was taken in first at about 50 kph or less. Out of this corner, called Scrub because it was lined with trees at track’s edge both on the inside and outside, wheelstands were common as riders fed the power in and accelerated up hill and slightly to the left as they headed for the back straight. The straight was really a long curving left hander that went under a bridge, tightened left dramatically at the end and fed riders into a double apex right hander. Out of the right hander there was a short squirt, under the bridge, parallel to the back straight and into a tight, blind left hander. This flowed immediately into an equally tight right hander that continued heading right until it crossed the Start/Finish line.

It was the October Long Weekend. Bathurst Car Races were on TV, the weather was lousy, and no advance publicity of the change of venue was a deadly combination. But the racing, once it got under way, was breathtaking.

Most notable was the Feature Event, the Harvie Witshire Trophy. Held over 30 laps of the busy circuit, it, despite all the problems, attracted a great field of competitors. Most notable was Team Kawasaki Australia. They were the “gun” team of the seventies and, with the riding services of Murray Sayle and the late, great, Gregg Hansford, if they turned up at a meeting, they were expected to dominate and they always did. Fettled by the amazing Neville DoyDoyle, TKA bikes were producing more reliable horsepower and getting better results than any Kawasaki Team in the world, including the factory’s own GP effort!

TKA had brought along one of the new KR750 water cooled racers for Hansford and an older, but better proven H2R 750 for Sayle as well as the brand new longitudinal twin cylinder KR250 for Sayle to ride in the 250 race.

Facing the might of TKA in the main event were Bob Rosenthal (Yamaha TZ700) Kenny Blake (Yamaha TZ350; small, but ideally suited to the tight Hume Weir layout), Greg Johnson (Suzuki TR500) and the local hero, Steve Trinder on an ex-works Aermacchi 350. The bike was actually badged as a Harley Davidson!! as HD had purchased the Italian Aermacchi concern in its entirety to try and gain a foothold into the European market. It was a parallel twin, amazingly similar to the Yamaha TZ250/350 engine and it had taken the Italian Walter Villa to two World Titles in 1975, the 250 and 350.

The race began with the customary dynamite start from the two TKA riders, but coming up out of Scrub for the first time, it was Hansford and Sayle with Trinder mixing it with the big bikes and right up with the leaders. By the next lap, Trinder had passed everyone except Hansford and was looking like he wanted to take first. The partisan Albury crowd, sensing an upset, climbed onto the tops of vans, trailers and anything else solid (the pits were inside the track perimeter) and began urging Steve on. When I say crowd, I really mean pit crews and officials in the pits. There was no crowd in the spectator stands at all.

But, as was to the pattern of Steve’s career, enthusiasm gained the upper hand over caution and, coming into Scrub on Lap 2, Trinder dropped the model. However, rather than pack it in, he quickly remounted, and took off after the leaders! His fairing had been badly damaged in the fall and he was forced to slow and rip most of it, except the front number plate section, off. He then set to, to roars of approval, making up time on this, his home track.

Amazingly he caught the pack quickly and was soon on Hansford’s tail again. Then the astonishing sight unfolded of Trinder actually passing Hansford and leading him across the line at about half race distance.

An interesting note is that REVS, in its race report, said that Trinder had ranged alongside Hansford but that Hansford had closed the gate and stopped Trinder getting in front. Such was the NSW/Victorian rivalry at that stage that the NSW based journal couldn’t bear to report that the “invincible” Hansford had been passed by a Victorian rider. AMCN, however, the Melbourne based journal, reported the race as I have, noting that Trinder did, in fact, take the lead and hold it. Indeed, in editing my copious slide collection recently, I found my photos from this meeting with one shot clearly showing Trinder easily leading Hansford into the braking area of the left hander coming out of the Loop.

As he ranged alongside Hansford the remaining section of Trinder’s fairing began to come off. The part that carried his number, plus the remains of the perspex screen began flapping so badly that a piece of perspex flew off and whistled through the air uncomfortably close to Hansford’s neck. His comments after on how close it actually came are not repeatable in this journal!! The Albury crowd was going beserk, but their joy turned to disappointment as Trinder had to again slow and pull the rest of the fairing off.

While he was doing so, he was passed and had to try and work his way back to the front from fourth place. In the closing stages he managed to pass Rosenthal , but the gap to Sayle was too great and he had to settle for third. So it was another 1-2 for TKA, but the cheers that greeted Trinder when he returned to the pits far exceeded those given to the glamour TKA team and even Neville Doyle declared himself to be impressed!

In my recollection, I can say that I saw Steve ride better races throughout his career, but I never saw him ride a more exciting one.

But the day was to contain two more events, both of which were to be proven to be historically interesting. The first was in the 250 A Grade where Murray Sayle took the then new KR250 twin to its first win anywhere in the world. The works Kawasaki team was using them in Europe and Kawasaki Great Britain had one for Kork Ballington, and Kawasaki in the USA was also using them, the great Eddie Lawson beginning his GP career on one. But it was TKA that scooped them all and I was there to see it. Ballington was to go on and win two 250 titles and two 350 titles on the KR250/350 in 1978 and 1979.

Then, in the last race of the day, fate played its final hand. Local motorcycle dealer John Foster took out a brand new Kawasaki Z650 four cylinder in the Registered Touring race and won easily from Yamaha RD350 mounted Kim Jones (elder brother of AUSCAR and NASCAR king Brad Jones) and Yamaha mounted Albury rider Rob Phillis (yes the same Robbie Phillis that went on to win four Australian Superbike titles) A trifecta to Albury riders into the bargain. It was the first race victory for the Z650 anywhere in the world.

Neville Doyle, TKA supremo, watching closely from the sidelines, was first to congratulate Foster and then to announce that Hansford and Sayle would ride the bike in the upcoming Castrol Six Hours production race at Amaroo Park. But that’s another story.

Murray Sayle winning the 250cc race. The first race win anywhere in the world for the longitudinal twin Kawasaki. 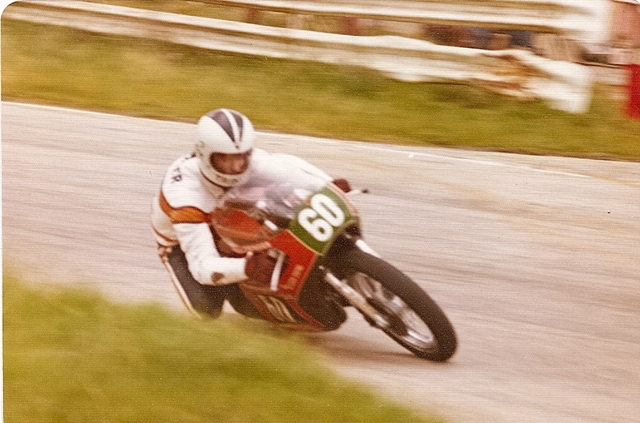 Steve Trinder during his epic ride in the Trophy Race. Note: This photo was taken early in the race when the bike still had a a fairing!! 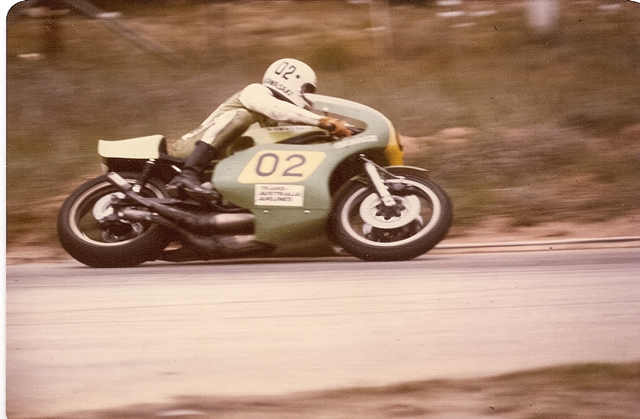 Gregg Hansford won the race, but the day belonged to Trinder.