You are here: Home / Book review “One Good Run” by Tim Hanna 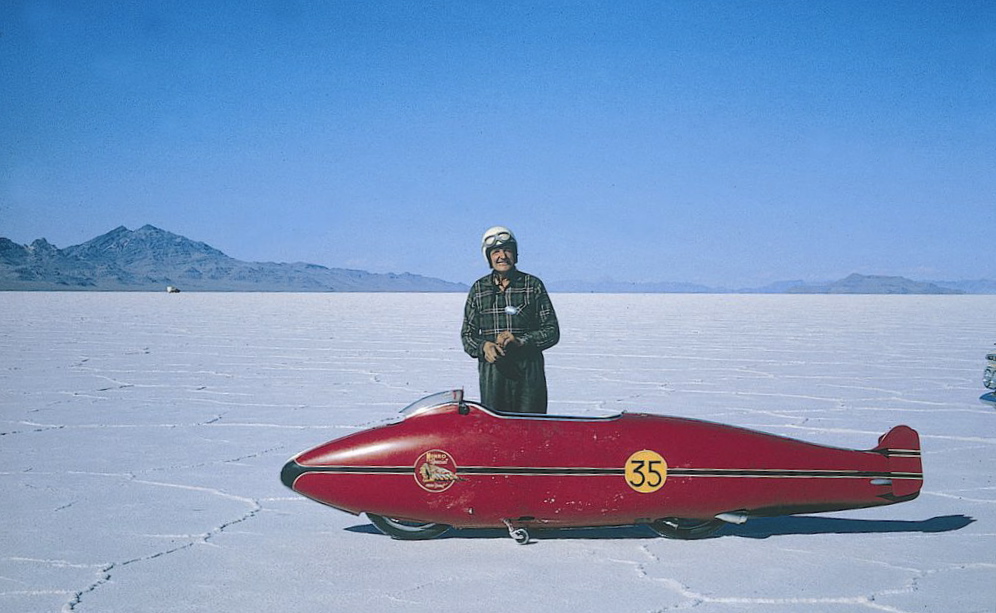 Thanks to a good mate of mine, I’ve just finished reading the above book. It’s the biography of  Burt Munro, the New Zealand motorcyclist who inspired the movie, “The World’s Fastest Indian.”

It traces Munro’s family history from its beginnings in Scotland through to Munro’s death in 1978. The movie only mentions it as a postscript, but Munro actually visited the salt flats at Bonneville 14 times, each time attempting to break the 200 mph barrier on his bike, based (loosely) on a 1926 Indian Scout of 600cc capacity.

In its final iteration, the bike ended up a streamliner, with an engine displacement of nearly 1000cc but it steadfastly refused to exceed the 200 mph barrier in both directions (required to be ratified as a record). The bike did do the magic 200 in 1964, but only in one direction.

The book is well written and sympathetic, and the writer does not gloss over or try to disguise Munro’s abrasive and sometimes appalling character traits, merely excusing them as the manifestation of a unique character who insisted in doing things his own way.

And it is the exposing of Munro’s single mindedness (arrogance, in my book) that is the most disappointing aspect of the book. By the end of the book I had ceased to regard Munro as a “motorcycling speed legend” that the writer (and the movie) would like us to accept him as being. Instead I came to see him as a talented engineer and fabricator who could have achieved enormous success and fame if he had only shut his mouth and listened to the good advice that other clever engineers consistently gave him.

Time after time, Munro returned from Bonneville disappointed with the mechanical unreliability of his machine, but the fact is that that very unreliability was entirely of his own making. His insistence on doing things his own way against the best advice of others who knew record-braking far better than he, saw the salt littered with the shattered remains of engines, gearboxes and other mechanical components year after year.

I really wanted to be sympathetic; I really wanted to see Munro as a legend, but, in the end, I was bitterly disappointed. Munro was an egomaniac who was lucky to achieve what he achieved given his propensity for doing exactly the opposite of what he really should have done.

Read the book for yourself by all means. It lifts the lid on the Golden Era of LSR endeavour; Breedlove, the Arfons brothers, Nathan Ostich, the Vescos, Cal Raybourn, etc. It’s definitely worth reading. But be prepared to discover that the hero of “The World’s  Fastest Indian” really had feet of clay and prevented a great deal of the success that he could have had through  a serious flaw of his own character.