In the years that I have been riding I have had my share of “offs’, but, I am pleased to  say, none that caused me serious injury and none from which I couldn’t ride away afterwards. And I must also say that the majority happened in my early years of riding and were the sorts of novice mistakes that every new rider makes.

I dropped the RD250 in a patch of gravel at a “T” intersection at the back of Denman one night. I shouldn’t have been riding up to the intersection crowding the centre line. If I had been where I should have been, I’d have missed the gravel patch.

I was tipped off the RD a couple of days after I got it in Oak Flats. A car came up beside me in my lane just after I had turned onto the main road and caught my handelbar and I went down. Low speed, minimal damage.

I had a BIG “off” from the 400/4 at the top of Macquarie Pass. I hit a big pothole right in the middle of the corner and the bike bucked and came down on its right hand side and slid across the road and came to rest in the gravel on the opposite side of the road. I got up without a scratch, having ridden the bike, like a sled, lying on its left hand side with my legs stretched out behind me until it came to a stop. Bent levers, but rideable. The next morning the only mark I had on me to show that it had happened at all was a bruise the size of a 50c coin on the inside of my left thigh. Pretty lucky. Later that same day, as I was returning home to Canberra, I saw a Ducati Darmah, badly damaged, being loaded into a ute. The rider had hit the same pothole and he and his passenger were in Mittagong Hospital, both with broken legs.

I dumped the 500/4 on its side just outside school one day, just after I’d done the front fork/disk brake combination. I was experimenting to see how quickly the brakes would skim off the water and grip. They did both a little quicker than I was expecting.

I also locked the front on gravel at the Albion Park Rail roundabout when I pulled over to the side quickly to investigate a funny “flapping” noise from behind me. It was the flap on one of my throw-over panniers. Again, no damage except to the pride.

I “dropped the model” in Fyshwick one day when a car turned into a driveway straight in front of me and I just had time to brake, but not quite enough to stop. I kissed the car’s back bumper bar and hit the deck. Again, rideable, but a sore knee for a few weeks afterwards. The car had no working stop lights and no working indicators, but it was still my fault as I had been travelling way too close to him.

I have detailed eslsewhere my accident on Macquarie Pass in 2007 that resulted in the loss of my beloved red VFR750 so I won’t duplicate the sad tale here. My first prang for many years and it was quite a shock, believe me.

Of course, there have been plenty of “near misses”, but they don’t count. Most of them are survived more by good luck than good management.

Of all of these, the one that still scares me the most is one that happened late one night on the Hume Highway between Marulan and Goulburn. I was on the 500/4 so it must have been around 1980 and I was riding home from a winter road race meeting at Oran Park. In those days I used to hang around for the trophy presentations…

As I dropped down the hill to go over the creek at the bottom, I noticed the the bike had started to slow. The further I went, the slower it got, so, at the bottom of the hill, I pulled over to investigate. As I got off the bike, I nearly fell over. Somehow, I was still attached to the bike. I looked down and, in the dark, I saw that my scarf had come undone and had become entangled in the rear sprocket. It was gradually being munched up and was getting shorter and shorter as more of it was dragged into the sprocket.

Visions of Isadora Duncan sprang into my mind as I got out my penknife and cut the damaged scarf away before getting back on the bike and riding home. I still get the shivers when I think of that night.

I should have known that, if I started a thread like this, it would happen again, and it did. Updated 7-08-08.

As I was preparing to leave school in Sydney this afternoon, I noticed a big, black storm cloud hovering to the south. “Hope I can get home before it rains.” I thought, but  took the precaution and put on my textile pants over my jeans just in case.

As it turned out, the decision was a wise one. There were a few spits of rain along the way, but it was looking like I might just fluke it until I passed the Picton road turnoff and started heading up the hill to the Mt Keria turnoff. Suddenly I noticed this white stuff all over the road. It’s amazing that it takes a few seconds for stuff like that to compute, but I quickly realised that it wasn’t snow, as I had originally thought, but huge drifts of hail, with the wheeltracks of the cars in front of them making black lines though the white.

Already there were accidents and people pulling over to the side of the road. Cars were sliding around and everyone that was keeping going, was keeping going really slowly, and I mean REALLY slowly. I figured it was safer to keep going rather than pull over and risk someone aquaplaning into me as I stood there helpless watching.

All was going well. I was in 2nd gear, doing about 20km/h when the Bimmer in front of me slowed suddenly. I was nowhere near him, but I slowed as well to keep a safe distance and also moved a little to one side to improve my visibility. As I did the front wheel crossed a drift of ice and the bike started to slide and I knew that I was going to be a passenger.

Down she went. I performed the advisory “keep your head up off the road as you slide” manouever and watched as the VFR performed a graceful ballet of circles on its right hand side, skidding down the road away from me. I remember thinking, “Please don’t hit the Bimmer.” as it seemed to gather speed away from me, but the car was moving more quickly and the bike was already slowing down (although it skidded an enormous distance; very little friction to slow its progress, I guess).

I jumped up and ran to retrieve it. It was lying in the middle of the lane like a beached whale (You’re beached is, broo). Two drivers of courier vans who had stopped, rushed over to help me pick it up and, once I had gotten it into neutral, wheel it to the side of the road. Thanks, guys; they really were very helpful and considerate of my plight.

On the sidestand on the side of the road, I knew the bike was damaged, but it started 2nd go on the button and all I was interested in doing then was getting out of there, so I tip-toed off (literally) and navigated through the piles of ice (15-20cm deep, all across the road) and the rivers of water that were coursing across the road to the drains on the edge. I maintained my balance by basically keeping my both feet just skimming the road and fighting the skids every time they occurred. Traffic was almost at a standstill and the northbound lanes were completely stopped. Police cars were trying to get their way up the hill, but they were snarled up in the traffic at the bottom of the mountain and couldn’t make any progress at all.

It was FREEZING cold, leading me to believe that it could have been snow, but I’m now sure it was a hailstorm, and one of Biblical proportions.

The bike is a mess. Fairing damage to the top, middle and fairing lower on the right hand side will ensure that it is going to be an insurance job.

And me? I’m sitting here writing this in warm, dry clothes and totally uninjured. I was wearing my RJays armoured jacket, my back protector (on which  skidded for some considerable distance – I think I know what a turtle feels like now), my armoured textile pants and my MotoDry Black Ice winter gloves.

The lesson? All the Gear – All the time. 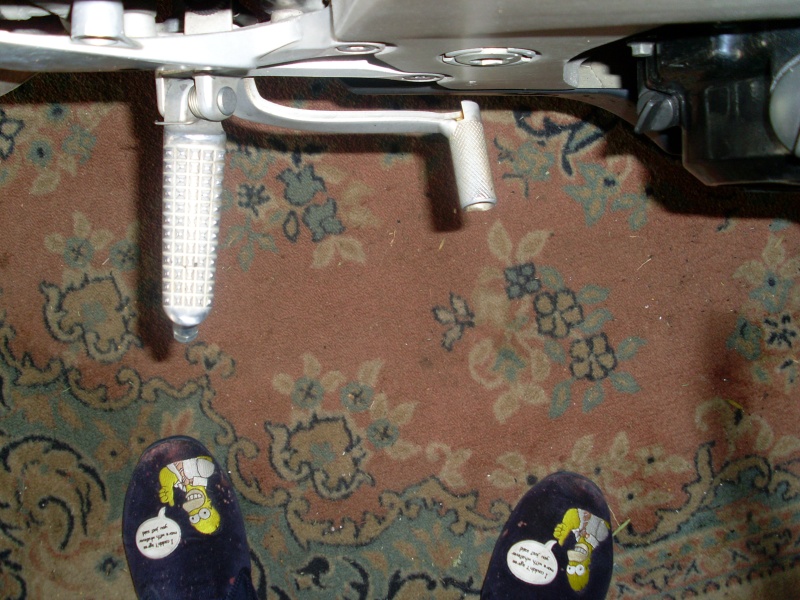 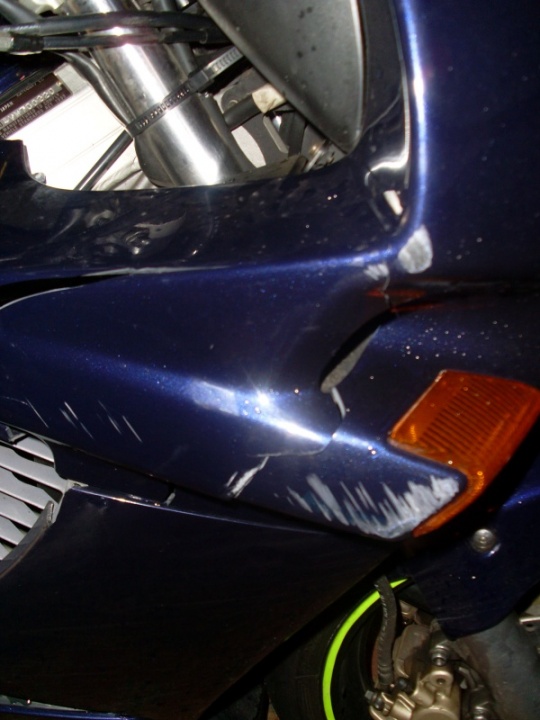 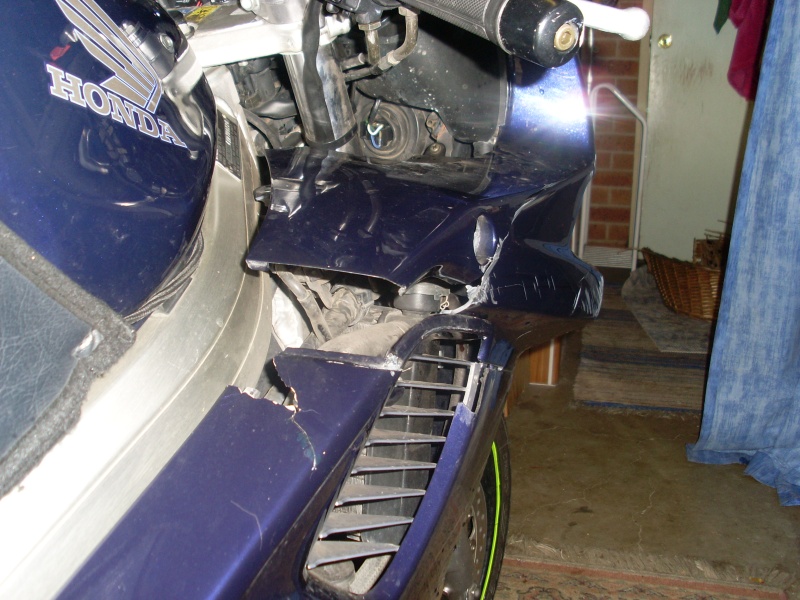