You are here: Home / Graeme Crosby – the Kiwi larrikan.

Amongst the great names that have graced our tracks over the years, the one that is remembered with probably more affection than most is a man who, though he didn’t in fact win many races, left an indelible impression upon the scene and upon everyone with whom he came in contact. The rider is, of course, the Kiwi ratbag, Graeme Crosby. I have already recored one memorable incident in his career on another page (I can outbrake him) so I won’t go over it again.

As this Wikipedia entry records, Crosby was an amazing rider as well as one of the most ebullient chracters to ever strap on a helmet. As my series is devoted to riders that I have actually seen race, I feel that I have the right to add some more detail about this wonderful man.

I first met Graeme at Oran Park in late 1976. He was racing an old Kawasaki Z1 that he had brought from New Zealand with him, and he was spectacularly fast. 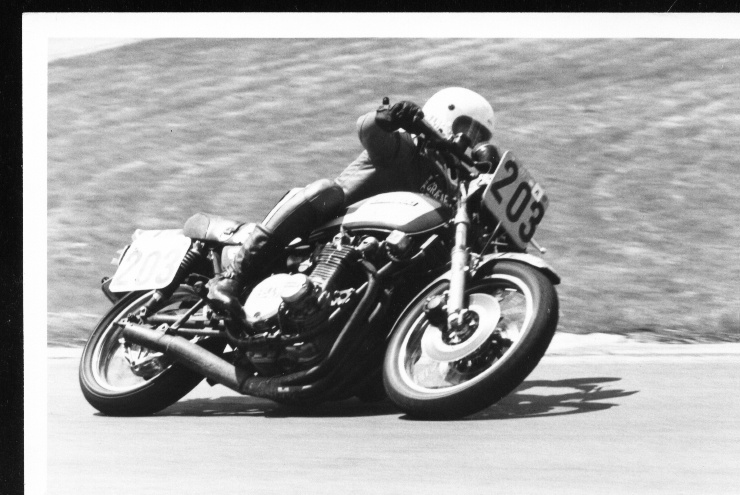 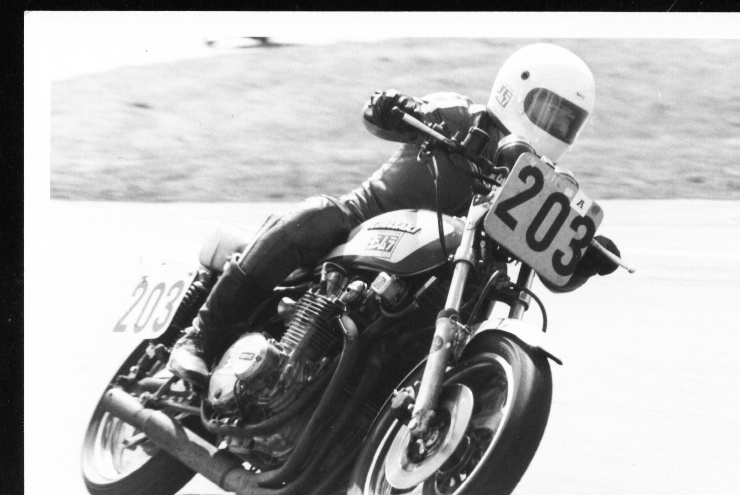 2 of my old black and white photos, taken from outside the fence at BP corner at Oran Park.

Needless to say, it didn’t take long for his forceful style to be noted and appreciated. Along with Stu Avant and “Gentleman” John Woodley, Kiwi riders were certainly making an impression on the Australian scene. Sydney tuner, Ross Hannan, stepped up and hired “The Croz” as he quickly became known, to ride his very well developed Kawasaki Improved Production race bike. It was a perfect match. Croby rode the bike with great success for a couple of years as well as showing his extreme versatility by riding a Honda 125cc Grand Prix bike as well as production bikes in the very popular production sprint and endurance races that were proliferating towards the end of the ’70’s.

To give you some idea, here’s Crosby’s record in the Castrol Six Hour Race, Australia, and the world’s, premier production bike race of that era.

Crosby raced in 4 races on machines varying from a 900SS Ducati, to a six cylinder Honda CBX 1000. He never won the race, his finest distinction being securing pole position by nearly half a second in 1978 on the CBX. But for entertainment, Crosby was the king. In 1977 he was protested for dangerous riding as he “fenced” another compeitior around the back of the circuit. The protest was quite properly dismissed. In 1978, after setting pole, he, Greg Pretty and Neil Chivas staged an impromptu sprint race late in the afternoon that had the respective team managers and officials tearing their hair out and race officials desparately trying to black flag the trio. When they finally “cooled it” and returned to the pits, the three had strips torn off them by all concerned. The irrepressable Croz took it all in his stride, however.

In 1978, Crosby rode the official “works” Kawasaki Z1R Mk2, entered by Team Kawasaki Australia, sponsored by electronics giant, Akai and carrying the weight of everyone’s expectations upon his back. Crosby was paired with a Japanese factory rider but carried the majority of the practice and qualifying load, ending up 2nd on the grid.

However, at the drop of the flag at 1000, when the dust from the Le Mans start had cleared, the field had cleared off and Crosby was still trying to get the Kaw to fire. Finally it did when the field was already deeply into its first lap. In just a little over an hour, working his way through slower traffic, Crosby had taken the bike into the lead just in time for the first scheduled pit stop. Unfortunately, no sooner had the bike returned to the track than the Japanese rider binned it, and, despite Crosby running over to pick it up and return it to the pits, was out of luck as the Japanese rider had been transported to hospital by helicopter and Crosby would have exceeded by a considerable amount the time allowed for each rider to ride in these endurance events.

The interview with Crosby when he got off the bike after that first pit stop was the classic of the day, as it often was when a microphone was near. Will Hagon, mike in hand, approached Croz as soon as he got off the bike to seek an explanation for his failure to proceed an hour earlier.

Crosby, seeing Hagon coming, promptly put his helmet back on, BACKWARDS. Hagon was completely flummoxed and everyone around about the Kawasaki pit dissolved in helpless laughter. When he finally took the helmet off again, Hagon asked, “Well, Graeme, what happened?” Crosby simply replied, “I stuffed up.” More helpless laughter. As is so often the case in history where great endeavours are brought down by simple errors, it turns out that the mechanic had turned the ignition off to save the battery while the bike was parked on the grid. Crosby, expecting it to be ON when he ran across the road to the bike, spent valuable seconds trying to figure out why the bike wouldn’t fire, completely overlooking the fact that there were no dash lights showing so it was obvious that ignition wasn’t on. Easy to criticise now in the cold light of day, but, in the heat of battle, an easy enough error to make.

Backtrack just a month or so. Oran Park, August 1979. Crosby was already planning his assault on the overseas races and had entered the NSW Championship race at Sydney’s top track. But his Kawasaki superbike was stranded overseas somewhere (probably on its way back from the Bol d ‘Or, like had happened the previous year at the Canberra Road Closure), so Jim Scaysbrook (of “Old Bike Australia” fame) loaned his fearsome Yamaha TZ350 road racer to The Croz. Now Croz had never ridden a two stroke before and many were questioning Scaysbrook’s wisdom, if not sanity.

Those who fell into the latter camp looked like being proven correct once practice started. This day Graeme was to coin a saying that has gone down in history, featuring in many places including the Kawasaki Sports Bike Riders Club’s T shirt. The saying? “Which way does the track go and what’s the lap record?” It was said that Croz’s riding style was so radical that most riders only risked a couple of laps of practice with him out there, pulling in and leaving him alone to practise.

In the Senior race, for bikes up to 500cc, Crosby quickly settled in to 2nd place and was making an audacious move for the lead, trying to pass Stu Avant on the RG500 Suzuki for the lead around the outside when the bike high-sided him into the wall at BP Corner. Climbing on to the top of the wall to rapturous applause from his legion of fans, Croz walked over to the fence, accepted a can of beer from a spectator and stood there watching the conclusion of the race. When the race was over and the recovery vehicle arrived, Croz hopped back down onto the track, looked across to the infield where I had recorded the whole gruesome incident on Super 8 movie film and asked me, “Did you get that?”

Now it may sound as if Crosby was just a crasher looking for a place to crash, and, in his early days, he certainly had his share of spills. But, at the same time, his bike control was awesome, especially considering the unwieldy nature of those rudimentary superbikes. And he certainly showed how good that training was when he ventured overseas to eventually get a 2nd in the 500cc World Championship, the premier class of world racing. Add to this his win in the prestigious Daytona 200, Imola 200, Suzuka 8 Hour race and an F1 race at the Isle of Man and you can see what I mean.

I enjoyed watching him race and interviewing him on a number of occasions. He was the perpetual joker, but, when the visor came down, he was the consummate professional.

To me, and to his loyal followers, he will always be, “The Croz.”