As Jerry Reed said in his famous song, “When you’re hot you’re hot, when you’re not, you’re not..” Valentino Rossi is certainly experiencing just that at the moment. While some would say his performances on the GP11 ARE hot, given that it’s such a chien to ride, most would admit that it’s a bit embarrassing for him to be circulating around in the minor placings, well off the pace, on a bike that Casey Stoner regular won on last season.

Well, last night, just to rub it in, it happened again. There was a huge “do” at Silverstone to mark the opening of the new facilities there and, as part of that, Valentino was asked to do some laps on a bike. Now, he’s not allowed to ride a MotoGp bike due to testing regualtions, so they rolled out a suitable tarted up WSBK bike. 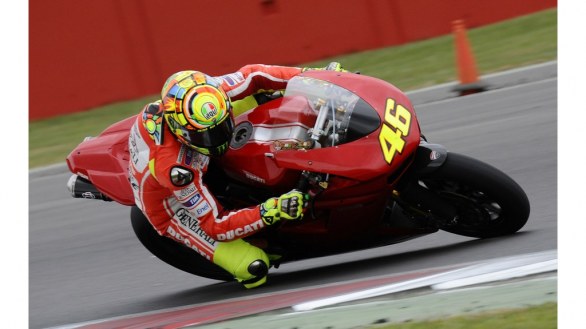 Embarrassingly, the thing broke down in full view of the assembled dignitaries and it couldn’t be restarted. So a stock 1198S, complete with all running gear, was trotted out, and Rossi did his demo laps on it instead. *mutter, mutter, mutter*

Still at the “hot” end of the scale, the media simply won’t let the Simoncelli/Pedrosa scuffle die away, this amusing cartoon being published overnight. 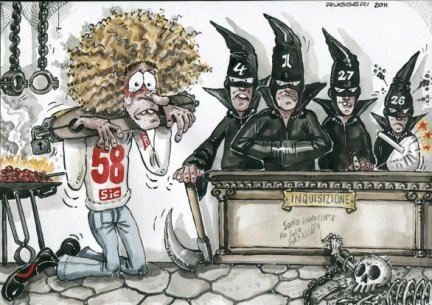 “Nobody expects the Spanish Inquisition.” Funny, but the cartoonist put Pedrosa’s left arm in plaster when it should have been his right.

From the “cool” end of the scale, this. 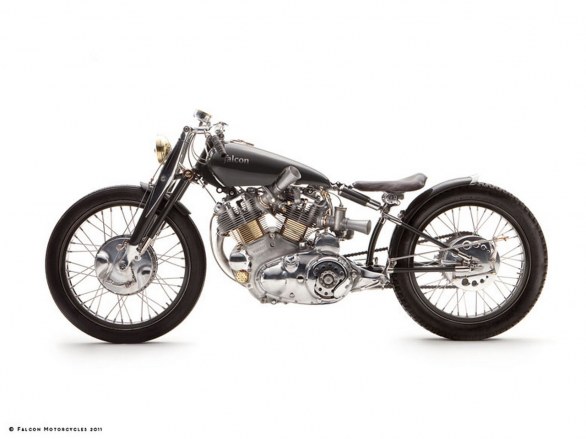 It’s called the Falcon and it’s based on a real Vincent V-Twin engine. I LOVE the bronzed barrels. I’m including this one in my Fantasy Garage list.

Also at the “cool” end of the spectrum,  Casey Stoner and the HRC crew were at Jerez testing the 2012 MotoGp bike and having a wonderful time of it from all reports.