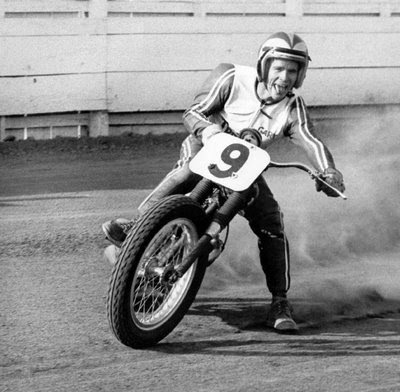 Legendary hard man of American motorcycle racing, Gary Nixon, passed away on Saturday, aged 70 after complications arsing from heart surgery set in. Gary had already been hospitalised earlier this year after an accident on his farm while felling a tree, but this latest setback was not related. he had been admitted to hospital and had had two stents inserted in arteries in his heart. He was in ICU, apparently, when he suffered cardiac arrest and was unable to be revived.

Nixon, who made his name as a two-times AMA champion, member of the all-conquering Suzuki road racing team and then the Hansen Kawasaki team, was an AMA Hall of Fame inductee and was known and loved by all the American road racing fraternity. Equally at home on tar or dirt, Nixon was one of the true all-rounders that the AMA racing system fostered.

The late Barry Sheene used to wear a Gary Nixon T shirt because, he used to say, he’d have liked to have been as tough as Gary Nixon.

RIP one of the last true hard men of racing. Reference the 4 Hour at Wakefield yesterday. It seems that I have been the purveyor of incorrect information. The results sheet as shown in the link I published yesterday is incorrect and I have now been told that it may be some weeks before the officials are able to decipher all the information from the “black box” and publish a correct result sheet. My apologies for any confusion.