You are here: Home / Remembering Maxie – one year on.

Yesterday was one of those days. The sort of day that you know you have to have but wish you didn’t. It was 1 year ago on the 11th December 2010 that a wonderful motorcycling identity in the Illawarra, Max Pinch, died in a head-on collision with a truck in Kangaroo Valley. At the time it sent shock waves through the tight-knit local motorcycling fraternity. Max was a legend, a man to whom all of us looked up. A former “A” grade road racer and fearsome rider, we all respected Max’s reputation and his undoubted riding skills.

It seemed inconceivable at the time that something like that could happen to Max. Others could have accidents (and did), but Maxie seemed impervious, with skill to spare and a wonderful, friendly personality to boot. Max had just completed a round Australia ride on his 650 BMW and was brimming with stories and anecdotes from his adventure. That Sunday was one of his first rides since returning from the trip and he chose to do it on his 50th Anniversary R1. Not long before the accident he remarked to a friend that he “just didn’t feel comfortable” that day. Hardly surprising given the huge differences between the 4 cylinder sportsbike and the single cylinder GS with which he had ridden around the continent.

But Maxie’s number came up and it stunned us all. It was, without doubt, the hardest funeral I have ever attended, coming just a few short weeks since my own, eerily similar accident on Macquarie Pass. And when the minister read out my own obituary to Maxie, published here, entitled, “A sobering day” I lost the plot and blubbered like a baby. Time to go home.

Yesterday, Maxie’s partner, Jen, organised a memorial ride and Maxie’s good mate, Peter McGiness, spread the word throughout the community and a great crowd of people turned up for a ride to the Pie Shop and then on to Kangaroo Valley pub for lunch. 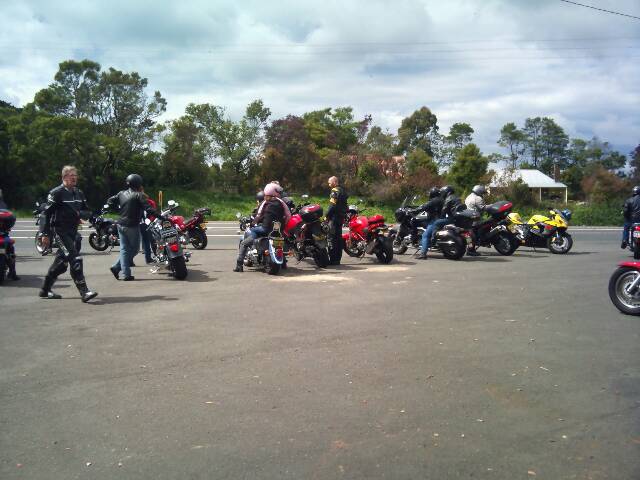 It was a fitting tribute to the memory of a man who quietly touched all of our lives. Plans are now in place to put in place a permanent memorial to Maxie at the Pie Shop to join those already there to other fallen riders. I couldn’t think of a more fitting thing to do.

Oh, and Happy Dozens Day to you all. 🙂