You are here: Home / A pilgrimage of sorts

Wikipedia defines it thus, “A pilgrimage is a journey or search of great moral or spiritual significance. Typically, it is a journey to a shrine or other location of importance to a person’s beliefs and faith.” If that is a fair definition, then my trip to Melbourne this week was a pilgrimage. You see last Thursday, the 9th of June, was the 30th anniversary of the death of my great hero, Kenny Blake, during the running of the Senior TT on the Isle of Man.

Every years since Kenny’s death, a group of his friends and acquaintances has gathered on the 9th June, at the Astor Hotel (now called, far less imposingly, “Percy’s Bar and Bistro”) to remember Kenny and pay tribute to that memory. It says volumes for the love and affection that he engendered in people that this tradition has continued, uninterrupted, for the last 30 years.

I have been to the reunion before, but it’s been a long time. The last time I went I remember sharing some time with the late Kirk McCarthy, as well as other luminaries. This year, being the 30th, I long ago determined that, come hell or high water (or recalcitrant and slow recovery from injury) I would be there to remember Ken.

The hardest part was going to be getting to Melbourne and back. Flying was out because, even though the fares THERE were ridiculously cheap, the RETURN fares were 3 times dearer (June Long Weekend). Besides, it would have also required hiring a car, an expense that would push the cost way past that of doing the trip in the car. BUT, could I manage a 2000 km drive when the furthest I had managed so far was just over 500 kms in a day? Well, there was only one way to find out. I set out on Wednesday afternoon after my morning physio (good report) and afternoon Fracture Clinic (also a good report). It was a bitter day, the temperature down along the Cullerin Range south of Goulburn being 2 degrees and feeling a lot colder than that due to wind-chill. Good thing the car has a ridiculously good heater.

I made it to Albury around 2000 and booked in to my favourite motel, pretty pleased at how I’d managed. A good sleep and on the road about 0730 along the boringest piece of road in the known Universe and into Melbourne about lunch time. Ignoring my stupid GPS which kept trying to get me to go on the tollway, I made it out to Springvale to the Botanical Cemetery there where, with the help of one of the staff, I found where Kenny’s ashes are buried. 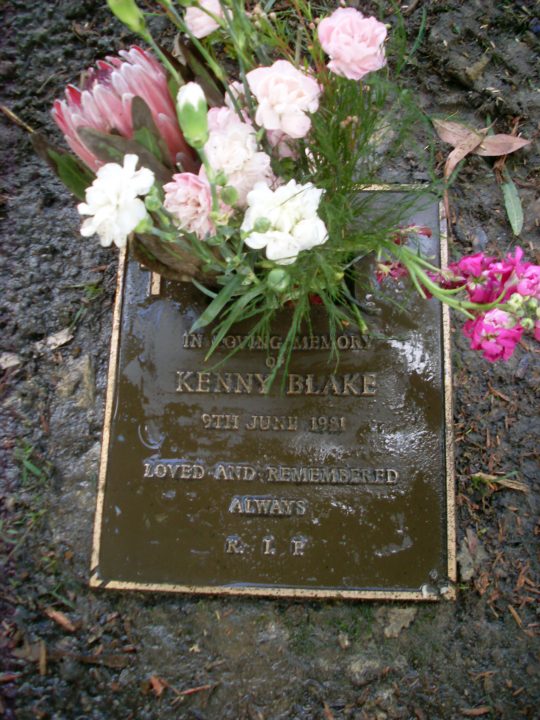 A big thank you to Graeme Crosby who told me that Ken was buried here. I always thought that he’d have been buried in Strathalbyn, but this cemetery is, fittingly, just across the road from Sandown Park Raceway.

From there I headed in to Carlton and arrived to find the gathering in full swing. In fact, it had been a luncheon (I didn’t know that) and some attendees had already left, bummer. Anyway, that was a minor consideration. It was SO good to catch up with such a lot of great people, some of whom I hadn’t seen for such a long time. It was especially good to meet Kenny’s sister, Yvonne and also one of his best mates, photographer, Robin Lewis, whose work rates a whole section of its own on the Kenny Blake Memorial Web Site. It was especially good to renew acquaintances with Ray Quincey, tragically paralysed in an accident in Belgium in 1978 and confined to a wheelchair since then. In 1976, Ray had achieved the distinction of winning 3 Australian titles in the one year and was widely regarded as the Next Big Thing. It’s 30 years last March since I saw Ray last when he shared the commentary box with me at Macarthur Park in Canberra. The club flew Ray to Canberra to be the “expert” commentator and he did a superb job.

So, the time passed so quickly. Despite having been offered a place to stay in Melbourne on Thursday night, I elected to put some distance between me and Melbourne (and its crazy drivers) and shorten the trip home on Friday in the process. I topped off the fuel, hit the road and made it to Benalla around 2130, booked in and slept the sleep of an honest labourer. That set up a much easier day yesterday and I pulled in here to Wollongong late in the afternoon having accomplished an over 2000 km drive without a relief driver and still able to get out of the car and walk. An amazing achievement and a surprise to everyone including myself.

1. I have to get a GPS that is programmable. Mine kept trying to steer me onto the tollway and didn’t allow me to vary that. REALLY annoying.

2. I now remember what it is that is wrong with Victorian roads; they let Victorian drivers drive on them. Seriously bone-headed driving all round.

3. The conduct of semi-trailer drivers on the Hume has improved out of sight. I am seriously impressed with their courtesy and professionalism.

4. Amazing what you see out on the highway. How about (in close company) a Jaguar 3.8 MkII sedan, an Austin Healey 100/4, a Jaguar XK120, a Jaguar “C” Type AND a Jaguar “D” Type. Now whether the last two were genuine examples of the marque or Lynx or Proteus replicars I don’t know, BUT, all these above-mentioned open cars were being driven, open-topped, on the highway on Wednesday afternoon when the temperature was close to zero. A little later I saw 5 Sunbeam alpine sports cars heading north on the Hume and yesterday afternoon I saw 6 FJ/FX Holdens heading south.

Would  do it again? Probably not, but if it was to pay my respects to the late, great Kenny Blake, I’d do it in a heartbeat. A definite pilgrimage worth doing.