You are here: Home / Coals to Newcastle.

It seemed like a good idea, so Paul and I did a day trip to Newcastle to visit friends yesterday. The plan was to go up the coast road and home via the Putty, but, with the temperature nudging the high 30’s near the lake, we figured it would be a lot hotter than that inland so the Putty got scrapped.

Anyway, up to Hornsby and on to the Old Road. (Oh, a slight detour at Hornsby to fix the Hornet’s cooling fan that had ceased to operate. A new fuse and a checkover from the efficient staff at Procycles and we were on our way). A fabulous, traffic-free run right to the end of the Old Road (pie and a milk shake at PITS, of course), and then up through Gosford, Ourimbah and out onto the F3 for a short dash to the Morriset turnoff.

By the way, I must mention the lovely memorial to Alan Hales that has been erected by the people at PITS. Alan, of course, was a winner in the Castrol Six Hour production bike race, and a regular rider of the Old Road. Unfortunately, he suffered a heart attack while riding the Old Road late in 2007 and died.

NOTE: You may click on these thumbnails to access a high-res version of each of these photos. The 5mp camera in my new Samsung Omnia seems to work quite well. 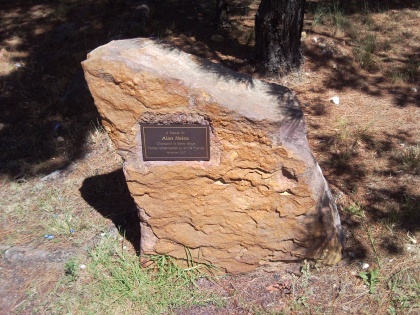 The inscription reads, “A tribute to Alan Hales. A champion in so many ways. Fondly remembered by all his friends. November 2007.” 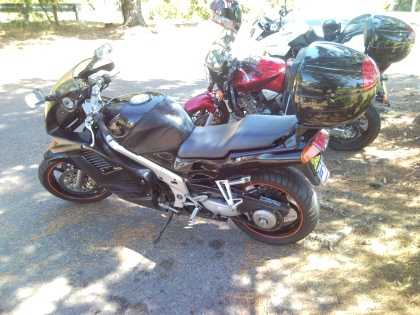 After some very pleasant time spent with friends we headed on back southwards. It was 35 degrees and the heat inside the helmet and the boots was starting to tell, so we decided to stop at Croudace Bay for a cool-off. Some time spent in the shade and a paddle in Lake Macquarie cooled us down well and we were ready for the run home. 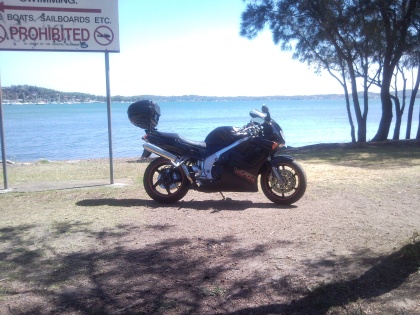 So, it was back on the road again. Successfully picking up the top of the Old Road (ahem) we paused at The Slab for the obligatory photo shoot. 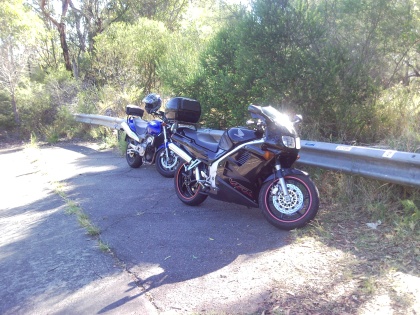 Then we stopped again at what remains of RWC. Now there’s a lot of chatter on various forums about the future or otherwise of this once-popular biking venue. Accepted wisdom is that the new owner was a motorcycle-hater and would have been very happy to see no more bikes on the Old Road ever. It was also said that RWC was going to be demolished and houses or such-like put in its place. He was also said to be going to build and open a new (non-biking) cafe further down the road.

However, photos taken yesterday seem to cast a very different light upon the situation. Plainly the original building is still intact, and the sign above the site says, “Closed for renovation, opening again soon.” 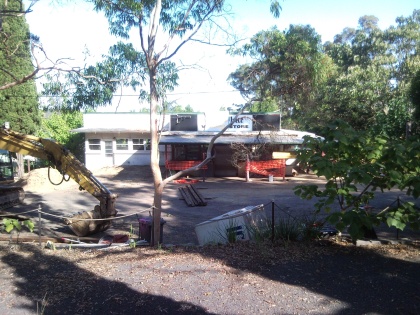 It is this next shot that I find most interesting, however. 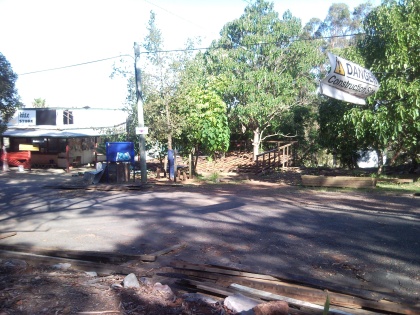 It can be clearly seen from this photo that a huge extension of the property is under way with floor joists already laid (including an existing tree poking through). Some sort of decking looks like it will be going in there. So if “re-opening” means what I think it means, then the cafe could very well re-appear in greatly extended form, on that site. Whether it will be motorcycle-friendly, of course, is quite another thing.

Anyway, we wound our way through Sydney and got home about 2000 last night, tired and a bit over-heated, but grateful for another great day on the road.