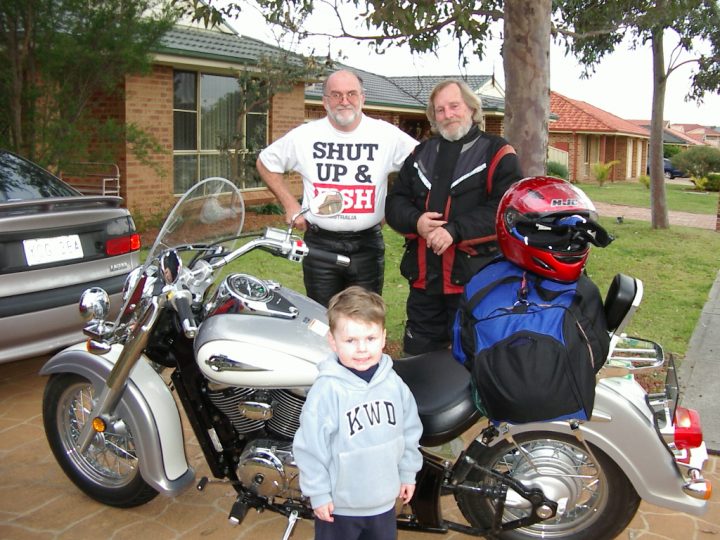 Last night I received another of “those” phone calls. Diane Morton from Canberra letting me know that my good mate and riding companion, Hilary Morton, had passed away after a long battle with cancer. To say that I was devastated is an understatement as Hilary had contacted me a couple of months ago to tell me that his treatment was going well and that he was now walking around unassisted.

I first met Hilary over ten years ago when I was appointed as the IT Manager of Brindabella Christian College in Canberra. Hilary was the Manual Arts teacher who ran his workshop with a mixture of Nazi strictness and adherence to the OH&S rules and warm compassion for the children who he had been called to teach. The more “unruly” students at the school dreaded his classes as they knew that they wouldn’t be able to get away with anything but, at the same time, reserved their most obvious expressions of affection for this quietly spoken gentleman who lived out the Christian ideal without ever having to say so in words.

Needless to say, I soon realised that we were kindred spirits. Hilary was an unreformed hippie, living in a rambling house on acreage just out of Queanbeyan. He played the dobro , the unamplified version of the steel guitar, and could often be found in the main street of Queanbeyan, busking and handing out gospel tracts to those who stopped to listen. On wet days he drove an old Chrysler Sigma that had long seen better days. The rest of the time he rode an old 1980’s Suzuki GS250 that somehow managed to defiantly keep going despite Hilary’s neglect and lack of mechanical skills and sympathy. In his cluttered garage were the remains of all manner of mechanical and musical devices including his beloved “postie” bike that had, for many years, served as his sole means of transportation. Indeed, it was the same Hilary Morton who gave the definitive response to the question, “Why don’t riders wave to each other any more?” when he told me once that the highlight of his motorcycling career was when a Harley rider nodded at him!

Not long after we met, Hilary’s first wife, Annie, passed away after a defiant battle with cancer. Despite pleas to have her hospitalised, Hilary steadfastly nursed her until the end and Annie’s funeral was as much a celebration of the love that Hilary had for her and his devotion as a husband as anything else.

One of the provisions of Annie’s will was that Hilary buy himself a new bike so it wasn’t a surprise to me when Hilary turned up at my place on a gleaming new Suzuki 800 cruiser. He loved that bike and it was on the cruiser that he really learned to ride properly. In spite of his lack of long-distance riding experience, he immediately organised a 5 day tour of Victoria with some of his bike-riding mates in Canberra and I was invited. We set out to explore Victoria, all the other riders on cruisers and me on my VFR750, what a sight we must have made. In the short space of 5 days I saw Hilary mature from a tentative, nervous rider to a confident distance performer. 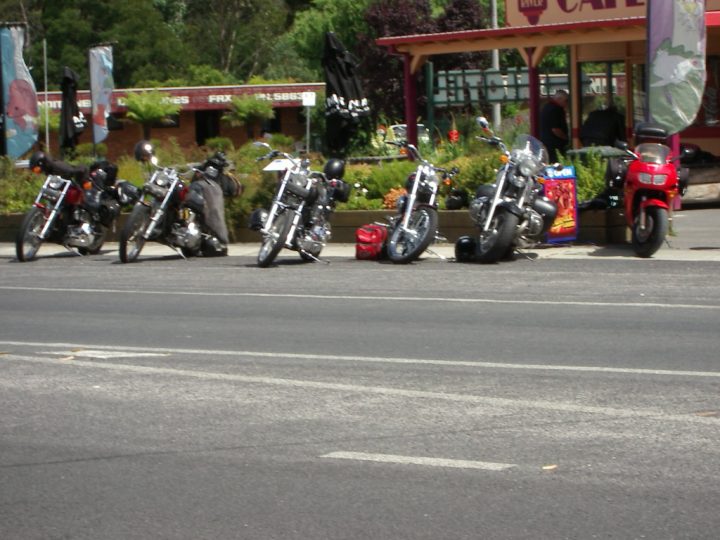 Hilary also found love again, a wonderful and caring woman named Diane who provided him with the companionship and love that he had bee missing for so long. Their wedding, in a park in the middle of Queanbeayn, was a joyous affair and, though he didn’t know it at the time, Hilary was to come to rely heavily on his new wife.

A few years later Hilary was on his way home when he was smashed up in an accident. An unregistered car, an unlicensed driver and a cocktail of drugs against a relatively unprotected rider was always going to end badly. Hilary spent many months in hospital recovering from shocking injuries and even longer after being discharged doing rehabilitation and other activities. Looking back on it is is fair to say that he never fully recovered, either physically or mentally. Once mobile again he sold up the house and he and Diane moved down to the block of land that he had owned for many years in the hinterland behind Eden on the south coast of NSW. There Hilary attempted to do what he had always wanted to do, live the hippie dream of peace, brotherhood and country charm.

But it didn’t really work out. The block was rough and unimproved and living accommodation, while possibly charming and bucolic for a young man, was challenging and difficult for a man in his 60’s recovering from a major accident. Hilary struggled to complete necessary tasks and it wasn’t a surprise to me to hear that they had moved back to Canberra “until he gets better” And it was while he was living back in Canberra that I received the call that he had been disgnosed with cancer.

Like the true champion that he was, Hilary fought hard and, with Diane by his side, attempted to live a normal life. All seemed to be on the up and up for a while, but it obviously wasn’t and last night, 16th January, Hilary’s long fight against the killer within came to an end.

Hilary Morton touched the lives of everyone he met; nobody left his presence without an encouraging word and, if you shared his Christian faith, a word of prayer. I can’t believe I’m typing this; it all seems so unfair.

Farewell, my good friend. I will treasure the memories and they will be more and more precious as the years go by.

My apologies if this post is rather personal and introspective but I am reminded of a saying that I coined many years ago which bears repeating in this context. Each of us have the responsibility to live our lives so that nobody will have to lie about us at our funeral. Rest assured there will be no lies told when Hilary Morton’s body is laid to rest.