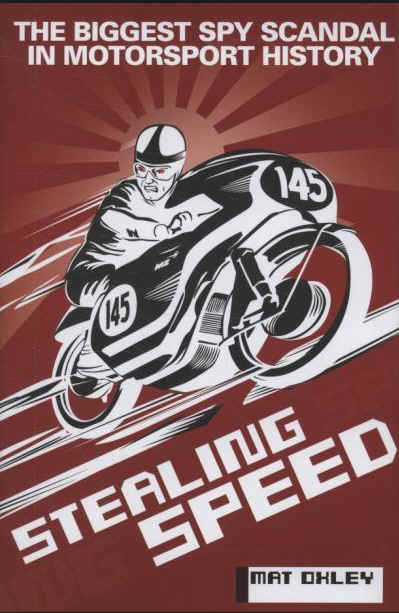 Now that the day of the racing two stroke is well and truly gone it seems a little arcane that a book about its history should attract my attention but, as usual, there is a little more to it than that. The fact is that, for nearly 40 years, Grand Prix racing was dominated by two stroke engined motorcycles. It began in the early 60’s and lasted till the early Naughties and the era saw the most ferocious explosion of racing technology that the post-war era has seen.

In his book, “Stealing Speed”. veteran British journalist and commentator, Mat Oxley, details one of the most intriguing and outrageous chapters of that technology race that was fought out primarily between the major Japanese manufacturers. However, there are no hard-to-pronounce Japanese names sprinkled throughout the book, just European ones. You see the flag-bearer for two strokes in the post-war period didn’t come from Japan at all, it came from East Germany, yep, the Communist side of the border. Here, funded partially by “state” money, the little MZ factory worked hard at producing small capacity two stroke bikes that could take it to the existing giants in the smaller capacity classes, Ducati, Mondial and a heap of other small European manufacturers. And the roots of their technology went right back into the worst parts of WWII and the Nazi’s rocket research. because, you see, the man who first started successfully experimenting with expansion chambers (that tricky, fluky and esoteric exhaust design that actually gives the two stroke its edge) was a man called Walter Kaaden and he was a big wig in Hitler’s V1 and V2 rocket programmes. has the penny dropped yet?

Of course, the V1 was powered by a pulse jet engine and the same principles that applied to making that engine work were later taken into the two stroke engine arena when Kaaden realised that harnessing the pulse of the wave of air that was exhausted from the engine and putting it to use was what enabled the two stroke engine to produce far more power than it was supposed to. Kaaden’s discoveries made the little MZ a very potent weapon altogether and the team’s star rider, a man called Ernst Degner, put it to good effect, winning races and setting lap records.

However, all was not well with Degner who, seeing the money and prosperity (relatively) that riders from the West exhibited when he raced against them made him realise that the Communist “utopia” was nothing like he had been led to believe it was. And so he devised a plan whereby he could use an occasion when he was out of the country racing (and safer from the ever-present Stasi goons who accompanied the team wherever they went, to defect to the West.

So unfolds a spy story that can rival the best that fiction can conjure, made all the more thrilling because it is true. I won’t spoil the ending by telling you what happens, you’ll have to look online for the summary, or, better yet, read the book. I promise you, you’ll love it.