You are here: Home / Book Review: “The Aussies and 2 NZ blokes” by Don Cox

I love this book because, unlike a similar book written more recently by a TV personality who we all know, this one is well-researched and is written by an author whose credentials are first class and beyond reproach.

This book was published in 1997 by Bantam books and, like any book that sets out to record a history that is still happening, it’s a bit “dated” in places, but that doesn’t detract from its worth. 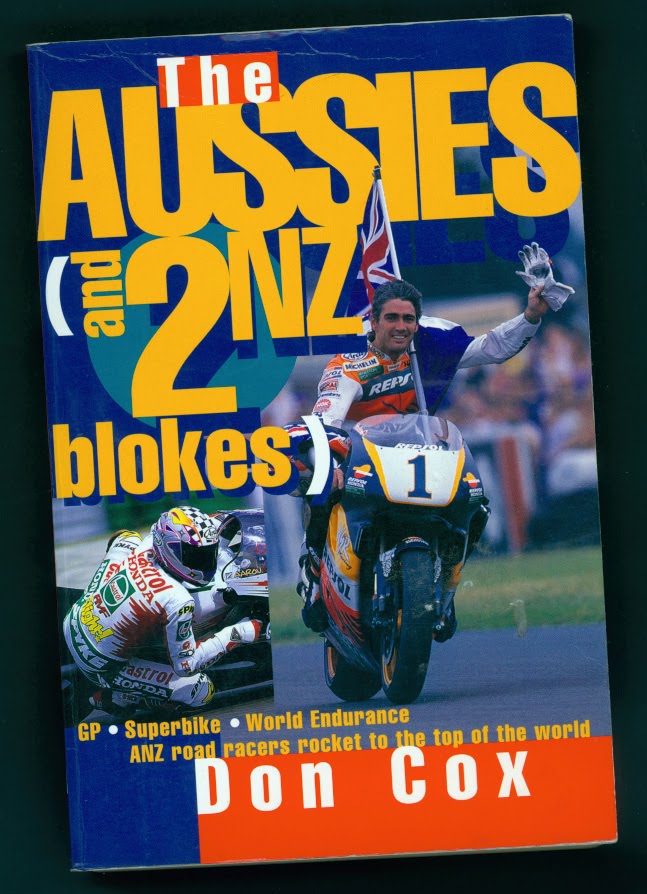 Don Cox is still regarded as Australia’s premier motorcycling journalist. Sadly, Don has recently been diagnosed with MS so it is to be hoped that he is working furiously to get down on paper the rest of the amazing knowledge that he possesses about motorcycle racing in Australia.

In the first section of his book given over to Grand Prix racing, Don looks at the early forays by Australians (and Kiwis) into overseas racing and acknowledges the Pathfinders, as he calls them, Kel Campbell, Kev Kavanaugh, Tom Phillis, Barry Smith, Gregg Hansford and the rest (I might add that the later book to which I have already alluded seems to conveniently ignore anything that happened before Wayne Gardner and treat it as if it never happened)

In the Technical and Management section he deals with Jeremy Burgess, Kel Carruthers, Warren Willing, Mike Sinclair and also looks at the anatomy of a Grand Prix machine.

What is so important and the fact that gives this book its “cred” is that Cox was personally acquainted with all of these people and was able to draw on their own recollections while compiling the book.

I thoroughly recommend this book. If you haven’t read it, you should, because it will tell you where we’ve been, how we got there and where we’re headed.