You are here: Home / My Motobiography / Chapter 24 – The joys of CBX 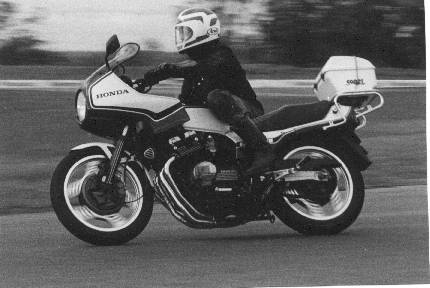 I kept the 500 until 1983 when the sale of our house meant that we were able to get a better car and a newer bike. This time I was determined that I would stick with the middle-weights after having such a brilliant run from the 500/4. I read voraciously all the literature and comparison tests, finally deciding that it was a choice between the two 550 sports bikes, the Honda CBX550 and the GPz550 Kawasaki. And really that wasn’t a choice at all, because even though the testers generally preferred the Kawa to the Honda, my allegiance had pretty much always been to the Hondas and besides, the CBX was just so “trick” compared to the no-nonsense Kawasaki. Plus, the “bunch of bananas” exhaust system reminded me so much of the exhaust headers on the old 400/4!

Time to hit the classifieds.

I finally found a low mileage 550F2 example (the one that I particularly wanted) at the late Len Willing’s Wyong bike shop on the Central Coast of New South Wales. Apart from an exhaust system that threatened to fall off in my hands, the bike was exactly what I was looking for. I replaced the standard exhaust almost immediately (the bike had 21000kms on the clock) with an O’Brien 4-into-1, had the carbs tuned to match it and so began 5 years of exhilarating motorcycling.

The 550F2 model was identical mechanically to the “F” model but it had a frame-mounted fairing, very similar to the 900F2b fairing and, to my mind at least, it set the bike off beautifully as well as obviating the need for me to fit a fairing. In terms of sales, the F2 model outsold the unfaired model by a considerable margin.

I used the bike for everything. I commuted, did the shopping, rode once a week to Newcastle and back (200 mile round trip) and did my first really serious touring. With my set of canvas “throw-over” panniers and the token plastic top box, I was hooked on covering long distances. Despite the bike’s sporting pretensions, I found it to be an excellent tourer. In mid 1984 I did a two week tour of New South Wales and Victoria, riding on my own for the whole time, and the bike ate the whole thing without the slightest complaint. I found that Belstaff riding gear didn’t REALLY keep you dry and that a sheepskin seat cover was a good idea.

Three years of riding around south east Queensland where we had moved to live followed and again the bike performed faultlessly. During this time only routine maintenance was carried out with only a few major items needing attention (fork seals, steering head bearings and rear swing arm bushings.)

Early 1988 saw us back in Canberra again and the purchase of another house, so the bike was reluctantly sold to help raise a deposit. I had always looked on the sale of my bikes as an adventure, knowing that something else was waiting around the corner, but the sale of the CBX was different. I felt like I was saying goodbye to an old faithful friend. At the time of sale, the bike had nearly 90000 kms on it.

By the way, you can read all about the CBX550 here.