You are here: Home / Pass it on

In all forms of motorsports it is common to see sons following their fathers into the sport. Mario Andretti is seriously considering a brief sortie into the Indy 500 next month. His son, Michael, runs his own racing team now after a successful career, and Mario’s grandson, Marco, is now making a name for himself. The Earnhardt’s, the Petty’s, the Waltrips, are all generational families within the NASCAR community, to say nothing of the Unsers in open-wheel racing in the USA. Tomas Scheckter, son of 1979 World F1 Champion, Jody, also races in the Izod series.

In Australia we see a similar situation of the apple not falling very far from the tree. Steven Johnson is doing a good job following in the footsteps of his famous dad. Glenn Seton followed his 1965 Barthurst-winning father into the sport, and there are other examples within the V8 Supercar fraternity.

In speedway, the situation is even more marked. Three of Steve Brazier’s sons followed their dad into Sprintcar racing, one of them, Gary, has now won 5 Australian Titles to go with the 2 his dad won back in the 70’s. Gary Rush’s son also had a distinguished career in sprinters.

And in motorcycle racing we see the same thing happening. I correspond with two guys who race Post-classic racing nowadays and I have photos of their dad racing a TZ back in the 70’s.

At the MotoGp meeting at PI last year a young kid by the name of Remy Gardner won the 70cc race in the MRRDA series in front of an international crowd who had once seen hs dad win two Australian Grands Prix on the same circuit and after whom the main straight at PI is named. Now comes news that, as well as competing in the MRRDA series again this year, Remy is off to Spain to compete in the Spanish CMV championship. As we all know, the Spanish junior leagues are the prime development grounds these days for riders who wish to pursue a Grand prix career, so this could be an important step in young Remy’s career. 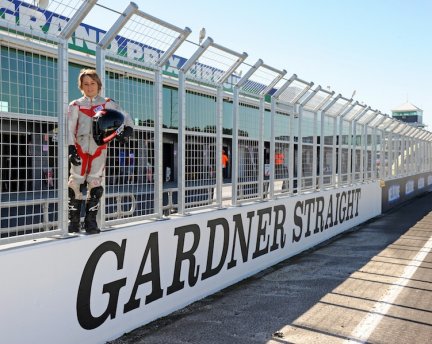 In other news, of a sadder nature, the coroner investigating the deaths of two motorcyclists in the Adelaide Hills last year has determined that former champion rider, Greg Pretty was responsible for the accident. Apparently Greg’s bike veered to the wrong side of the road on a corner and collided with a bike coming in the opposite direction. As a result, both riders died. It’s always sad to report such news but it does remind us, (I hope) that one of us are immune from mistakes, even the best riders can sometimes commit errors of judgement. RIP both riders. Ride safely, folks.