You are here: Home / Community policing at its best 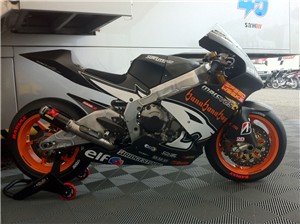 The Marc-VDS MotoGp bike, powered by BMW. (See article below)

This video was posted on my Facebook site this morning. It shows a policeman doing point duty in the middle of Douglas, the capital of the Isle of Man. If more police had this attitude to policing, I think we’d all be a lot happier.

And one of my good friends posted this “Lay-off letter” one one of my favourite forums this morning. Definitely worth reposting.

As the CEO of this organization, I have resigned myself to the fact that Julia Gillard is our Prime Minister and that our taxes and government fees will increase in a BIG way because of their spending spree and proposed Carbon Dioxide tax.

To compensate for these increases, our prices would have to increase by about 10%. But since we cannot increase our prices right now due to the dismal state of the economy, we will have to lay off sixty of our employees instead. This has really been bothering me since I believe we are family here and I didn’t know how to choose who would have to go.

So, this is what I did. I walked through our parking lots and found sixty Rudd and Gillard bumper stickers on our employees’ cars and have decided these folks will be the ones to let go. I can’t think of a more fair way to approach this problem. They voted for change…..so I gave it to them.

I will see the rest of you at the annual company picnic.”

On the racing scene, Ten Kate’s Johnny Rae will miss this weekend’s Aragon round of the WSBK as he has had to have surgery to his right radius and left clavicle following his practice crash at Misano last weekend. He won’t be replaced for this round.

And the Dani Pedrosa saga just won’t go away, an Italian newspaper publishing pictures yesterday of Pedrobot, minus sling, attending and apparently taking part in a ten pin bowling competition just days after his right collarbone was plated. This, they say, gives credence to the rumour that he re-injured the arm/shoulder in a supermotard training accident some days later. This is one for which I don’t think we’ll ever get and answer.

Yesterday my copy of “Stealing Speed.” by Mat Oxley, arrived from amazon.com. What a cracking read it is, giving some wonderful insights into how Ernst Degner defected from East Germany along with his family in 1961 and how he took Walter Kaaden’s 2 stroke tuning secrets with him to the west and, specifically to Suzuki. The book also details just what sort of life racers in the day live and how tragically short many of their lives were. The book cost me 20 bucks, and, at the moment, amazon is shipping free so now might be a time to buy. Thoroughly recommended.

And, FINALLY, the FIM has announced the successful tenderers for positions in MotoGp next year.

“The new teams are mainly a formation of the top Moto2 teams stepping up to join the premier class, they are as follows:

Of the new teams announced it is certain that Marc VDS will be running a Suter chassis equipped with the engine from a BMW S1000RR. Kiefer, who currently lead the Moto2 series with Stefan Bradl, will likely step up and continue their relationship with the German chassis builder Kalex.

In relation to the number of riders per team, a statement reads: “In each case the offer is with respect to one rider only and is subject to the submission of their final plans.”

Applications from new manufacturers wishing to participlate in MotoGP from next year continue to be evaluated, which includes Norton plans to enter MotoGp as their application is still under consideration.”

Suzuki are teasing thew O/S media with the release of the new V-Strom, but “teaser” pics from the US seem to show that it’s basically unchanged so I don;t know what all the fuss is about. Official release date has now been shifted from today to the 22nd June.