You are here: Home / News and Updates / A little bit more about crashes..

You can go for months without having a drama and then they seem to come along all together.

A while ago, on the way home from school, I had 3 separate incidents of drivers merging into my lane while I was using it. That hadn’t happened for ages. Fortunately, on each occasion, I was riding at the appropriate speed and had scoped out a potential escape route so no harm done.

In a separate incident I was pulling out of a driveway to turn right into the street when I saw an Australia Post van approaching. He slowed down and flashed his lights at me with the obvious meaning that he was intending on pulling into the driveway I was leaving and that it would be OK for me to pull out onto the road. Again, because I’m a suspicious cuss, I hesitated and was rewarded for my caution by seeing a car flying past the slowing van on the wrong side of the road. Had I pulled out when he signalled me, I would have been cleaned up by the car that was lurking in behind him, unsighted.

Now, allow me to climb onto the soap box for a minute. I am wearying of the continual raging against the “cagers” that is now part and parcel of motorcycle forums, magazines and conversations. The fact is, that, in the majority of cases where a motorcycle and a car are involved in an accident, it is the motorcyclist who is at fault. And, even in many of the situations where the motorist was at fault, the motorcyclist, through inattention, speed and lack of skill, contributes to the severity of the accident.

Consider this. The classic “U” Turn accident (and the similar “pulling out into my lane” accident) How many times have you heard of these accidents reported in these terms..”I was riding along and this cager did a U turn in front of me and I had nowhere to go so I hit him and went over the car onto the road.”

A familiar scenario, yes? Of course. But the subtext here that the rider does not wish you to know is that, at the time of the accident, the posted speed limit was 60km/h and the rider was doing 110km/h. Now it isn’t rocket science to grasp that, had the rider been doing the speed limit, he would have 1. Seen the car doing the U turn much earlier. 2. Had time to slow down and not hit the car. 3. Had time and space to put an escape plan into effect. I believe that the law calls this “contributory negligence”.

Yes, of course there ARE accidents where the motorcyclist is the entirely innocent party, but there is also a lot of “cage rage” out there that is entirely unjustified and is a smokescreen to try and obscure the motorcyclist’s tangible contribution to the accident and its severity.

*gets down off soap box*

On another subject entirely, Helena *fingers crossed* goes into hopsital to have her troublesome thyroid removed. This will be our third attempt to get this done so you can understand that we are more than a little anxious that this will be the one.

And, on the subject of speed, since Ralph Hudson’s 1000cc Suzuki is still on its way home from Bolivia, Ralph took his “little” bike, the 600cc Suzuki, to Bonneville last week. He didn’t get the record as the bike had mechanical issues on the return run but he does go away from the flats with the satisfaction of having the fastest “sit on” 600cc motorcycle in the measured mile 294mph (398.4km/h)

Also on the subject of speed, Team Mojo Yamaha (Dave and Lorraine Crussell and crew) are on the Isle of Man for the next fortnight competing at the Manx TT. I wish them all the best, the fun, the speed and, most of all, the safety as they tackle the mountain course. 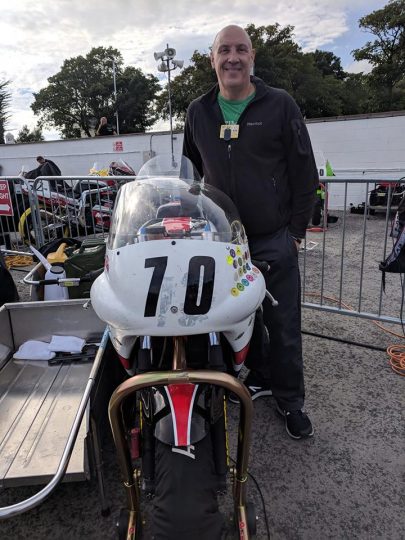