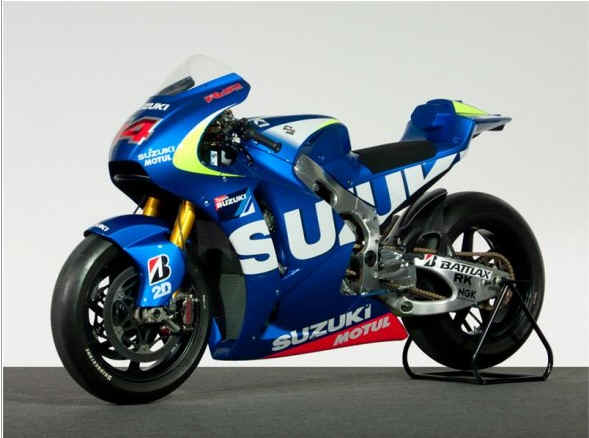 At the Test Day at Catalunya yesterday, Suzuki announced that they will be returning to MotoGp. That much is no surprise; it has been an open secret for months. What was a shock was the timing of the return with Suzuki confirming that it won’t be coming back till 2015, not next year as many expected. Here is the text of the official press release.

“The outline of testing team and racing machine to be developed are as follows:

Unfortunately, Suzuki’s timing is as a result of DORNA’s previously announced decision not to provide any financial support for any new teams joining the circus in 2014. Bridgestone, likewise, have announced that no free tyres will be supplied to any new team joining in 2014. I don’t know about you, but Id have thought that, with dwindling grids, the chaos that is CRT and decreasing TV revenue, it would be in DORNA’s best interests to get another factory team back on the grid as soon as possible.

Anyway, Randy de Puniet tested the bike at the test day yesterday and surprised many by setting the 8th fastest time of the day (the Honda team didn’t test), only 8/10 of a second slower than Jorge Lorenzo’s best time for the day, very competitive.

So we have to endure a whole year and a half of controlled leaks from Suzuki about how the bike is going!

Still on MotoGp, last weekend’s Catalan GP was a cracker of a race if you leave Jorge Lorenzo out of the equation. Much as I appreciate his flawless riding, the fact is that he is as boring as when just clicks off the laps the way that he does. He can’t do anything else, of course, it’s not his fault, but it’s a good thing that there was a battle for 2nd otherwise the race would have been completely forgettable. 🙂