You are here: Home / News and Updates / A re-post, sorry. 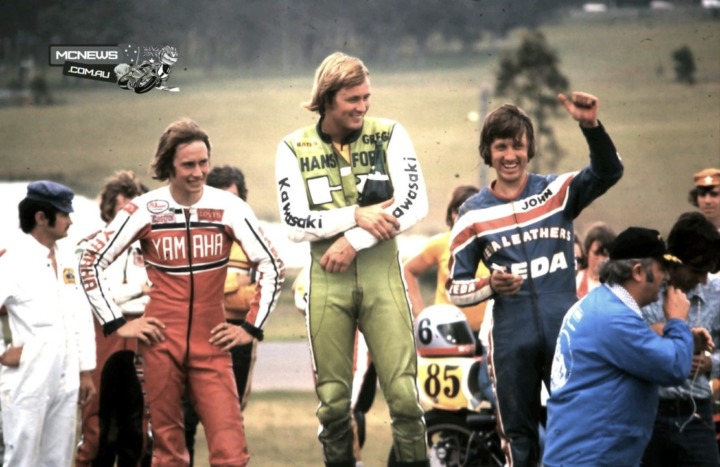 In much the same way as John Small’s iconic picture of Croz wheelstanding John Fitzgerald’s Z1R at Macarthur Park, this photo of mine from Oran Park 1976, gets regularly posted and for pretty much the same reason.

The consensus amongst those who were around at the time is that this race was one of the best-ever and I want to recall it in detail below to show why I believe this is so. Yes, this was posted on one of my blog pages more than 10 years ago, but I believe it deserves another airing, please indulge me.

It was Round 2 of a 3 round road racing series sponsored by Rothmans (doesn’t it sound funny to talk about cigarette sponsorship these days?) The Pro Series had been going for a number of years and attracted huge crowds to Sydney’s Oran Park Raceway to witness Australia’s best battle it out on the tight 1.96km south (or short) circuit. I feel privileged to have been there that day.

The main players were Australia’s two top F750 aces; Sydney’s Warren Willing, (later to soar to fame as a race engineer working with a number of 500cc and MotoGp teams) and Brisbane’s blond-haired glamour boy, the late and lamented Gregg Hansford. The rivalry between these two riders was as intense as any could be. The NSW rider vs the Queenslander, it was State of Origin before it had even been thought of. Yamaha vs Kawasaki, part-time racer vs professional. Going all the way back to their epic duel at Bathurst in 1974, people knew that, when it was Willing vs Hansford, the sparks were sure to fly. Willing was riding the Adams and Sons sponsored OW29 Yamaha, an ex-Agostini machine with local fettling. Hansford was riding the then-new KR750 water-cooled triple, having given it is debut win in stunning style at Laverton just a few months before. While TKA used both this bike and the older H2R air-cooled bikes during that season, I’m certain that Hansford was on the later machine this day.

But there was a wild card. Sponsored by the Top Spot Restaurant in Picton, New Zealand, the laconic, shy and quietly spoken John Woodley had amazed everyone with his pace at Laverton also before retiring with a seized engine on the then-new “customer” RG500 Suzuki. Two other Kiwis, Stu Avant and John Boote had also ridden brand new RG’s that day and had had seizures also. But Woodley’s bike had arrived back from a meeting in Malaysia that weekend and some smart money was on the Kiwi despite being down on capacity by 250cc to the big guns.

Heat races were held earlier on the Sunday and the final was due late in the afternoon. Both Hansford and Willing duly won their respective heats, the organisers carefully arranging the programme so that the two stars didn’t meet before the final.

At the drop of the national flag for the 25 lap final, Willing got a bolter and established a good lead as both Hansford and Woodley got trapped behind a slower rider. I’m sure that many felt that the race was already over. But they would have reckoned without the determination of the chasers. Once clear of traffic, they hauled Willing in and so began 20 laps of the most absorbing racing you could ever have seen. Time after time the lead positions changed, Hansford and Willing leading at various points and even Woodley snatching a breath at the front of the pack. As expected, Woodley’s RG was hosed on the straights but he was electric in the twisties and harassed both Willing and Hansford constantly. For the first part of this race I spectated and took photographs from the outside of BP corner, then moved to the top of the “flip-flop” for the final part. One of my photos from BP shows Willing leading with Hansford and Woodley so closely tucked up behind him that it looks like 3 riders are riding one bike.

With a handful of laps to go, Woodley got badly baulked and fell off the leading pair. Now it was a battle in 2, just what the crowd had come to see. Willing, on the better-sorted Yamaha, still led and looked a winner, but Hansford would have nothing of it. With just over a lap to go, they both arrived at BP corner to be confronted with a lapped rider. Willing could see that there was no gap on the pole line so he took the lapped bike wide, scooting out towards the wall and applying the power gently to avoid high-siding (an ever-present possibility with those vicious two-stroke beasts). Hansford, however, conjured up a pass on the INSIDE line where no pass was possible. With no space to get through, he powered down the inside, his knee dragging on the grass on the infield and smoke pouring off the back tyre. A bike should, by rights, not fit through the gap he aimed at, and a crash seemed inevitable. But somehow not only did the bikes NOT touch, but Hansford maintained control and erupted out of the corner with the lead!

Reporting the race at the time, REVS, the national motorcycling newspaper, reported that Hansford crossed the line a few seconds later to take the win. But, in fact, he didn’t. So intense had been the battle and so engrossed had we all been in it, that few realised until after the race was over, that the riders did one more complete lap before crossing the line and receiving the chequer. Willing finished a close 2nd and Woodley a deserved 3rd. In fact it wasn’t until a week later when REVS came out that a reader’s letter pointed out the error and the report was corrected.

My photo of the presentation ceremony which was staged in front of the grandstand at BP corner is reproduced above. It shows the three riders, totally spent and almost in a daze as they received the rewards for their work that day. The look on Woodley’s face is priceless; it’s almost as if you can see him thinking, “Damn, did we really DO that?”

Warren, of course, had his racing career  (and almost his life) tragically cut short in that shocking accident in August 1979 at the North West 200 in Ireland. John Woodley retired and is, as far as I know, running a bike shop at home in Un Zud. And the great Gregg Hansford, the man who proved that day that he was magic on two wheels, tragically lost his life in a CAR accident at Phillip Island many years after this, his most famous victory and surely his greatest on Australian soil.

The greatest race I have ever seen? Yes, without a doubt.”

Since posting this story we have also lost the great Warren Willing to cancer and John has stopped riding after a serious track day accident on his MV Agusta (or so I have been told). John has lived in central Victoria for many years and has been working in the forestry industry, planting hundreds of thousands of trees around his rural property. I still see him from time to time at race meetings and he hasn’t changed a bit. I hope you enjoyed my recollection of this auspicious day in Australian motorcycle racing.