You are here: Home / News and Updates / The great spacer caper of 1974 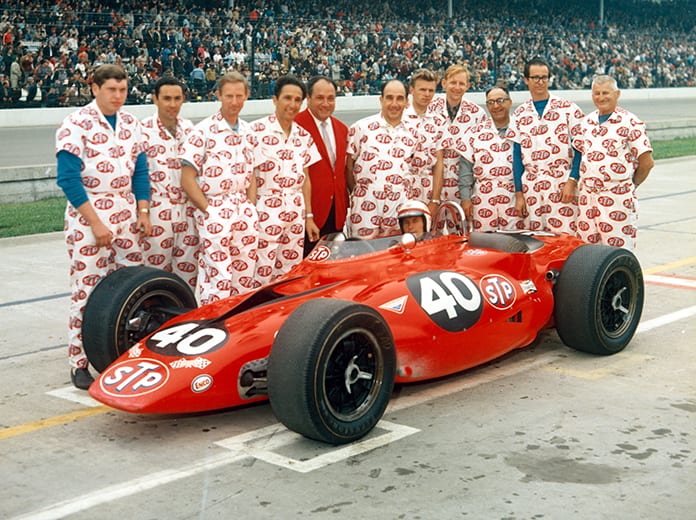 History is littered with enterprises of huge import that were brought to nothing by trivial means. I well remember sitting up all night in May 1967 watching the live broadcast of the Indianapolis 500. Mario Andretti was driving the STP turbine car, (pictured above) and looked like pulling off a stunning victory over the conventionally engined cars when, 3 and a half laps from the end, the car slowed to a stop, out of the race. The cause? a $2 bearing in the transmission.

I could multiply examples but I’m sure there’s no need. Today, I’d like to look at another example, though, this time from the world of motorcycle racing and this one much closer to home.

In 1974 the 5th Castrol Six Hour production bike race was held at Sydney’s Amaroo Park Raceway. By then it had become a most prestigious event and the manufacturers and distributors were already looking at it as a valuable advertising coup to be able to say that their bike had won the famous race. The 1973 race had been won by the legendary Kenny Blake, riding the whole six hours solo on a Kawasaki Z1. As the race grew, more riders and teams were placing their faith in Kawasaki’s bulletproof 900cc machine.

But they weren’t alone. Amongst the other teams to buck the system were the BMWs, fettled by the already-famous Don Wilson. For the 1974 race there were three of the BMW R90/6 bikes entered, One  from the Tom Byrne stable, to be ridden by Bryan Hindle and Clive Knight. The second Beemer was entered by South Sydney Auto Spares and was to be ridden by Gary Thomas and Graham Kairl (who, incidentally, lives just down the road from me these days) and the third was entered by Donny Pask, to be ridden by Dave Burgess and Joe Eastmure.

The BMWs were nearly as fast as the Kawasakis and had the benefit of a bigger fuel tank that, with careful riding, might enable them to take one less fuel stop. But it was the “careful riding” that was to be the issue. You see, those horizontally-opposed cylinders stuck out in the breeze and severely limited the bike’s cornering clearance compared to the across-the-frame Japanese bikes. Riders had to take great care to ensure that the cylinder heads did not bang on the road in the corners otherwise they would wear through, promote oil leaks, and ensure that an unscheduled pit stop would be the consequence.

This picture from the race showing Hindle leading Thomas illustrates the problem. Gregg Hansord and Warren Willing were leading easily on the two stroke Kawasaki 750 when it sputtered to a stop on the back straight, someone had left the fuel tap on “Reserve” and the plan to do one more lap THEN switch to “Reserve” went out the window. Hansford hopped off and quickly pushed the bike back to the pits where it was refuelled ready to go out. Except that it didn’t. Scrutineers, having examined the rear tyre, declared that it was too badly worn and that the bike could not resume the race unless it was replaced.

Much anger and colourful language ensued but the scrutineers enforced their ruling by taking the bike key so that it could not be restarted. Willing walked away in disgust and the bike was parked.

This left the Hindle/Knight BMW with a comfortable lead and the two very experienced riders clocked back the pace a little and circulated to take a popular victory.

Except that it wasn’t. Post-race scrutineering (remember that this race was for strictly stock standard bikes) revealed that the winning bike had a spacer in each front fork that had the effect of raising the bike’s front end and increasing its cornering clearance. The bike was to be disqualified. Don Wilson protested and even showed the scrutineers the parts book for the 90/6 that clearly showed that the spacer was a factory part for that model, a locating sleeve to stop the fork springs from rattling. Almost convinced, the scrutineers reexamined the front forks and found that, while the sleeves WERE there as the book said, they were placed upside down to what the book said they should be. It was clear that inverting the sleeves WOULD make them act as spacers, compressing the fork springs and increasing the ground clearance and the bike WAS disqualified.

Several other fancied runners were also disqualified for other offences as the organisers struggled to ensure that the “production” credentials of the race were maintained.

Hindle, a deeply religious man, was devastated that his character had been impugned and announced his immediate retirement from motorcycle racing and thus deprived a whole generation of young fans the opportunity to see his peerless style. Later he was to tragically die in an ultralight airplane accident. The man who had beaten Ago at Oran Park is still mourned to this day.

The race was eventually declared in favour of the 2nd place finisher, Kenny Blake and Len Atlee on a Kawasaki. Kawasakis finished 1-2-3 but were they happy? Hell, no, they weren’t. Remember that the adage “Win on Sunday – Sell on Monday” was literally true,the Kawasaki executives were furious that the BMW had been declared the winner and was only later disqualified depriving the Kawasaki boy the opportunity of basking in the glory of the win on Sunday afternoon in front of a bumper crowd and a huge TV audience.

They were to be pacified somewhat with wins in 1975 and 1976 and BMW were to have their day in the sun with Blake and Eastmure’s slashing win in 1977.

The subject is still discussed and, as late as yesterday, Don Wilson’s son was quoted on social media as saying that “dad put in TWO spacers” That muddies the waters somewhat and I am a little skeptical. I think had he done so, additional penalties over and above the DQ would have been levied as was done with other teams who had been found in contravention of the rules.

In any event, the Spacer Caper of 74 will live on in Australia’s motorcycle racing history as an example of where a team gambled on a $2 part and came up short.