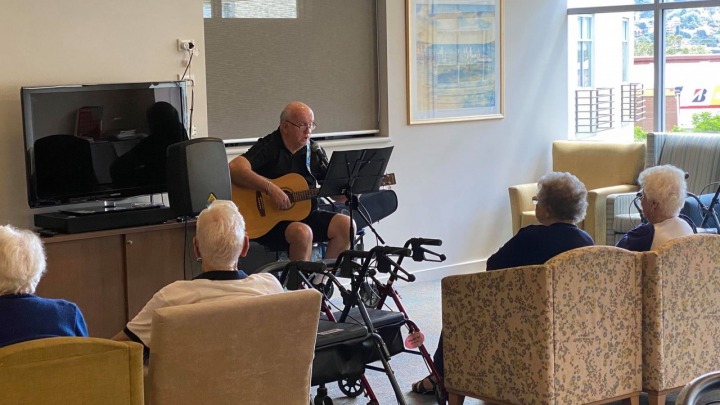 Opportunities for nursing home concerts in the last two years have been few and far between. COVID has hit the industry particularly hard with the older and more fragile residents of these facilities being most vulnerable. The only answer has been to lock the homes down and only allow access to staff and visiting medical personnel.

Then, just as it looked like things were picking up earlier this year, the “second wave” arrived and we were back to the homes being locked down and US being locked down as well, subject to strict restrictions ourselves. I checked my books the other day and the last concert I did was in May 2021, more than 6 months ago.

As well as doing the group concerts which I have been doing since, like forever (at least it seems so), I also do some solo concerts at other venues but nothing has been happening there also. A month or so ago I rang around the homes just checking on the state of play and there seemed to be no prospect of getting back in to do some music any time soon. Indeed, one of the homes had 25+ cases of COVID including some staff so they were really struggling. I felt bad about asking! I told the lady I really felt for them and told her I wouldn’t bug them until things picked up.

Imagine my surprise, then, when I received a call from the same lady at one of the IRT homes (Illawarra Retirement Trust) asking me if I could do a birthday concert this week. It is, apparently, IRT’s 52nd birthday and they always celebrate it. I agreed but then had a sharply-indrawn breath when she told me the exact details of what was required.

It wasn’t just one concert, it was FOUR, one in each of the separate locations within the complex. Well, that wasn’t SO bad, I thought, I could just do the same set of songs four times. But then she said that it would be an hour concert in each location. FOUR hours of playing and singing. Gulp.

You see, there are all sorts of problems associated with this. Firstly, I haven’t sung since May so my voice was bound to be pretty weak and liable to get pretty scratchy pretty quickly. Secondly, I hadn’t PLAYED since May and the tips of my fingers were very soft. For those who don’t play, you should know that small calluses form on the finger tips of your left hand if you play regularly and they help you to be able to play for longer periods of time without experiencing discomfort. Players also help themselves out by rubbing methylated spirits into the finger tips and accelerating the callusing process. I had almost no time to do this before having to play, so it was a bit worrying.

Thirdly, the lady advised me that, since they were only just opening up after the COVID outbreak, they were having to implement some pretty strict controls on all visitors. Not only would I need to check in with the Service NSW app but I would also have to have an on-the-spot COVID test and wait 15 minutes while the results were processed. I would then be required to wear an approved mask (supplied by them and of a better quality than the normal one) AND a face shield (also supplied by them) whenever I wasn’t actually performing. I would also need to check in with IRT’s own digital check-in procedure before being able to go and set up.

As the conversation continued I was wishing more and more that I hadn’t agreed to go. But I had to temper this with the knowledge that the residents had also been locked down since the end of June without even their RELATIVES being able to visit them. So, with all these misgivings rushing through my head, I went ahead and confirmed that I’d do the gig.

The COVID test was done outside the front door of the facility and there were no chairs to sit on while you waited for the results; you know how much my leg loves having me standing for extended periods of time, don’t you?

Once inside, I checked in again and was directed to my first venue. I had already realised that, since I would be effectively doing 4 separate shows, I would need to set up, perform, pack up all my gear, shift to the next location and go through the same process again. The “deep end” was getting deeper.

It didn’t take long for the voice to start getting scratchy and for the blood to start gushing out of my fingers (not really, but they sure got red and sore). Still, the residents sure seemed to appreciate it and I guess that, after having had no outside contact for nearly 6 months, they’d have liked it no matter how amateurish it was.

The thing that DID surprise me was that, despite not having played or sung for that period of time, I fell back into the songs amazingly easily. I had expected that I’d be making all sorts of mistakes and stumbling around a bit but it didn’t happen. I don’t know if there is such a thing as muscle memory for singers but it sure seemed like it was at work yesterday.

My first concert was at 0930 and my last one was at 1500 with a break for lunch in the middle. Rather than having to run the gauntlet of having to check out and then back in again, I took a packed lunch and a thermos of coffee and stayed indoors.

By the time I packed up and got out of there it was just before 1600 and I was bushed. It usually takes me about 20-25 minutes to get home from there but there was a truck accident on the freeway that had the traffic banked back for miles and then my cunning plan of cutting out and sneaking around the backroads came crashing down when I encountered roadworks on the old highway that delayed me yet again.

I pulled into my driveway at 1705, exhausted but glad to be home. I have four more concerts to do, Christmas ones, at the same venue, in December. Fortunately they are the same programme on separate days spread over two weeks so that shouldn’t be as hectic.

Talk about diving in at the deep end. Nearly 80 songs in a day. Someone asked me the other day am I bored now that I am retired? Um, not a chance.