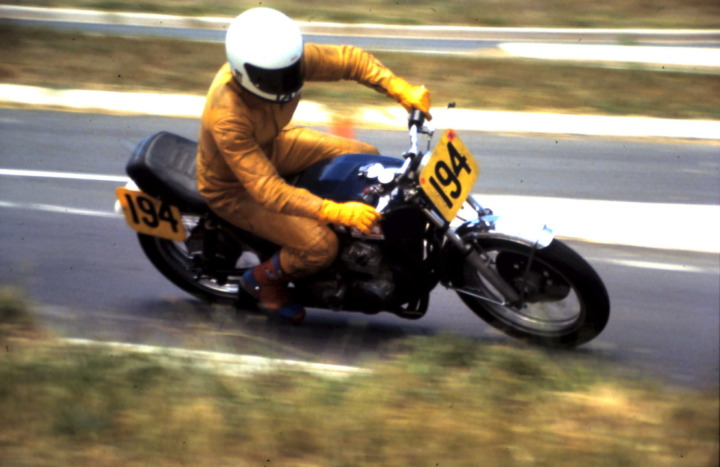 My more knowledgeable readers will not only recognise the bike and its rider but also the location in which this photo was taken. It is, of course, the Masaaki Engineering Honda 400/4 (closer to 500cc by the time Mac had finished working on it). The riders is Mac’s “house” pilot, Greg Taylor and the location is the Coyne Street intersection of the Macarthur Park street circuit in Canberra.

The giant-killing bike was the nemesis of the Improved Production ranks in the late 70’s – early 80’s. On the shorter tracks it was nearly as fast as the 1000’s and Greg rode it like a demon.

Here’s another shot of the combo from Oran Park, a little earlier than the top one. 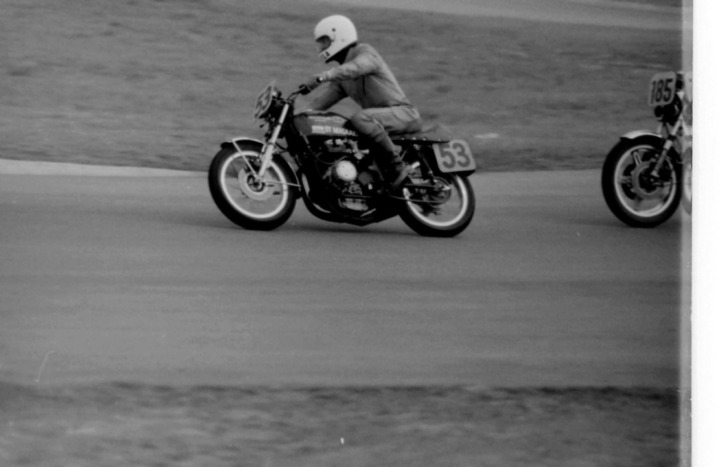 It’s amazing that, whenever the bike is mentioned, there will be people who remember it. “Mac” Masaaki was a very gifted engineer and knew well how to get reliable horsepower out of Japanese engines. He also did a lot of work on “big” engines and I seem to recall that one of the Blanco brothers took advantage of his expertise. Dean Evans also rode one of Mac’s “big” bikes.

I am grateful to one of my Facebook colleagues who actually knew Mac, for supplying me with a lot more information since I did the draft of this post and I’ll try to put that in order.

Mac WAS a gifted engineer in his own right but his main expertise rested on the contacts that he had back in his homeland at the time. Japanese racing technology hadn’t started making its way to Australia like it did later while the established companies like Mugen, Moriwaki and Yoshimura were well entrenched in Japan. Mac drew heavily on that knowledge base to build his bikes and added his own “tweaks” as well.

The 400/4 was a “silhouette” bike which the authorities knew wasn’t really a “legit” Improved Touring bike. As Alan says, it wouldn’t have passed the “pub” test and certainly wouldn’t have survived a post-race srutineering tear-down should someone have requested it. It ran much more as a straight racing bike than a genuine improved tourer. To quote Alan, “It was wild in all forms of the word much like some of the Syndicate bikes.”

Once he’d stopped playing around with bikes, Mac got into the tourism business. He started a limo service to and from the airport and also started doing half and full day tours around Sydney tourist destinations. He also started investing in property and became quite successful at both ventures, especially renting out his properties to O/S students on both a short and long-term basis.

Sadly, his later story was no so shining and he was involved in two very ugly incidents in Sydney (not bike-related) that saw him spend some time in jail. What a waste.

The details are sordid in the extreme. I don’t intend to publish them here. Should you wish to read them you may do so by following the link below..

The sorry story of Mac Masaaki.

You never really know what people are like, do you?