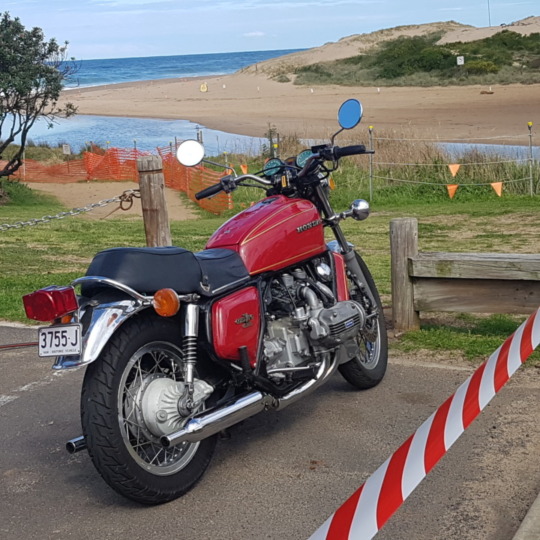 Yesterday I took advantage of the fact that the fierce Westerlies had dropped to get out and have a ride. With three registered bikes in the garage these days it makes for an interesting decision as to which one to take but I decided that I’d take Goldie. Firstly because she hasn’t been ridden for a couple of months and secondly because I wanted to do a longer run and check the new shocks. I’m glad I did.

It was a beautiful day and I headed north for a change. Up the highway to West Wollongong, up Mount Keira Road to the top then across the windy little road to the top of Mount Ousley. From there I followed the highway and then the OLD highway to Helensburgh where I turned east and across to Bald Hill. The hang gliders were out in force and there were heaps of bikes in the car park. As always, Goldie attracted a lot of attention and I chatted for quite a while with a guy around my age who admired her and told me about his project, a 1966 Ford Falcon that had been his father’s car and was now his. Unmolested and unrestored, he was resisting the blandishments of friends who said that he should, at least have it resprayed. I agreed with him that originality is king (are you even a little surprised about that?)

From Bald Hill I headed north into the Royal National Park. After the gale force winds we have been having I was a bit hesitant as the road through the park is often covered with leaf litter and branches after strong winds, but I was delighted to find that it was spotless. Not only that, but it was free of traffic, 4 wheeled or 2. Mind you, it seemed that not everyone had treated the road with the respect it deserves in the last few days.. 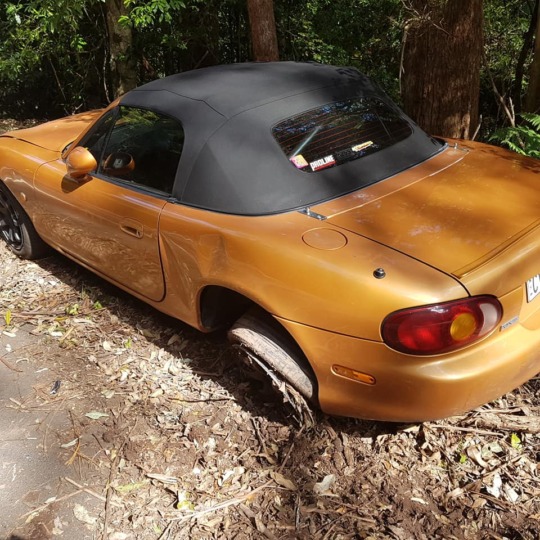 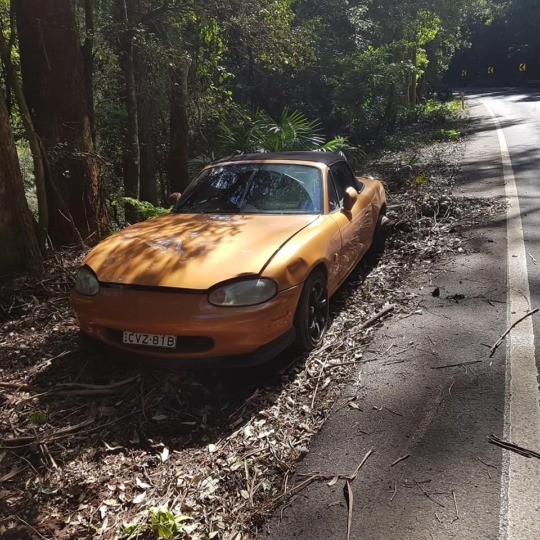 At the Garie Beach turnoff, I did a “U” turn and headed back. The road along the tops is straight and boring and doesn’t get interesting until after the Bundeena turnoff and I wasn’t planning on that long a ride anyway. When I got to Bald Hill, I turned left and headed down the hill to the Coast Road. I paused at Stanwell Park Beach to take a happy snap (above) and remind myself of the strong family connection between us and Lawrence Hargrave who used to fly his box kites off Bald Hill and land pretty much where I was parked.

The ride home through Wollongong’s northern beachside suburbs was pleasant as it always is and I got home a couple of hours after leaving having enjoyed a sparkling time in the saddle. Conclusions? On all manner of surfaces that I encountered, the addition of the new shock absorbers has transformed the ‘Wing into a thoroughly enjoyable bike to ride. Not a bad investment of $135.

Now, a couple of other things. Firstly, the MotoGp events of late have been rivetting but for some scary reasons. I doubt that the Austrian track will get a guernsey next year unless Red Bull spends a bucket of money on safety improvements. It is by good luck rather than good management that some of the accidents did not result in much worse injuries. Yamaha are in a world of hurt at the moment, looking a pale shadow of the once-dominant team that they were. Honda will have to write this season off, it’s clear that Marc won’t be back until later and neither of the incumbents are going to threaten the top ten, let alone the podium. KTM and, especially, Brad Binder, are the surprise packets and have leapfrogged a number of more fancied outfits; who would have thought that a partly trellis-framed bike could beaten the alloy twin-spar hegemony? Dovi has thrown the cat amongst the pigeons but he may just have thrown the baby out with the bath-water (uber mixed metaphors there) if Ducati calls his bluff. It will be a pity if he finishes his career as the best rider to never.. And Suzuki? Well, I have always said, for as long as I can remember, that is the factory ever decides to get REALLY serious about MotoGp and spend the money that has to BE spent in order to get to the pointy end, the others will have to watch out. It seems they have and I can see Mir, who I picked out years ago as a future star, showing his more experienced team-mate the way around. To my mind, Mir is a vastly better rider than Rins can ever be. Jack Miller, a serious contender for the world championship? It seems so, he still needs a little more time and discipline but, if Dovi falters, Jack could pounce.

And, on the subject of talent? Has there ever been a time when the Junior ranks were more filled with it than at present? I am still perplexed as to how Honda let their best prospect for years, Joan Mir, slip though their fingers but it seems that they may have done it again if the rumours of Jorge Martin being signed by Ducati prove to be correct. What are they thinking? Give Cal a golden handshake and draft Martin into LCR, it’s a no-brainer.

The new mirrors for the VFR have finally arrived, 7 weeks t get here from Germany, better late than never, I guess.

Anyway, that’s it for today, catch you soon, thanks for reading.