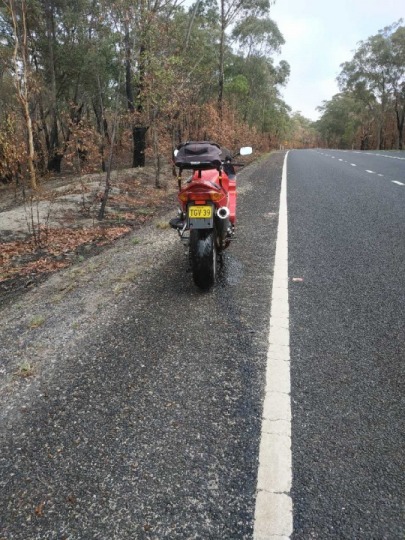 Yesterday on Facebook a frightening series of images were posted (they had been posted before but, anyway) of a car that had been following a van when one of the van’s disk brake disks had exploded. The disk flew through the air and embedded itself in the windscreen of the car. It was posted with a reminder that you never really know what’s waiting around the next corner (don’t I know THAT?) It reminded me of an incident that happened to me some years ago which I have previously related here.

I was riding home from Newcastle and was on the F3 just after the road from Toronto joins it.  I caught up with a low-loader semi trailer who was travelling pretty quickly because the trailer was empty. I pulled out to pass and, just as I did, one of the tyres on the rear axle exploded. I didn’t get time to DO anything except tense up as a big piece of rubber peeled off the tyre and headed straight towards me. It struck me full on the chest and I buttoned off while I recovered from the shock. Gathering my wits I realised that I was uninjured and that I had managed to stay on the bike and in my lane (the speed limit was 110km/ and I was probably doing in excess of that.) The semi headed off into the distance, the driver unaware that he had a serious tyre issue and unaware that he had nearly caused what could have been a serious accident. I never saw him again but, when I got home, I had the memento of the incident, a large, angry bruise on my chest. It reminded me of all the times that we “dodge the bullet” so to speak, and how many times disaster passes close by without us being aware that it has happened.

And I received another reminder of this on Tuesday when an incident occurred that could have had vastly more serious consequences than it eventually did. Now, I hasten to add that the bike in the picture is NOT mine and that the incident I am going to relate did NOT happen to me.

On Tuesday, early in the morning, my brother, Paul awoke early and decided that he would do a Putty Run. Now both Paul and I know the Putty Road like the backs of our hands having both ridden it and driven it for well over 40 years. I wouldn’t say that we know every ripple and every pothole but it’s sorta like that. Having said that, neither of us treat the road with any less respect than what we did when we first started riding it in the 70’s.

And, it’s a good thing, too. Just before the end of the dual lane section that leads into Colo Heights, Paul ran over something on the road. He barely had time to register that he had done so before he looked in his rear view mirror and saw a plume of blue smoke emanating from the back of the bike. He pulled the clutch, killed the engine and ghosted to a stop on the roadside. Being a predominantly front brake braker was good because, when he got off the bike he could see that the whole of the rear of the bike was covered in oil. A long oil slick ran from the apparent point of impact to where the bike had stopped (see pic above).

Closer examination revealed that, whatever he had hit, it was something much more substantial than a tree branch or some natural litter. The fairing was smashed and it was clear that the engine had been damaged as well. 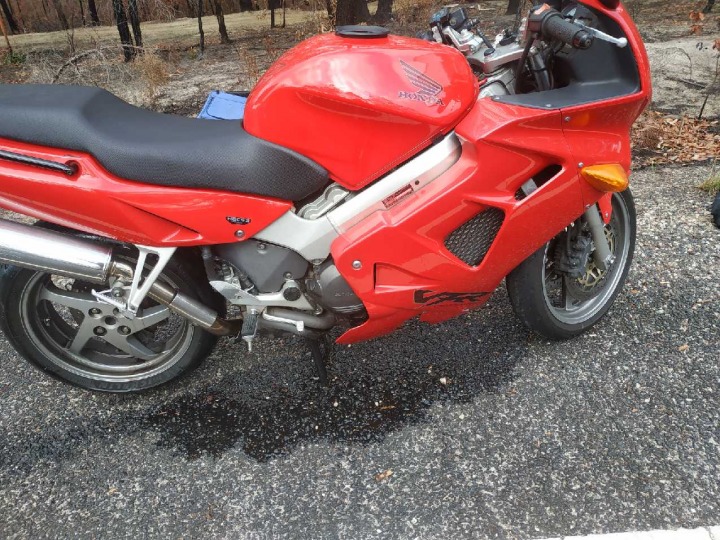 Hours later, when pickup had been effected and the bike had been returned to the shop, the full extent of the damage was revealed. The right side fairing panel will have to be replaced.. 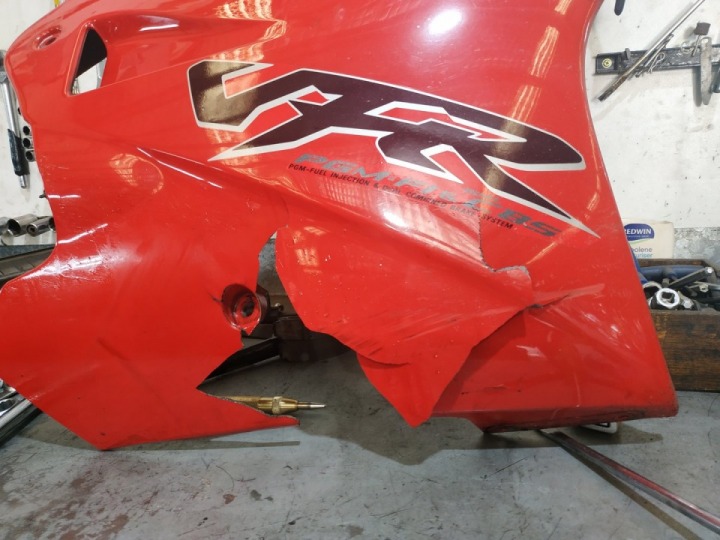 And there is a hole the size of a softball in the sump. Neither the offending item nor the missing piece of the sump have been found despite an assiduous search. 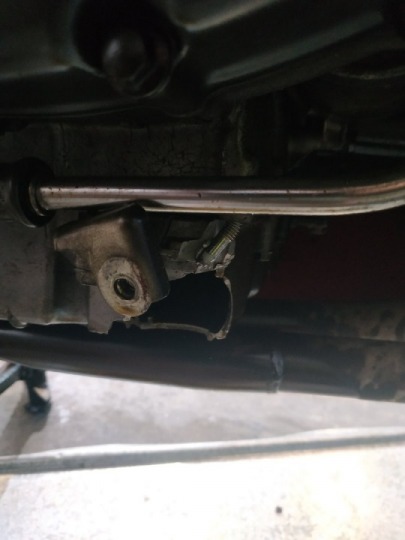 Thankfully he shut the motor down almost immediately so there is next to no likelihood that the engine has been damaged and insurance will cover the cost of the repair, but it was a salutary reminder that when we travel the roads, we must always be prepared for the unexpected and the dangerous. I don’t know how long the bike is going to be off the road but my guess is that it isn’t going to be a quick fix.

What’s the old saying, “Never ride faster than what your guardian angel can fly.”