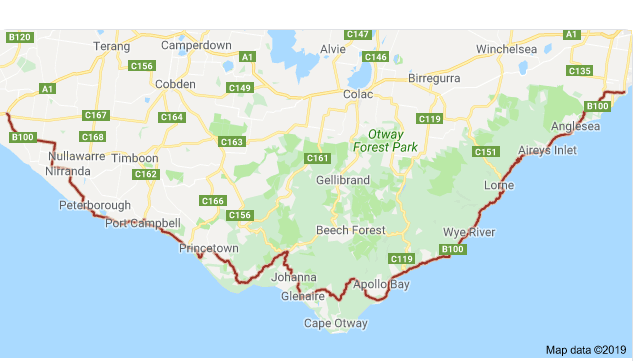 Every country has its “must see” destination, whether it be the Grand Canyon, Stonehenge, Niagara Falls or the Pyramid of Giza. In Australia we have a raft-load of them which is probably why Australia is such a popular tourist destination for people travellling from overseas. And it’s not just the overseas visitors that flock to see our many wonders, both man-made and natural. As Australia is such a vast continent, you could travel for a long, long time and still not see all the things that are worth seeing.

One such wonder is the aptly named Great Ocean Road. Beginning at Torquay in the east, the road hugs the southern coast of Victoria all the way along to Warrnambool in the west. Assuming you’re travelling west out of Melbourne, the road is bounded on the right hand side by amazing bushland and coastal flora and, on the left hand side by Bass Strait with nothing but ocean between you and Antarctica.

If it’s natural wonders you enjoy then GOR has them in abundance, but most notable are the famous 12 Apostles, a collection of limestone stacks that protrude up out of the ocean. Sadly, the ravages of the ocean have taken their toll on these iconic landmarks with there now only being 8 remaining. Regardless of the reduction in number, they are still worth seeing.

However, this is not intended to be a travelogue but a look at the GOR through motorcyclist’s eyes. Patently, a road that hugs the coastline is going to be filled with twists and turns and twists and turns the GOR has in abundance. Not only is the road a constant series of curves, many tight and tricky, but it is also a switchback of elevation changes. The road plunges downhill till it reaches its lowest point where a creek or river valley is crossed as the waterway makes its way to the ocean. Then it rises again until you are high above Bass Strait and given the opportunity to stop and admire the beauty at the the large number of roadside lay-bys. From there it drops again and so the process is repeated over and over again. Rarely are you out of sight of the ocean (though more of that later) and care must be taken to concentrate on the road as the scenery is so captivating.

I first rode the GOR in 1983. My WordPress guru, Chris Mundy and I rode down to Melbourne from Canberra on the October long weekend, stayed with my brother in the Dandenongs for the night then did the GOR as far west as Port Campbell before returning back to base for the night. While it was an amazing experience, it was somewhat tarnished by the horrific evidence that was still apparent from the disastrous Ash Wednesday bushfires earlier on that year.

However, this did not stop the enjoyment of riding this fabulous road. I will admit to over-cooking a few of the closing radius corners but if Chris, who was travelling behind me at the time, saw , he was much too polite to remark on it. 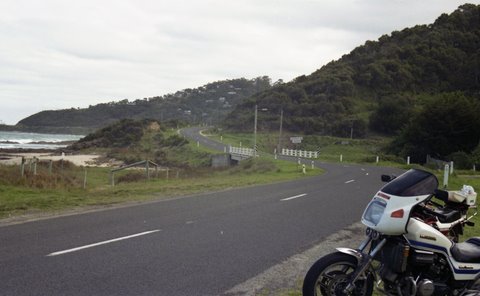 I will include some other photos from my 2005 trip in the gallery below. Those of you who know Chris will already know that any road trip you do with him is a hoot and this one certainly was.

In the intervening years I have travelled the road quite a few time, on both two wheels and four. It is always enjoyable and always worth the trip. Here’s a shot from one of my later tours this one with my late lamented friend, Hilary Morton and a group of his mates from Canberra, all of them on cruiser bikes, the things we do. 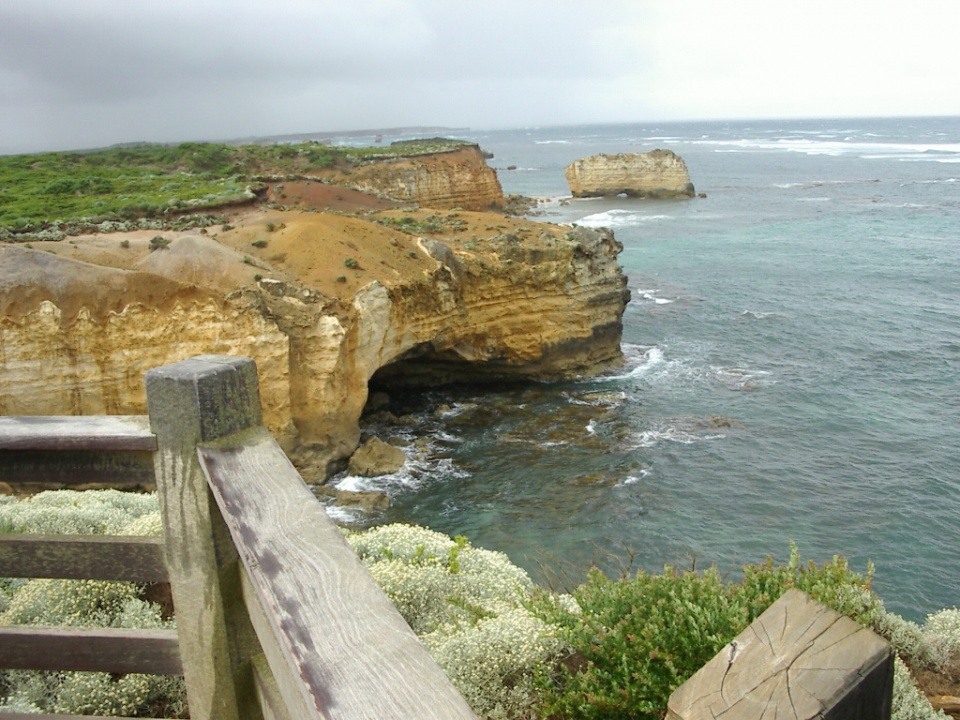 Now, that was now, this is then. Lots of things have happened to the GOR over the years, the most significant being that the TAC (Victoria’s road accident Nazis) have discovered that motorcyclists love the Great Ocean Road and love going fast on it. Now they don’t really care if we kill or maim each other, after all, we’re motorcyclists and we’re expendable. But, God forbid if our enjoyment of this magnificent road should frighten or endanger some cashed-up Japanese tourist dawdling along at below the speed limit while watching the ocean instead of he road. So the whole road is now blanketed by a 60km/h speed limit and it is viciously policed. That’s not to say that you can’t enjoy it, you just can’t enjoy it as much.  Be warned.

There are some other cautions, one already flagged above. Since the scenery IS spectacular and a vast number of both domestic and, especially, overseas tourists use the road, the general level of their attention to their driving is appallingly low. So, ride with the certainty that the people with whom you are sharing the road are even more inattentive than what they usually are and you’ll be a lot safer.

Secondly, there is the weather. Now, as Mark Twain said, “Everyone complains about the weather but nobody does anything about it,” You can’t control what the conditions will be and I HAVE ridden the road in the rain (and driven it too) and, believe me, it is no picnic. Patently, pick your day if you can. The caveat above about inattentive tourists applies doubly if you do happen to be on the road in poor weather. Remember that there is nothing between you and thousands of miles of ocean and adjust. Fog is also a regular hazard, especially in the more low-lying sections of the road. And that’s not confined to the mornings, either; I’ve ridden through fog in the middle of the day.

Stop as often as you can to not only admire the scenery and take happy snaps but also to let the gluts of traffic that inevitably build up clear so you can have a better run when you get back on.

Watch the road signs. Seriously? It’s only one road, right? Yes, it is but inattention can be your undoing. On the 2005 ride with Hilary and the boys, Frank and I got separated from the group and ended up heading up into the mountains on a narrow, twisty little road. It was raining AND foggy and it was pretty hairy to say the least. We eventually rejoined the road somewhere further east, relieved that we had retrieved a mix-up that had caused a few “flutters”

Bearing in mind that the road is in the west/east direction for the majority of the time, make allowances for this and the orientation of the sun when planning your ride. Spending a couple of hours squinting is not fun.

With this in mind, and also allowing for the above cautions, it is my advice based on my experience that the GOR is much more enjoyable when travelled west to east rather than the other way around. Most traffic is heading OUT of Melbourne rather than towards it and you’ll get a better run (why would anyone want to head INTO Melbourne, anyway?)

Despite all the less than complimentary things in this post, I can heartily recommend that you do the GOR if you can. Those of you that have will certainly agree. It IS a “must ride” road to ride if you can.