My introduction to motorcycling, as I have detailed before, was entirely accidental. Bob Holden was a good mate at my church at Port Kembla and he and I, along with another friend, had a folk music trio that used to perform at church and at other places around Wollongong. Blas (the 3rd member) played a gorgeous 12 string Maton guitar and along with me on my Maton and Bob on a 5 string banjo, we made a wild ensemble. As well as music, our other shared passion was cars and Bob (a relative of “the” Bob Holden, winner of the Bathurst 500 mile race in 1966) and Blas and I spent nearly as much time talking about cars and racing as we did about music. Bob drove an LC Torana and Blas had done his apprenticeship at the BP garage at Warrawong which was a VW servicing centre. Consequently, Blas had a VERY hotted up red Beetle in which he used to terrorise the local hot car fraternity. I had my old Hillman Minx which was anything but hot but I was the real car racing “nut” of the three of us having been one since 1959. I regularly attended car race meetings at Oran Park and especially liked the night meetings there where the racing took place under lights, yes, really.

Things move on, as they do, and Bob was offered the opportunity of a 2-year contract working in the mines at Mt Isa. The pay was spectacular compared to what he was getting at the steelworks and he grabbed it. Blas and I soldiered on with the group but it wasn’t quite the same without Bob and his banjo and then, in February 1972 I went into the Army and that brought the muso deal to an end.

The two had years passed quickly and Bob had been very busy and, before the days of mobile phones and the internet, I hadn’t heard from him at all. Then, he arrived back in Wollongong, driving a brand new HQ Holden Premier V8, towing a 21 foot caravan and promising the imminent arrival by courier of his bike. “Bike?” what was this bike thing? Well, you know the story. Bob and Sharon had done well from the contract and Bob soon turned up on a lovely Yamaha TX500 twin. And it was on this bike, in the summer of 1973, that I had my first motorcycle ride, at a Sunday School Picnic at Cordeaux Dam up on the southern highlands. 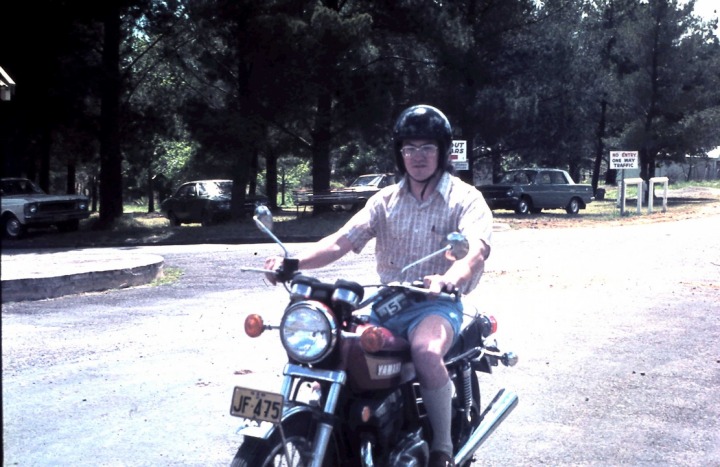 As you already know, I was hooked and I immediately started looking around for a bike for me. I knew nothing about bikes and, as you do, I went to Bob for advice. He had had a mate in Isa who had a Honda 350/4. Bob had ridden it and said it was a lovely little bike, so I started shopping. We spent the day in Sydney hopping around the bike shops (there were plenty back then) and car yards hopeful that a “possible” had been traded for a car. By the end of Saturday we had narrowed the choice down to three. A lovely little GT185 Suzuki two stroke, a very sweet Honda CB250 twin and a cherry red Honda 350/4 at a car yard in Ryde.

It was a no-brainer, really. It had to be the cherry red Honda. I left a deposit and on the following Monday, we drove back up to Sydney, paid the balance and Bob rode it home while I followed in the car.

The bike was a 1972 model so it was about 2 years old. It had been looked after well It had crash bars fitted front and rear, an important consideration and I very quickly fitted a set of Fiamm air horns that were left over from a car project (what was I thinking?) In my defence, the Honda horn was pathetic so, even though it looked horrible, the air horns were a safety feature. Even though the bike was only two years old the stock 4-into-4 exhaust system had already rusted out and had been replaced with a very daggy 4-into-1 that had no baffle and sounded horrendous. I made up a baffle and that helped a little but Bob came to the rescue, buying me a complete new stock system that not only looked “right, but sounded delightful as well. 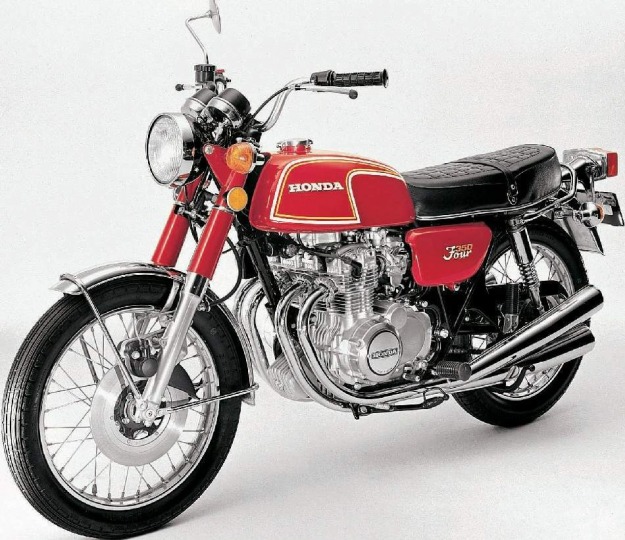 The 350/4 was the baby of the Honda 4 family and many attempts were made to give it styling cues and features that made it look like it belonged. The motor was sweet and revved like crazy. On the down side it only had a 5-speed gearbox, that shortcoming was removed with the arrival of the 400/4, the 350’s next model. It was also a little “plain” by comparison with other bikes, especially since it was supposedly the “sports” 350 in comparison to the “commuter” CB350 twin cylinder model out of the same stable.

Nevertheless, I loved it, as you inevitably do with your first bike. As soon as I got my Learner’s Permit, I came straight home, put the “L” plate on and rode up Macquarie Pass. How prescient was that?

Now, that very long and detailed narrative serves to set the stage for this video which was posted on another motorcycle forum that I inhabit.

There is so much to like about this video. It illustrates that the legendary Honda build quality DOES exist and that, with a very small amount of work, even a “barn find” like this one, can be brought back to life pretty easily and quickly. It is also an excellent “primer” into what DOES need to be done if you are planning on restoring a 1970’s Japanese bike. The guy is a very thorough mechanic and he does the work very well. I was especially impressed with his use of baking soda in a bead blaster gun to remove the oxidation on the alloy parts, I am going to try that. I hope you enjoy the video.

For the record, I paid $700 for my 350/4 and I sold it a couple of years later for the same amount so I got a good deal. Should you wish to buy a good example NOW, you will almost certainly have to part with at least $5000, such has the asking prices of the early Honda bikes risen. Would I buy another one? No, I had it AND I had a 400/4. If I WAS in the market (and I stress that I am NOT) I would want a 500/4 in bronze and black like my later bike was. The 500 motor was the sweetest of the “fours” and that is reflected in the prices that are being asked for them now. 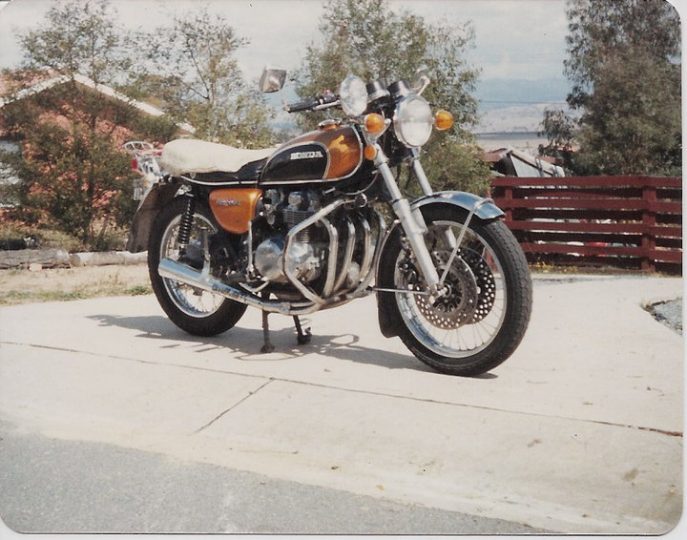 As for the picture of my lovely wife at the head of the article, my wife had become my wife BEFORE my love affair with bikes began and she sometimes says (in jest) that, had she known that this was going to happen, she would have thought twice about my proposal. This was one of less than a handful of times that she ever sat on any of my bikes and it didn’t end well. Like the classic scene in “On Any Sunday” where the neighbour is trying to teach the novice rider how to ride for the first time, Helena wobbled out of the driveway, across the front lawn, panicked when she saw the side fence coming up and crashed the bike into the front of the house.

We rarely ever realise that decisive moments in our lives ARE decisive moments until after the moment has passed but this was such a moment for me. Rushing across the lawn, I helped her up and asked, “Are you OK?” Little did I realise how important those few words were because, as she said later, “It was then that I realised that I was still more important to you than you bike was.” Had I first asked, “How is the bike?” I think that things may well have turned out quite differently. 🙂

So, a long walk down memory lane, some interesting mechanical tips and bit of humour as well, what more could you want?