You are here: Home / August 2019 / Introducing Goldie (and, yes, it’s not a very imaginative name but I have my reasons) 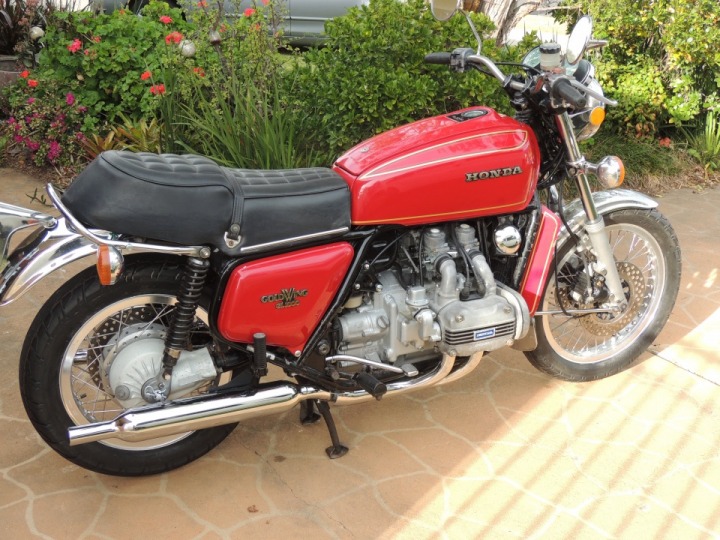 Almost exactly 5 years ago an old speedway mate of mine here in Wollongong posted up this photo on Facebook. 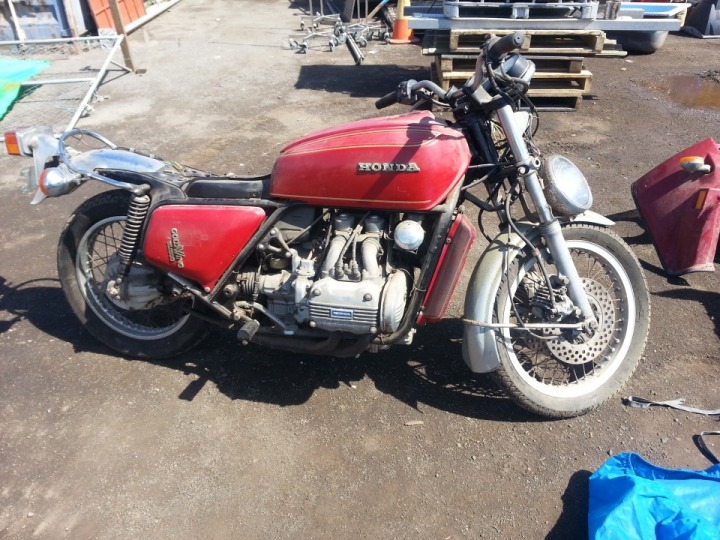 ..along with the comment, “Is anyone interested in this?” I immediately answered that I was and asked him not to do anything with it until I’d had a look at it. I’d always wanted an original Gold Wing ever since riding a brand new one in 1975. So, I hot-footed it over to Rob’s scrap metal yard for a look. The bike actually looked worse than this in the metal so I asked Rob what the story was. Apparently the bike belonged to a friend of a friend who had passed it on to Rob so he could scrap it. Rob was perplexed as he thought that it was too complete to junk so he posted up on Facebook to see if anyone wanted to rescue it.

When I said I was he said he’d have to ring the owner and ask if he was interested in SELLING the bike and that he’d get back to me. It took a couple of days for an answer but the owner said that he’d never even thought of selling it as a project but he would be interested. He asked Rob how much he should ask for it and Rob just said, “Oh well, how about $500?” That seemed suitable so Rob rang me and told me the news. I knew that it was going to be a money pit so I needed to get it as cheaply as I could so I offered to buy it and went over to the yard with the trailer. While I was there, Rob rang the guy and said he had a buyer and that I was offering $400. The owner, realising that he had under-priced it, said that he’d like to get $1000 but Rob said that he couldn’t really do that since he’d already said $500 was OK. I held my breath. End of story, I got it for the $400, loaded it on the trailer and brought it home.

When I first saw it Rob told me that the muffler was missing, as was the seat. I didn’t really care about the muffler because I knew that it would have been rusted out anyway. When I went to pick it up, the owner had found the seat and had dropped it around to the yard. It was almost like new! It came with a box of bits and a grotesque Windjammer-replica fairing. That got moved on to a gentleman down the street who rides a 1977 BMW. I don’t know what he plans to do with it but I wasn’t planning on using it so I didn’t care.

First order of business was just to give it a wash and clean-up so I could see what I was facing. Amazingly for a bike that was 39 years old at the time, it scrubbed up pretty well; at least well enough to indicate that a restoration of sorts was well worth doing. 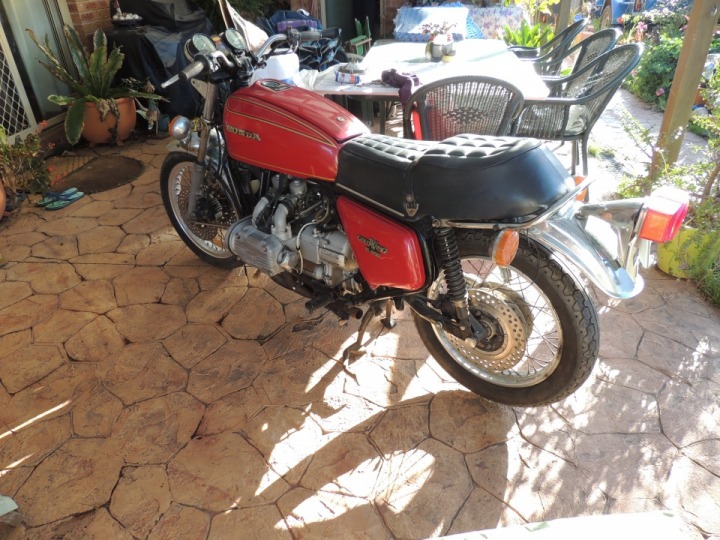 I joined a couple of GW groups on Facebook and started asking some questions and the answers seemed encouraging. They told me what to look out for and what probably needed to be done. And there the process stalled for a couple of years as life, as it does, got in the way. Helena fell very ill with Graves Disease and it was all hands to the grinders until we finally got to the stage of having the operation to have her thyroid removed. The operation was a stunning success and life started to get back to normal. In the mean time I had established that at least the motor turned over (no battery but it does have a kick start lever) and that the motor was probably in reasonable shape internally.

Now I am no mechanic as my previous efforts with the Shadowfax Kawasaki had proved. I’m great at pulling things apart, hopeless at putting things back together. As with the Kawa, I needed a “guru”. Now Dave was out because he’d rather eat worms than work on a HONDA 🙂 so I had to look elsewhere. And it was here that my good mate from Canberra Road Racing Club stepped in. Greg Stevens (aka Grubastini) was a Foundation Member of CRRC in 1977 and had been a mechanic at City Bike and Car Sales, the main Honda dealer in Canberra at the time. I ran the idea past him and he, very graciously, said, “Sure, I’ll take a look.”

So, the bike went to Canberra, coincidentally the same city where the Shadowfax restoration had taken place. Greg was much more hopeful once he’d actually seen the bike and we agreed on the terms and conditions. It was never going to be a concours restoration. The object was to fix up all the safety and mechanically-related issues that needed fixing and make the bike safe and enjoyable to ride. So, with that brief in mind, the bike disappeared into Greg’s shed and work began.

That was over two years ago and the restoration has proceeded in fits and starts since then. The usual reasons for this apply. Greg’s restoration work IS his day job and so my work has often had to take a back seat to customer jobs that would keep the cash flow going and food on Greg and Kathy’s table. Securing the necessary parts has been a slow process also since the bike is 40 odd years old and most parts are not available OEM any more. And my limited income (old age pension) has meant that funds to keep the project going have been limited in the extreme.

However, Greg is not only an excellent mechanic but he is also an excellent “scrounger” and his ability to source and secure the bits that I have needed has been a story in itself. The exhaust was always going to be an issue, for example. Not only was the muffler missing altogether but the headers were rusted beyond reclamation. A good quality set of headers was sourced from the States and Greg just happened to have, left over from another job, a brand new set of modern Triumph mufflers that, with a little bit of “jiggling” fitted perfectly, look good and sound great. This is just one example of the dozens of tricky ways that he has solved the various problems that have arisen during the progress of the restoration. Indeed, the number of “above and beyond the call of duty” things that have been done on this job would fill a book.

And now she is finished. Greg has “road tested” the bike several times (but you didn’t hear that from me) and pronounced it strong and quite amazing given its age and the condition it was in when it arrived at his place. The brakes are still a bit “wooden” with new pads still not bedded in, but it all works, every electrical item is functioning and my brother even pointed out yesterday that it was very nice of Honda to put my initials on the right hand switch block. 🙂 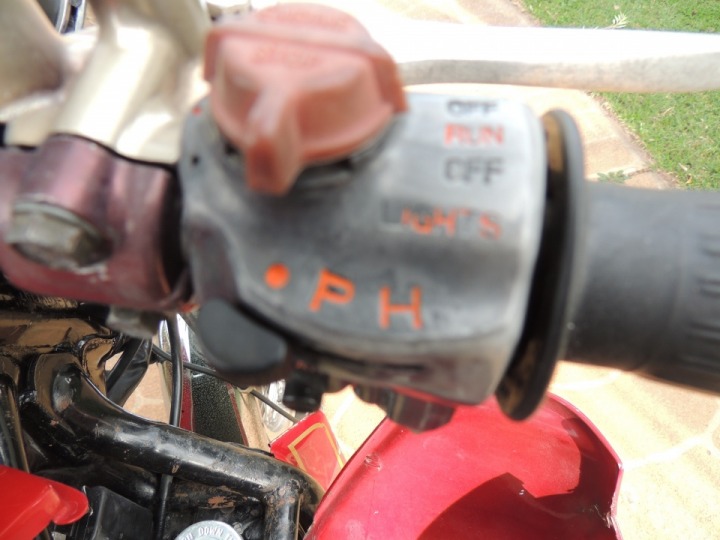 So, yesterday, my brother and I trundled down the Hume to Canberra and picked the old girl up and brought her home. Cash was exchanged for goods and I found it hard to find the words to adequately thank Greg for all that he had done. 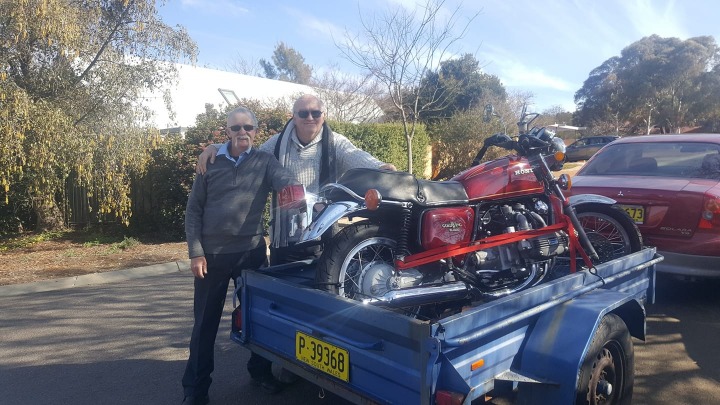 I know that he is very satisfied with the job and I know that his long-suffering wife is MORE than happy that it’s gone! The machine inspector from CEMCC is due soon to do the inspection so that  can get my historic registration sorted and then it will be go, go, go.

Below is an album of pictures of the bike in “as finished” condition.

Oh, and “Goldie”? Yes, I know, not very imaginative but I DO have a reason. She’s “Goldie” because she’s HORN!!