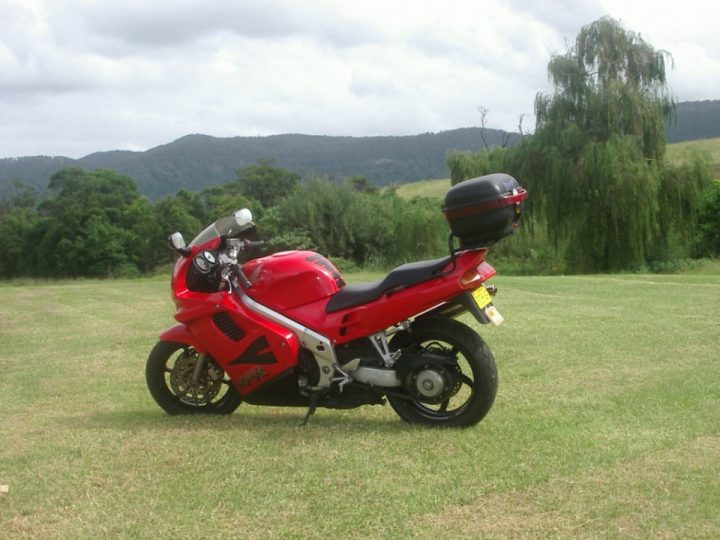 Elsewhere on this site I have told the story of the various bikes I have owned since I first started riding in 1974. It’s fair to say that I have been a Honda man, since my first bike, a lovely little cherry red 350/4. I have owned many other brands but I keep coming back to Big Red. And, since 2002, I have been a VFR man with only a short period of time when I wasn’t riding one of Honda’s iconic V4’s. So, in a moment of sheer self-indulgence, I thought I’d take you through the list and highlight the (mostly) high’s and a couple of lows along the way.

Up until the turn of the millennium I was almost exclusively a middle-weight bike rider. The only big bike that I had owned up until then was a Suzuki GS850G touring bike, a bike that I found to be completely competent but utterly heartless. It was sold and I went back to my sentimental favourite, the CBX550. 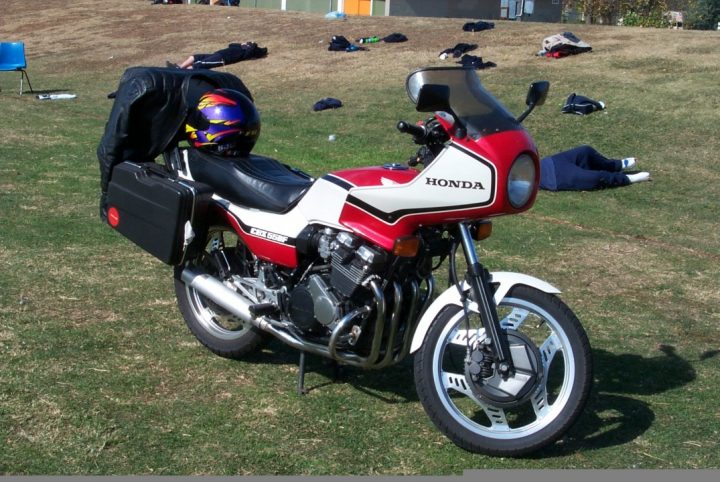 However, even my loyalty was beginning to be tested by the failings of the little 4 and the prospect of sourcing parts becoming increasingly difficult. So I consulted my tame mechanic, Rick Miller, of RAM Motorcycle Engineering in Canberra where I was living at the time. I said I wanted something a bit bigger and a bit newer, what did he recommend? He suggested three bikes and told me to go away and do some research. Two were Suzukis, The RF900 Manta Ray and the GSX750F tourer. The other was the VFR750 Honda. Using the rudimentary facilities of the internet of the day I scoured road test reports as well as visiting dealers where I could examine the bike in person.

The RF was the first to be discarded; it was flash and powerful but it was heavy for a 900 and even then, spares were starting to become a problem. The fact that it hadn’t been a great seller up to that stage also suggested that a lot of people knew a lot of things about it that I didn’t know.

So it was a choice between the two 750’s. The Suzuki was swish and very alluring. It had a great engine and a fanatical following amongst its owners. However, there were two “minuses” that weighed against it (well, three, actually). The first was servicing costs. Rick told me that, in order to do basic servicing, most of the fairing needed to be removed, thus adding considerably to the cost of getting the work done. The second minus was so trivial that I am almost reluctant to mention it here but I must. The VFR had a clock in the dash and the Zook did not. The third minus, which really was the elephant in the room, was that the VFR was a Honda and the 750F was not.

It happened that Rick had quite a few customers with VFR’s so I asked him to keep an eye out for one that was for sale and for which he could vouch. I wasn’t in a hurry and it took a while before he rang me and said that one of his customer’s wives was selling her 750, was I interested? After an eye-opening test ride down to Coppins Crossing and back I replied that I was. The bike was so sophisticated, so MODERN, so FAST compared to the CBX550. Money was exchanged for goods and I became a happy VFR owner (that’s it in the picture above). I sourced a 2nd hand Staintune high pipe and began the joyful process of getting to know the most versatile of bikes.

We bonded very quickly and the love affair lasted 4 years until I encountered a diesel slick on Macquarie Pass and things got ugly. You see, nobody had bothered to tell me that, if you have a bike that you bought for $4000 and you insure it for $4000 the insurance company is most likely to write it off if it sustains even a small amount of damage.

After having the bike taken to my mechanic’s in Wollongong, I was horrified when I turned up there the next day to retrieve my Staintune pipe (just in case) to be told that the assessor had already been and that the bike had been written off and was on his truck on the way to Sydney. I should add that the bike was repaired and later on-sold by the same company with the addition of a new instrument binnacle (that had NOT been damaged in the accident) showing just under 60000km when the REAL mileage was OVER 163000kms!

So, can I find another VFR? Wouldn’t you know it, there were dozens of them! And, surprisingly, there were some 800’s around at similar prices to the earlier 750. Why not upgrade at the same time. I found a lovely 1997 800 in Sydney, test rode it, paid the money and rode it home. 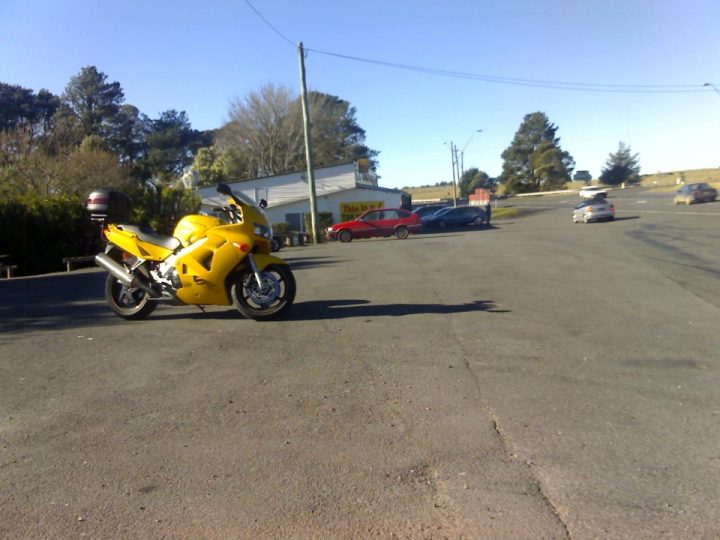 My somewhat hasty decision to base my purchase on a quick ride around the block in suburbia was to prove costly. The bike itself was delightful, came with some extras like a Bagster tank cover and bag and a Ventura rack. The bodywork was spotless and, while I didn’t know it at the time, it must have been one of the first 800’s sold, being an August 1997 model. It didn’t take long for the gremlins to attack. Firstly, i fell victim to the dreaded Regulator/Rectifier fault that plagues any Honda of the period. That solved I started to notice that the handling was less than what I had become used to with the 750. The bike seemed to consistently run wide on right hand corners particularly, and, despite me riding with a whole tribe of very knowledgeable riders, none of their suggestions or fiddling with the bike seemed to make any difference. It just wouldn’t handle.  I even went for a ride one day with a very experienced rider who was also a part-time racer. Somewhere up on the Old Pacific Highway we swapped bikes so that he could experience my issues first hand. At the bottom of the hill at Brooklyn we stopped and he told me what I had already told him, the bike just wouldn’t go round corners properly. I was disappointed on two fronts. Firstly because I was hoping that he’d have a solution but secondly because I had to get off his almost new Gixxer 750 that I had been riding and get back onto my own unfriendly steed!

I should also add that it was this bike that started my “tradition” of giving my bikes a name. Actually, I didn’t even do that but it ended up with a name anyway. The first three rides we went on together it rained so it wasn’t a surprise that some wag christened the VFR “The Yellow Submarine”

Name or not, it had to go. I had used up all of my resources and knowledge and riding it was now a frustration rather than a joy. It went to a guy in Sydney who, it turns out, was a member of OzVFR and it was he who soon revealed the source of my problem. While checking the bike over himself, Andrew found that the front forks were bent. Ouch. You can imagine how I felt when I found out. He graciously accepted my apology and my assurance that I had, myself, bought the bike in that condition and had on-sold it unaware of the issue. Needless to say, a quick front suspension overhaul saw Andrew put in many happy miles on TYS before he on-sold it again in favour of a 6th Gen.

Now, MotoGp was coming up and our group had a big ride planned, so, with the money from the sale of TYS in my hot little hand, I went looking for another VFR…no deal, I couldn’t find even a bad one and the deadline was getting closer. In the end it was either buy the neighbour next door’s VTR1000 Firestorm or not go. I bought the VTR. It was black, had had the stock pipes gutted and it sounded AWESOME! It handled the trip to and from PI well with the exception that I got very familiar with many petrol stations along the way courtesy of the bike’s tiny fuel capacity. I kept it for a while longer but it never “grabbed” me like the viscous spread of power the VFR provides. 1st gear was very low then there was a big hole between it and 2nd and riding around town just wasn’t pleasant. Fuel capacity militated against it on tours, playing tunes on the throttle and the open pipes was delicious but, in the end, it had to go.

That will do for now, I’ll pick up the story next time…thanks for reading.