You are here: Home / News and Updates / The dying Swann

Earlier this year it was announced that the specialised motorcycle insurance company, Swann Insurance, was closing its doors. Swann, already long absorbed into one of the larger insurance giants, had operated in Australia since the late 1970’s and was the first insurance company that offered specific insurance for motorcycles, something that had been sadly lacking up to that point. As the logo indicates, the company obviously had a longer history than that but it wasn’t until the late 70’s that they became well known here.

Swann’s marketing and promotion was widespread and pervasive. EVERYONE involved with motorcycling soon got to know about Swann and they certainly did good business and received good feedback from the motorcycling fraternity with competitive pricing (far better rates than what had been offered by the existing insurance companies, most of whom didn’t want to even KNOW about bikes let alone insure them) and excellent service if it became necessary to lodge a claim. It’s fair to say that, with over 30 years of service to the motorcycling fraternity here in Australia, they deserve a big thank you for filling a gap that had previously been unfilled and for doing their job well for such an extended period of time. Of course they must have made huge amounts of money during that time but it’s being very uncharitable to deny them that since that this the business that they chose to operate. It’s pretty simple, really. If you don’t like the idea of insurance companies making huge profits (they bring in excessively more money than they pay out), then don’t insure your bike. That way the insurance company isn’t making money out of you. Of course, if you happen to t-bone a diplomatic corps Mercedes, well, on your own head be it 🙂

With the arrival of a squillion more insurance companies in the market, many of which were providing specialised motorcycle insurance (heck, even the “traditional” companies now offer competitive rates to insure your bike,) Swann have decided to ease out of the market. We owe them a lot. Not only did they highlight how appallingly the existing companies were treating motorcyclists before they came along, but they more than adequately filled the void and did so for many years.

But, of course, there’s more to it than that. As an integral part of their advertising and, hence, their public profile, Swann Insurance’s involvement in motorcycle SPORT is legendary and worthy of mention. Very early in their history here they realised that an effective way of “flying the flag” for the company was to put the name out there in the very public arena of motorcycle road racing and so the Swann International Series was born. In itself, the concept was not new. Swann officials no doubt looked back to the 1960’s when the Tasman Series (a road race series for CARS) was a fixture on the Australian and New Zealand racing calendar. A Summer series for Formula One drivers, it featured 6 races, three in NZ and three in Australia with holidaying F1 drivers mixing it with the best of Australia’s open-wheel racing stars. It was huge, and hugely enjoyable. Short of spending your yearly wage going to Europe to watch the F1 races, you could go to Pukekohe or Warwick Farm and watch Jack Brabham and Jim Clark (plus a host of others) duking it out on your local track. I watched Jim Clark race at Warwick Farm in January 1968 never knowing that, just a couple of months later, he would perish in an horrible accident at Hockenheim, bringing to a close the career of the driver who I regard as being the greatest ever. The Tasman Series was ace.

And I’m certain that the Swann officials had the Tasman Series in mind. The execution was truncated somewhat being restricted to Australia, but the multi-venue format remained. The races were held in Melbourne, on the Calder Park Circuit and also at Sandown Park. Sydney’s Oran Park Raceway hosted the NSW leg while the Adelaide International Raceway hosted the South Australian leg. Queensland races took place at the Surfers Paradise International Raceway and most fans, if they could afford it, followed the circus, making the series into an enviable summer holiday, tripping around the states, watching the races. I include a link below to the finale of the 1980 series, held at Sandown Park and featuring some (many) names that will be familiar. I travelled down to this meeting with my good mate and photographer, Len Smith https://www.facebook.com/sportzcam.media and we stayed at the comfortable and very amenable home of Maurice and Betty Quincey, parents of Australian road racing star, Ray Quincey. This was just after Ray had had his career-ending crash in Belgium and Ray and Betty had spent a lot of money modifying their home so that it was wheelchair-friendly for Ray. It was a bitter/sweet visit after having seen Ray at his best on the track, knowing that he would be confined to the wheelchair for the rest of his life. He was still in his 20’s. 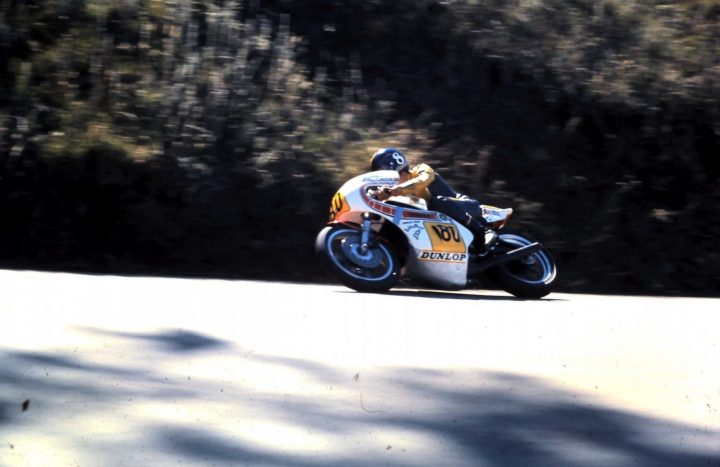 As a dyed-in-the-wool Honda man, the 1980 series was a disappointment for me (though seeing Ron Boulden win the final race sort of helped). Ron Haslam’s ultra-expensive Honda F1 bike had proven troublesome and it wasn’t until the last race of the series that it really showed its potential but it was too little, too late. Still, it was great to see it in the pits and to listen to the sound of that glorious engine and exhaust booming off the roof of Sandown’s grandstand. Here’s the ABC video of the finale.

Commitments kept me from attending all the Swann races but I did get to the Queensland round in 1985 and had to opportunity of sitting in the Honda garage (the ONLY garage in the pits) and chatting, at his invitation, with Wayne Gardner as Jeremy and the crew worked on his NSR500. Sitting in one of his director’s chairs while the “plebs” looked on from behind the ropes, was quite a thrill! 🙂

That year was a cracker because, as in previous years, if you were unable to get to the races, the ABC provided an excellent live telecast all over Australia. It was in the 1985 series that the promoter offered a $50000 bonus to Wayne Gardner if he could win all six races (two in Melbourne, two in Sydney and two in Qld). This was a massive amount of money in the day and Swann must have thought that, despite the risk of a huge payout, their money was pretty safe. After all, WG was on the NSR, the 4 cylinder, current model GP bike and the best chance of beating him was Tasmania’s Malcolm “Wally” Campbell on the Honda Australia NS500 two stroke, a bike that was already two years old.

Wally wasn’t at all fazed by reputations, however, and, in the screaming rain at Sydney’s Oran Park, he beat Gardner on the “old” bike and snuffed out the chance of the bonus being paid. I don’t know who took this photo but it is a gem. 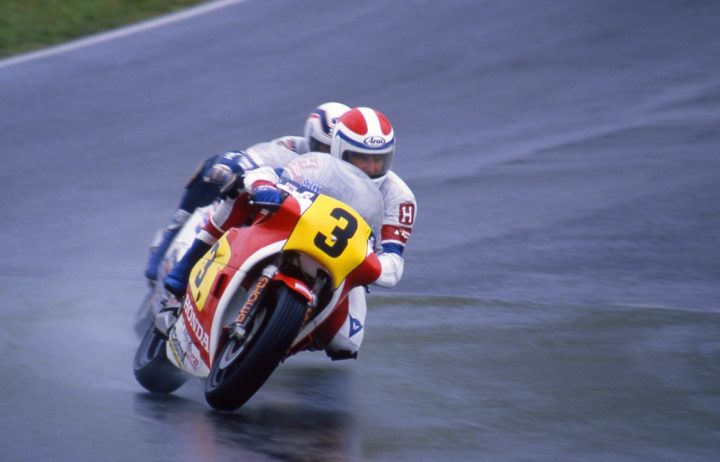 I remember sitting in the lounge room, screaming at the TV! However, as with all good things, it came to an end. Money was always the issue and the expense of freighting bikes from overseas as well as other problems eventually saw the Swann Series concluded. Like all good things, it was great while it lasted. I’ve included a little gallery of some other Swan n photos I’ve found on the net at the bottom of the page. And so the Swann died.

And, on the subject of dying Swanns, I can’t conclude without  mentioning the pretentiously named Swann Australasian Superbike Series, a later involvement of the company in road racing. Set up for the very worst reasons by a person for whom I have nothing but contempt, the “Swann” series was an attempt to wrest the running of Australia’s premier road racing series from the hands of Motorcycling Australia and make it a vehicle for the indulging of one man’s ego. Like most ventures based on spite it flourished for a little and now has floundered into a wannabee series that is really glorified club racing. All the factory teams have withdrawn their support and thrown their weight behind the ASBK, run by MA and television coverage, sponsorship and kudos are back in the place where they should be and, with the demise of the naming right sponsor, the “Swann” series can’t even call itself that any more. Forgive me if I fail to shed a tear. 🙂

So, farewell, Swann. You have been good for motorcycling for all sorts of reasons and we thank you.