You are here: Home / January 2017 / Something old, something new 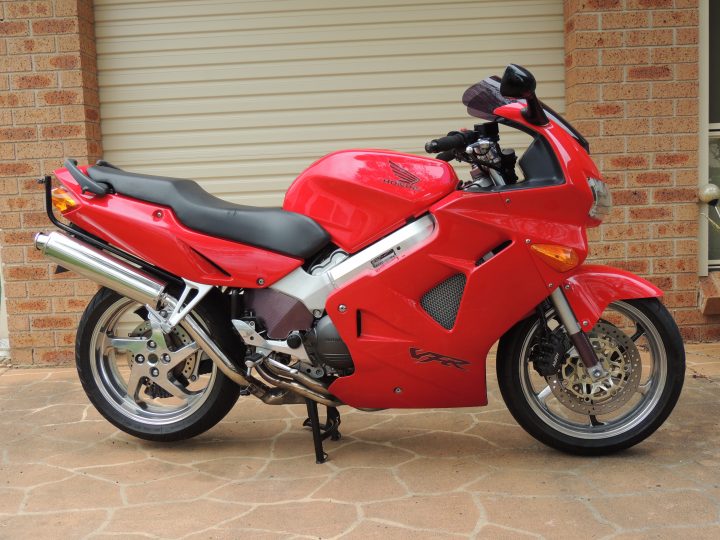 Red is getting on a bit. 140000kms on the clock now (nothing for a VFR, but still a few). She’s 23 years old this year and has had a pretty easy life. But there are bits and pieces that need doing and I must confess that, at times, I look at other shiny shiny new bikes and wish that mine looked like that. Well, as of this afternoon, it does.

A chance conversation at Grey Gum Cafe a few weeks ago led me to discover this little gem, coincidentally enough right in my own backyard. Serendipity? Who knows, but anyway it was a bike that the owner wasn’t even thinking abut selling. After a discussion he admitted that his “other” projects were taking up a lot of his time and that parting with the VFR might free up some garage space and also bring in some finance to help with the other toys in the shed. I didn’t push any as I hadn’t really thought of myself as being in the market anyway.

A couple of weeks passed and I got a phone call from Tony asking me if I was interested in buying the bike. Not really, it can’t hurt to look, can it? On the way to the speedway last Saturday I called in, did a quick appraisal as well as a lap around the block and the possibility began to firm into a probability.

Rhonnda, the name that Tony has given her, is a 1999 800, with just 53000kms on the clock. She has been scrupulously maintained and came with a host of extras, the most important being a set of stainless steel headers and a Staintune pipe (with baffle). Also on offer is a Bagster tank cover and bag, the original exhaust system, a Ventura rack, 1″ higher handlebars are fitted that come off the VF1000 Honda, the matching solo seat cowl as well as the complete original Honda tool kit. Tyres are excellent the front is nearly new. A nearly new chain is also fitted as is a manual cruise control. The headlights are protected by a perspex headlight cover and the standard wheels have been polished. The paintwork is flawless and the only blemish on the bike is a tiny tear in the seat that has been patched. In summary, it is as close to being a new bike without actually being one. The only major thing missing is the Owners Handbook but I am sure that I’ll be able to source one of those.

So this afternoon we went back to Nowra, parted with the appropriate money (very cheap given what it was buying) and I tootled home just as the cool change swept in from the South East. It all appears to be as it should be, the handling is pin sharp and the engine makes all the right noises. There is a tiny bit of hesitancy just off idle which I put down to the bike not having been ridden hard but a trip to my tame mechanic will sort that out.

So my love affair with VFR’s continues. Yes, it’s only four years newer than Red but it’s an eternity newer in terms of condition. Time will tell, but I think that Rhonnda and I are going to get along just fine. 🙂