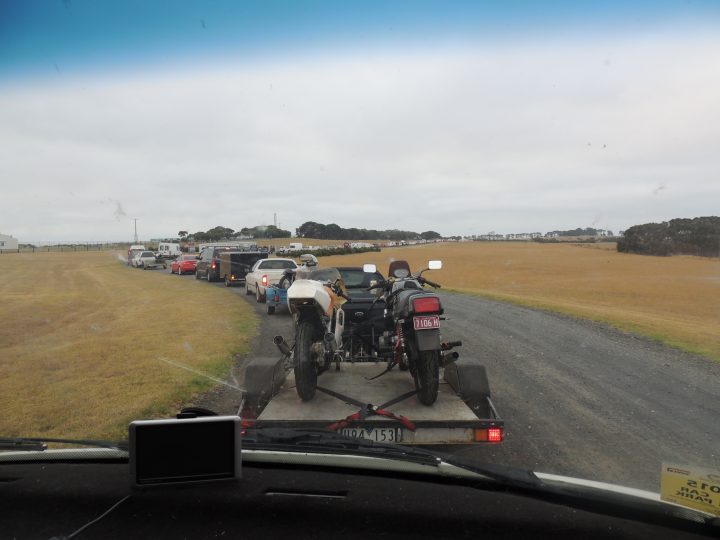 Today was an open track day at Phillip Island. Probably 98% of people doing the track day were competitors in the Island Classic but it was run as a track day with colour groups, etc. Sessions were short and the pick-up car did a lot of work, mostly, thank goodness, picking up broken-down bikes. Somehow it doesn’t matter how well-prepared you are, there are always a myriad of teething problems that affect your bike.

Such was the day today. Sticking float bowls, Fuel tank leaks, Fractured oil coolers (2x) One on an American bike and one on an Irish bike. Pat Mooney had one fracture after about six laps after having another let go after a similar time at testing back in the USA. Some questions are going to be asked when the team returns stateside.

The ever-present issue of “chatter” manifested itself early but improved as the day went by. Other minor issues surfaced and were “mostly” dealt with.

Poor Joe Weir’s bad run at the classic continued with his #1 bike trashing an engine in the first session, returning to the pits with evil-smelling blue smoke emanating from the exhaust. Fortunately, Joe also brought his Katana which was, as he said, “50% less power but twice the fun.”

Rusty Bigley spent nearly all the afternoon trying to solve a leak from the petcock and it resulted in Nick Ienatsch only getting in 10 laps all day. Oh well, tomorrow.

Mike Studinski (TZ Mike) seized #4 piston and he and Kurt Lenz honed the barrel, put in a new piston and reassembled it all only to snap off a bolt from the eater pump housing that acts also as a head steady for the head. So, tomorrow, the TWO heads will have to come off and be replaced…

And so it goes. I am sure that there are just as many hard luck stories up and down pit lane.

Forgive me, please, if my entries are brief, The days are exhausting and bed beckons. Oh, and along the way today, the central locking on the van has stopped working….