Some years ago (quite a few, actually) when I was revising the Kenny Blake Memorial web site, a friend told me that there was a photographer in South Australia who had lots of pictures of Kenny and that I should get in contact with him. I knew straight away the person to whom he was referring, but it took some time to establish the contact.

Robin Lewis (I used to always hear him referred to as simply Rob) was well known in his day as a brilliant photographer and was spoken of in the same terms as the greats of the era, Lou Martin, Greg McBean and so forth. But I also knew, even at the time, that Rob was close friends with Kenny Blake, living in the same town in the Adelaide Hills as the town in which Kenny grew up.

Through a friend of a friend, so to speak, I was able to contact Rob and was able to explain what I was doing. He was well pleased that someone was documenting Kenny’s career and offered to supply me with “some snaps” that he had taken back in the day to help me along. Sure enough, soon after a CD arrived that was crammed with photos of Ken from around 1973 right up to the time that he left to go overseas. Many of these I used on the site, creating a special album of just Rob’s photos.

Recently, Rob turned up on Facebook and began peppering his page with photos from back in the day. Albums of Intervarsity club days at Calder, Meetings from Winton and Calder Raceway and Adelaide International as well as candid shots taken in and around Strathalbyn and various race meetings. Checking out his albums has been the most amazing trip down memory lane. Since scanning and sending me the photos for the web site those years ago, Rob has assiduously scanned all of his negatives (black and white only) and published them and the collection runs to many hundreds of top quality, stunning images like the one above.

Rob’s images capture not only the intensity of racing but also the humanity. His photos of Kenny in and around Strathalbyn are moving in the extreme and they show the quiet and human side of the man that only those who knew him could have experienced. 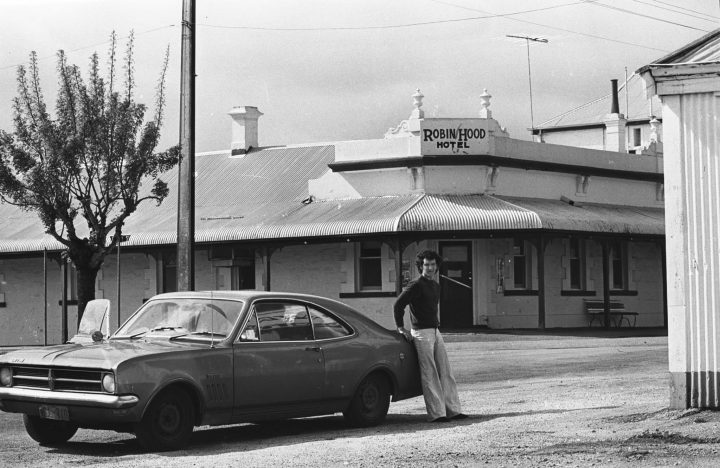 I cannot provide a link as such because there are a couple of dozen albums but, if you are a Facebook member, I do recommend that you take some time to browse his albums. I cannot recommend highly enough his dedication to his craft and his astonishing ability with a camera.

In other matters, Happy Easter to all of my readers. Tonight is supposed to be the NSW Speedcar Title at Nowra Speedway, but it’s hosing down rain here in Wollongong and I expect that the meeting will be called off. Not happy, Jan.