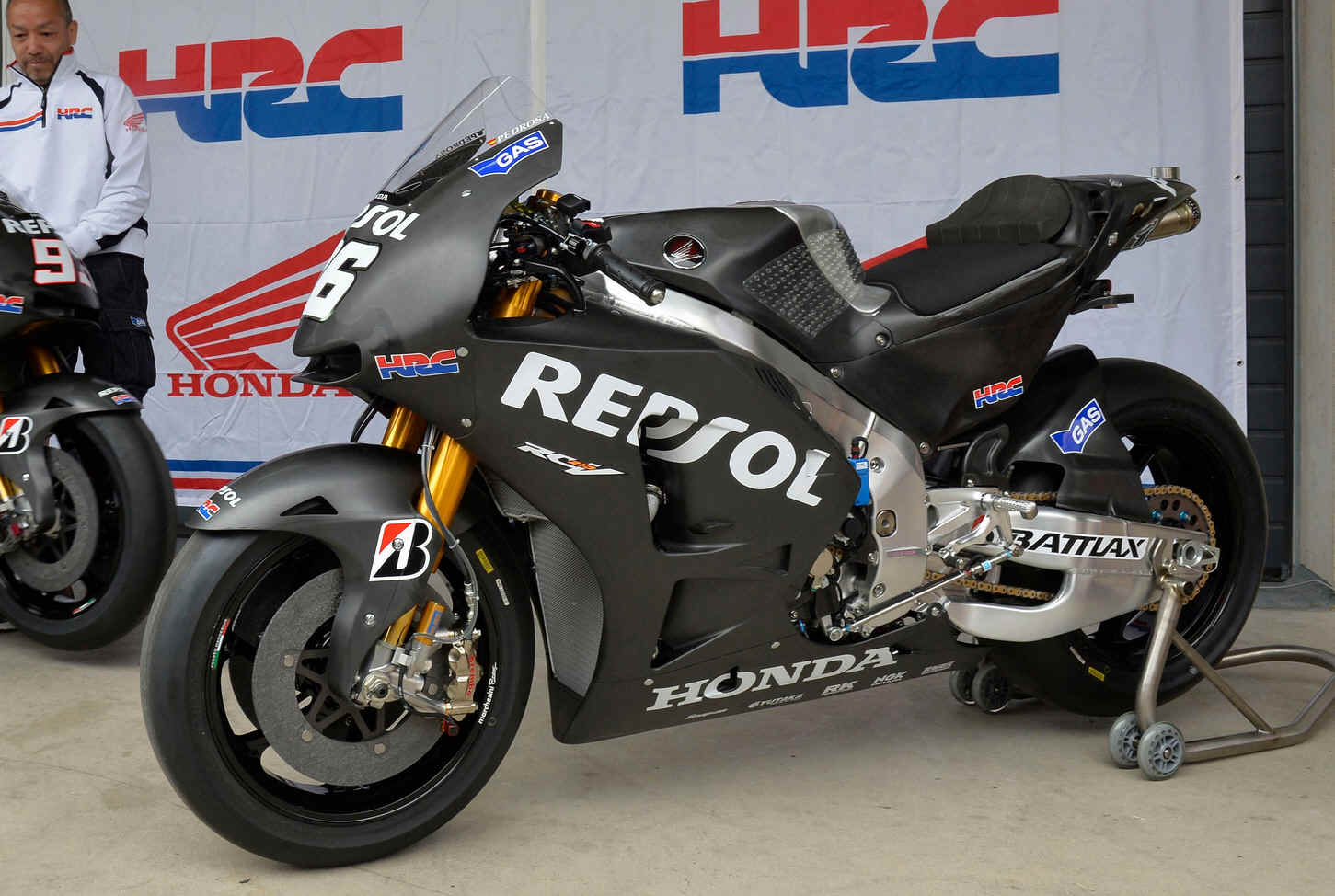 The Honda teams adjourned from Catalunya to Aragon yesterday for the next part of the testing programme. Unfortunately, the day was a complete washout with only a couple of riders venturing out for a few tentative laps before parking it for the day. The weather forecast is looking better for later in the week and Yamaha and Suzuki are expected to test if it improves.

Worryingly for them, Honda chose to debut its new, 2014 challenger. The new Honda, which HRC chose to show in public for the first time, is a brand new bike from top to tail. The new engine is tuned for the reduction in fuel tankage mandated for next season, but according to the boffins, is more powerful and more economical than the RCV213 presently being used. Marquez and Pedrosa will be testing the new bike if the weather improves as well as doing on-going testing of the current model. The internet is still abuzz with the encouraging results of the Suzuki test and the “who will ride the Suzuki” game is on in earnest. My two cents worth is that they need to keep RdP because he already has MotoGp experience but, given that the pool of top riders in the class are pretty much all spoken for (with one notable exception), they should be looking to the top echelon of Moto2 for their second rider.

The notable exception is Cal Crutchlow, of course. Out of contract at the end of 2013 and with Tech III actively courting Pol Espagaro, CC35 would seem to be headed for limbo in terms of finding a top team for which to ride in 2014. His earlier courtship with Ducati ended badly (some say due to incautious comments made by him to the media when the negotiations were at their critical stage) otherwise he could be seen as a good replacement for Hayden who must SURELY retire at the end of the season. I believe that CC35 is still holding out a vain (I think) hope that he will get the vacant seat in the “works” Yamaha squad should Rossi decide to retire mid-contract at the end of this year (the idea IS being floated). So, that leaves Suzuki. I have no idea of his credentials as a development rider, but he is fast and, up until last weekend, seems to leave all his crashing (he does a lot of it) to practice and qualifying, so maybe it would be a good fit.

In any event, time is running out for the popular Brit. The Moto2 ranks are brimming with talented young riders itching for a chance to step up and, unless CC35 plays his cards right (something he doesn’t appear to be brilliant at doing) the chance my pass him by altogether.

And what about Ducati? Well, the teams tested at Catalunya on Monday but the results were desultory. Both Hayden and Dovizioso tested the “lab” bike and the normal one and found that the modifications made to both bikes hadn’t really substantially improved anything. Both ‘works” riders appear to be getting very antsy, making statements like, “What is needed is a complete re-design of the whole bike.” something that simply isn’t going to happen in the short term.

Some days are diamonds, John Denver sang. For Ducati, the years have been anything but and there is no sign of it getting better anytime soon.