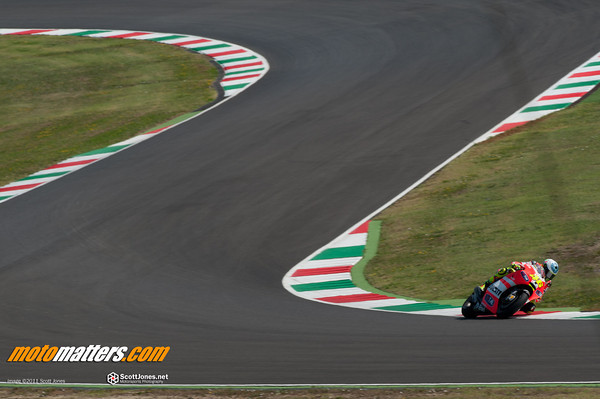 It must be a slow news day today because, far from commenting about this weekend’s MotoGp event at Catalunya, the always-interesting Superbikeplanet has instead published an article that speculates on the future of Valentino Rossi.

I like Soup. Dean Adams has a laconic (if sometimes jingoistic) style of writing and it is always sprinkled with a good dose of humour into the bargain. But the idea of just what MotoGpp WILL do when Rossi retires is something that must be exercising the minds of the men who control the money. He has occupied pride of place for so long that there are millions of fans who can’t remember motorcycle racing without him and cannot conceive what that might be like either.

However, the fact must be faced. Rossi WILL retire and probably sooner rather than later. He has always said that he will keep going as long as it is fun and it plainly isn’t at the moment nor has it been for over two years.

So, let’s set aside the idea of the when and think about the what. What WILL MotoGp do when their Number 1 drawcard is gone? For a while there it looked like another Italian was going to assume Rossi’s mantle of the press and fans’ favourite but a shocking day in Malaysia put paid to that. What is needed is time, time for DORNA to groom a new superstar and get the fans used to the idea of life after Rossi.

Candidates? Well, with the exception of one rider, none of the present incumbents qualify. Lorenzo is now considered old, his Lorenzo Land antics old hat and  he is perceived as being a machine that metronomically churns out the laps. Dani is seen as too serious and his reputation is still tainted in the eyes of some fans because of his clash with Hayden at Estoril in 2006. Crutchlow is a contender but I think that he will reach his limit fairly shortly and, anyway, his PR machine already seems to have alienated a lot of fans. At the moment he really needs to keep his helmet on and the visor down. Of the rest, I just can’t see a contender. I did think that Stefan Bradl could be an “alien” but he, too, seems to have peaked and I wouldn’t be surprised to see him lose his seat in a year or two.

Which only leaves Marquez and, in this writer’s opinion, he ticks nearly all the boxes. He is fast, daring, unpredictable, has an astonishing work ethic and handles the media brilliantly. The only thing that is lacking at the moment is a “schtick”, something that makes him stand out. He is still a little too focussed, too analytical and that isn’t that surprising. Give him a year to master the MotoGp bike and he will be able to “loosen up” and develop a more accessible persona.

MM93 has arrived just at the right time. As Rossi eases out, he is easing in and is the rightful heir apparent to Rossi’s mantle as the best of the best.

And, speaking of MM93, this gem from motogp.com

Marquez and Spencer: the grand meeting.

Now it is no surprise to regular lifers that I have reached the conclusion I have. I am, after all, a dyed-in-the-wool Freddie Spencer fan AND a dyed-in-the-wool Marc Marquez fan. But, really, can you tell me any other rider that you can name who COULD succeed Rossi?

Like the photo above, Rossi is moving out of the picture. Marquez is moving in. That is all.