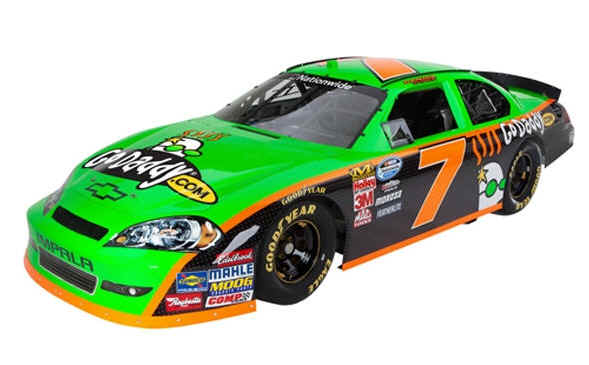 Of all of mankind, sports people seem to be the ones most affected (afflicted?) by superstitions. There are some, for example who attribute Danica Patrick’s current run of “outs” in NASCAR to the fact that she is driving a green car. Green is a no-go colour in the world of speedway. All of us are amused and perhaps even entertained by the superstitions that are revealed from time to time and how our favourite riders/drivers seem to be slaves to them. Valentino Rossi, particularly, seems to not only BE a superstitious person but takes great delight in flaunting his peculiarities as well. His pre-race ritual of squatting beside the bike while gripping the right footpeg with both hands is famous. And it is always the right one; Rossi will never climb on the bike on the left hand side.

So, this article from the official Apsar Racing web site makes very interesting reading. It is quite long but well worth reading right through as it lifts the lid a little not only on what the superstitions are, but, more importantly, why they exist.

Listening to the same song, straddling the bike from the same side every time, performing a particular stretch routine, making the sign of the cross or putting a certain glove or boot on first. Riders employ many methods in order to maintain focus, many of them with no logical basis. The objective is to try to block out the environment, focusing all thoughts into one, and above all reinforce the idea that everything is under control. Some of these gestures are virtually copyrighted and are sometimes copied by novices. Who is not curious to see Valentino Rossi always watching the Moto3 race start from the wall as a spectator, or bending his knees and clutching them before getting on his bike?

Manias, superstitions, fixations, ideas or routines, call it what you want, but all riders need a ‘safe place’. They need to repeat a sequence of actions, however insignificant, to help them concentrate and stay focused. If you did a comprehensive survey many of them would admit to the same procedures, but each uses his own mechanism of concentration to try to have a sense of control over something that is beyond control. The rain, contact from a rival, a breakdown. . . These are just some of the drawbacks of motorcycling beyond the control of anyone, but still most riders convince themselves that they can be mastered.

Contrary to general thinking, concentration, disconnection, abstraction, responses to fear. . . these are all parameters that can be trained and over in a race weekend are almost evenly combined. Unfortunately, while the riders are elite athletes and act as such to many extents, they neglect to take care of certain aspects that are more important than their skill. Especially in the early days. Many extremely talented riders have been left behind due to their bad habits, which they try to cover up when their performance slumps.

Training daily, eating a healthy diet and resting is the bread and butter of an elite athlete. Training the mind in order to face the pressure of the big occasion is also fundamental to optimizing performance. Being able to concentrate and manage intense moments of concentration is basic. The rider must know how to structure the weekend in terms of priorities and focus to perform at their highest level in each session. There are two types of concentration: introspection, used to loosen up, and fixation on outside factors. Rest is also crucial to avoid excessive mental fatigue, which can affect physical performance. The better the results are, the easier it is to rest. If the rider is too self-critical and has not scored a good result, they will analyse all the reasons why and will not disconnect.

Do not confuse rest with isolation, which can sometimes form part of the period before concentration can begin. Finding a place to eat alone, escaping to the motorhome for a game on the console, or just a nap, are some basic mechanisms to release tension and drive away negative thoughts. There are riders who must be completely exhausted at the end of a Grand Prix weekend. Who has not asked for a picture with their favourite rider and the most they have managed is a posed shot. Some riders reach such levels of concentration that they are little more than zombies, their bodies roaming the paddock but their thoughts elsewhere.

‘Controlling the uncontrollable’ also applies to fear, the riders’ biggest enemy. In sport there are many types of fear and one of the most significant is the fear of failure. In riders the most ‘logical’ fear is that of a big crash. The natural human response to fear is paralysis, avoidance and struggle. ‘These riders who crash at 200km/h and ten minutes later get back on the bike are crazy!’ It is a common remark but there is little truth to it. The accumulated level of adrenaline is such that a rider’s first thought after a fall in the middle of a session is ‘quick, I need to get back out because the session is nearly over,’ not ‘oh dear, I crashed.’ Fear can appear later when in the cold light of day they think again about the damage they could have possibly done. This fear is more a friend than foe, as it helps to recognize the limits and impose a specific prudence in future. In contrast, excessive fear or panic may block logical though, becoming a handicap for a rider or indeed any other person.

In order to understand a little more the grey matter of motorcycle racers we see self-belief as another way to face reality. Very important indeed. There is scientific evidence that positive or indeed negative thinking influences brain responses. But be careful, your self-belief must come from an objective place. And humility must be your universal force. Think that it is best to be positive, without losing sight that in order to win every battle must be fought first. Arrogance and overconfidence are a fast track to failure.

That said, when you see an athlete doing some strange gesture or following a curious ritual, do not be surprised, it is their way of trying to get a sense of control over something that is basically uncontrollable.”

This weekend sees the Grand prix of Catalunya, Marc Marquez’s “home” grand prix. So much to play for, it will be fascinating. And, speaking of the Spanish wunderkind, he had the opportunity of meeting the man whose record he has eclipsed this year at a special event run by Alpinestars in Italy. Marc and Freddie Spencer apparently had a lot to say to each other and Spencer, for his part, had some very complimentary things to say about the new kid on the block. 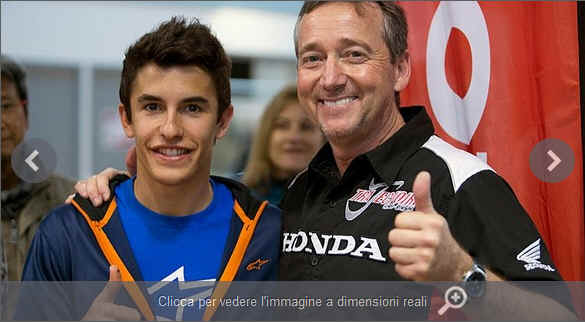 One of the best captions to the photos was provided by one of my Facebook friends. It goes like this.

FFS: Hey Marc, what would you do if they gave you a fiery, hot 500cc two stroke grand prix bike to ride?

MM: Go out and smoke ’em, just like you did, Freddie!