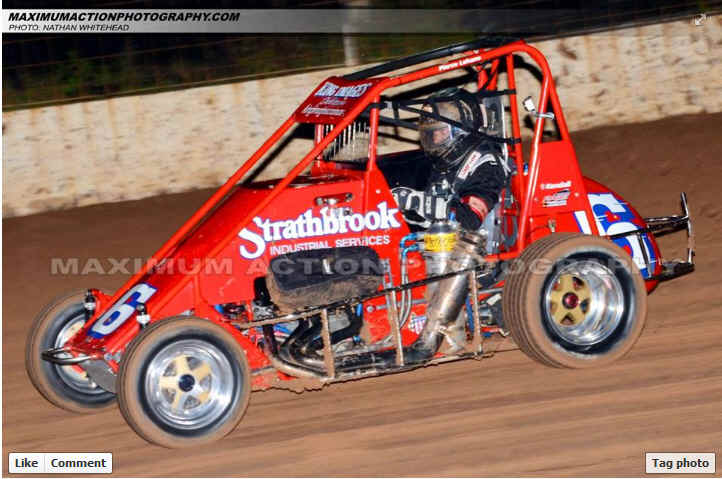 Busy weekend this weekend. On Saturday it was the last meeting of the season at Nowra Speedway. I can’t remember racing on into June at Nowra but a few rain-offs and some rescheduling meant that here we were at the track on the second weekend in winter. Fortunately, the organisers decided to make it a twilight meeting and start the racing at 1530 (1630 eventually) The track had taken a lot of water in a huge downpour on Friday and there was a lot of standing water on the infield. Worse still, the pit area was badly affected and it looked like maybe we would have to miss out altogether. But, with two South Coast Titles to be decided as well as a massive demolition derby, they decided to go ahead and it’s good that they did.

There was a good roll-up of cars considering that the official speedway season is over and that many drivers have already started stripping their cars and getting them ready for the next and it looked like it was going to be a great afternoon of racing. Now here I must explain an arcane feature of speedway that may be unfamiliar to my more tar-oriented readers. At the start of the night (afternoon in this case) the track is prepared but not ready for racing. A thick layer of clay covers the surface and it needs to be packed down tightly before racing can begin. So, before the races themselves begin, all drivers are expected to bring their cars out to the track and do wheel-packing. This is a task that every driver and crew member hates, but knows that they have to do. Wheel-packing consists of driving around and around the track, very slowly and following the directions of the track staff who stand on the track in each corner. The cars start circulating right up near the safety fence. As they drive around, they compact the loose clay down into the surface and squeegy any water than may still be in it down the track towards the infield (remember that most speedways have slightly banked corners)

As they drive round and around you can start to see the surface become smooth and harder. As the track staff watch this happening they gradually direct the drivers to drive further and further down the track towards the infield until, when the job is finished, the cars are covered with clay and the loose surface has been compacted down. It’s sort of like using the cars as road rollers. Done properly, the process will ensure that the track is smooth and compliant and that there will be any number of options for drivers to use while racing rather than just hugging the pole line.

Here I have to say that Dave Ford, the man responsible for track preparation at Nowra, always does this job sensationally well. Drivers consistently praise the track surface and agree that it would be wonderful if other tracks had a racing surface as good as ours is every time they raced.

So, wheel-packing took place and it was looking awful. The extra rain overnight had turned the loose clay on the surface into a quagmire and cars were literally getting bogged trying to get around the track. So much clay was being picked up by the wheels that it was jamming the wheel arches full of clay and the cars were grinding to a halt. Track staff were manhandling the cars to get them pointed in the right direction and a big patch of clay just at the entry to Turn 1 was looking diabolical. But then one of the staff hit on the idea of sending all the sedans off the track and just getting the compact speedcars (there were only three of them) out on the track.  At first I was skeptical. Compacts are, as the name implies, very small and very light open wheel cars, but the idea was brilliant. With no wheel arches to clog with the loose clay and their light weight meaning that they didn’t cut through the loose surface as much, the compacts did what the sedans couldn’t do. They tamed the bog hole and packed it down (after many, many laps) into what was needed for racing to start, albeit an hour late. Had it not been for Phil’s brainwave and the cooperation of the compact drivers we wouldn’t have had a meeting at all.

And so it turned into a great afternoon’s racing. And, along the way, we saw what could be the beginning of a new career. A young man called Pierce Lehane (pictured above) came down to just get some practice. He was driving a speedcar and his was the only one at the track so the officials allowed him to do some laps by himself in between the races. Now this is an interesting young man. He is only 17 years old and is a multiple Australian Champion in the discipline of kart racing on tar. He has raced overseas as well and has a top 5 finish in the World Championships in his division so he is no mug. He was very tentative at first as he had never raced on dirt, but, as the night wore on, he grew in confidence and started to wind the car up a bit and slide it around like you are supposed to do. By the end of the evening he was allowed to start from the back of the grid in the compact speedcar feature race and, while staying out of the way of the “real” racers, he showed true pace and good race sense. Mark the name down, he could be a big star in this sport.

So, in the end, it was a great meeting, the track surface holding up for all the 28 races and providing the opportunity for the drivers to strut their stuff. The night finished with a demolition derby and, despite the fact that these events are an integral part of speedway lore, I have never been able to generate any interest in them at all. This one featured over 20 cars and was mercifully over pretty quickly.

Home at a decent hour for a change allowed me to catch some sleep before jumping in the car on Sunday morning and driving 200+ kilometres to Canberra for their 2nd last meet of the season. As most lifers know, whenever their regular commentator is unable to do the job, the ACT club calls on me and I am more than happy to help them out. It was cold in Canberra yesterday. I lived there for 20 years but I’ve been away for over eight and I’d forgotten how cold it got. Thankfully, my good wife reminded me just as I was about to head out the door and I grabbed my scarf, beanie and gloves. I ended up wearing for nearly the whole day!

As usual, the ACT club turned on a great meeting and the racing was excellent. It wrapped up about 1430 and I headed home. Thankfully, today is a public holiday so I can catch up a bit and kick back with my wife. Maybe we’ll go grab some breakfast somewhere nice, like the excellent Manning Street Cafe in Kiama. Yeah, that seems like a good idea. Why am I sitting here?????