Phew, so much has happened since the last time I posted. A frantic WSBK meet at Donington, another Casey Stoner whitewash at Estoril, a BSB meet that saw Josh Brookes climb in the points, a very pointed interview with Valentino Rossi and lots more besides.

BMW finally shrugged off their traction control and tyre wear issues at Donington to not only record a win, but a 1-2 win at that. Melandri beat the home-town favourite, Leon Haslam, to claim the German marque’s first victory since entering the series over two years ago. It’s been 35 races since BMW debuted and their story is one of over-supply of staff (the pits a PI were awash with people wearing BMW Motoraad shirts) and under-supply of results (3 podiums). The off-season much have seen some butt-kicking from the distinctly unimpressed BMW hierarchy as the 2012 bike arrived at PI minus BMW’s own proprietary ECU and with a Magnet Marelli unit (like everyone else uses) in its place. The difference was instantly noticeable and completely vindicated the opinions held by many pundits, myself and my good mate, Derek J Hanbidge included, that it has been the German team’s stubborn insistence on doing things “in-house” that has been the major cause of their problems since Day 1. The MM ECU has transformed the bike from a vicious, tyre-eating monster to a competitive bike without hardly any other changes being made to what was always  basically good package.

Indeed, were it not for an errant Johnny Rae in Race 2 at Donnington, the marque would have recorded not just another win, but another 1-2. Rae cannoned into the back of Melandri’s BMW who was looking for a way around Haslam and both the BMW’s were out, hence my somewhat cryptic title today. Proving that there is no justice in racing, Rae was able to sort out the death wobbles and score a win. Good for the locals, but foul luck for BMW. 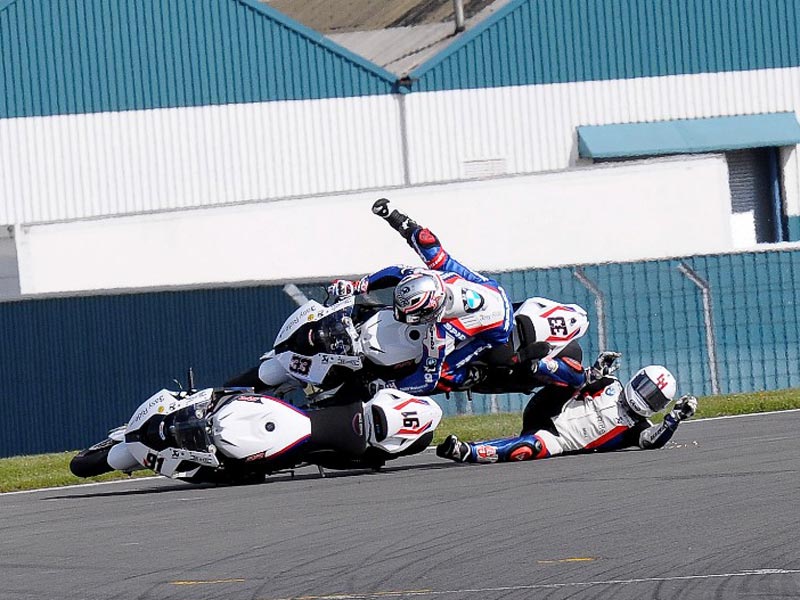 In MotoGp, Casey Stoner showed them who was boss at Estroril (sadly the last MotoGp event to be held at the popular Portugese venue). Stoner was simply too good, holding off the Spanish pair of Lorenzo and Pedrosa again and doing all that was required to keep the psychological as well as the points advantage. But the race of the meet was the Moto2 race where another Spanish pair staged the best knock-down, drag-out brawl since Rossi put Lorenzo in his box a couple of years ago at Jerez. The lead on the last lap changed 4 times and it was only a magical, physics-defying “around the outside” pass by Marquez in T7 that finally sealed the deal. Espargaro tried a block pass in “Hayden” corner, but ran wide on the exit and the race was done. I know I’ve said it before, but mark down Marc Marquez as the next Valentino Rossi, this kid will be a superstar very soon, (in fact, he already is).

And, speaking of the Italian Stallion, his tale of woe at Ducati continues. 7th place and 26 seconds behind Stoner means that there is no improvement at this stage. And poor Nicky Hayden was even worse, an ECU glitch meaning that the bike was trying to go ridiculously fast in the corners and was as slow as a slug on the straights. And the disenchantment that we have seen on Rossi’s face in pictures this season is now boiling over into words as well with the champion remarking on Monday that the WSBK race from Donington was great racing and that MotoGp was “boring” Surely we will see Rossi announcing his retirement at the end of the year as media speculation on that front begins to accelerate.

Most of the major MotoGp stars are off-contract at the end of the year but it seems unlikely that there will be any major changes at the top. Honda will surely retain Stoner and Pedrosa, Yamaha will keep Lorenzo but don’t be surprised if the rumoured swap of Spies for Dovizioso takes place. Hayden must surely go soon, he’s been past his use-by date since 2007 and Rossi may go too. If Ducati suddenly end up with two vacant seats, the question is, who will fill them? More to the point who would WANT to? Funnily enough, any rider who isn’t presently riding for a “works” team would gladly climb on the Ducati despite its woeful reputation. A “works” bike is a “works” bike after all. It’s to be hoped that the complete revamp that is promised after Indianapolis will at least partly solve the problems, although I notice that Preziosi politely side-stepped questions from journalists during the week as to why he was building a Yamaha for Rossi. How he must wish that he had never made that comment at the beginning of 2011 🙂 .

So we may well see a domino effect at work in the MotoGp paddock next year as well. The key will be, as it nearly always is, what will Rossi do? Once he has decided, the rest of the pieces should (fairly) neatly fall into place. The one big glitch that nobody seems to have an answer for is, how are Honda going to deal with Marc Marquez? Because of the “rookie” rule, he can’t be brought straight into the Repsol “works” squad as a third rider (remember, Repsol ran 3 riders for a while back then) but Honda will definitely want him in MotoGp in 2013. Perhaps Repsol will find some more money for Gresini or LCR and Marquez can make his way in through one of them, much as Casey Stoner did.

Interesting times are ahead, for sure.