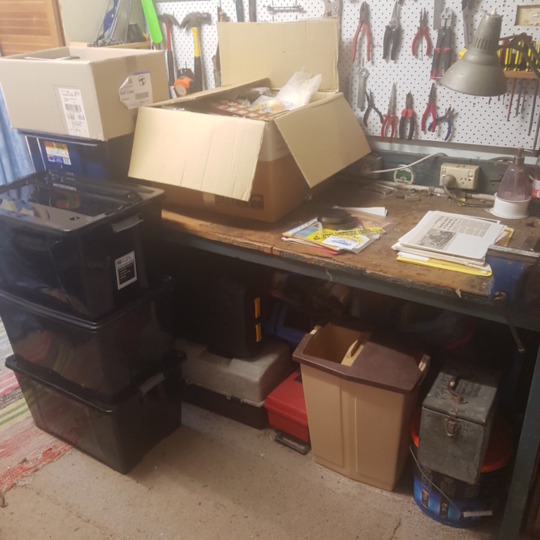 It’s been 20 years or so since Canberra Road Racing Club, the club I helped to found in 1977, ceased operation. A combination of factors and the actions of one disaffected member hastened its demise and the people involved have long since moved on.

However, there are still plenty of us left who remember the great days, the club meetings in the Morgan’s garage in Melba, the super-successful road closure meetings at Macarthur Park and the many successes that our riders achieved on both two wheels and three.

And I am reminded of this often as people continue to post up photos taken in the day, buried in various peoples’ collections for over 40 years and by the number of former CRRC members who are still my friends on Facebook today. Why, only today, someone posted the video of the 1981 Coca Cola 800 endurance race at Oran Park, in which CRRC was represented by Kent Miklenda and Neil Keith, riding the Shadowfax Kawasaki which now resides in my garage.

I have also been oft-reminded by my good mate, Rick Miller who was a stalwart of the club as well as being my mechanic for all the years that I lived in Canberra. Rick has taken his always-troublesome wrist and retired (sort of) to the warmer climes of Queensland as so many old road racers do (the cold in Canberra plays havoc with old racing injuries as one ages). Rick now lives on the Gold Coast and is running a bike shop there doing repairs on my era of bikes, giving a whole new meaning to the term “retirement.”

We don’t keep contact as much as we used to but, every time that we DO, Rick is at pains to remind me that, in the last treasurer of the club’s garage in Canberra is a filing cabinet filled with CRRC documents and memorabilia. He has been guilt-tripping me about this for longer than I want to admit, his reasoning being that, as the guy who STARTED the club, it should be MY responsibility to curate the remaining bits and bobs of it.

As it happens, one of the club’s famous members, Ken Fisher, was having his 80th birthday party on Saturday night and I was invited. Time to bite the bullet and collect the goods from Geoff’s place at the same time. I really had no idea how much stuff that it would be but I reasoned that, if it all fitted in a filing cabinet, it should all fit in the boot of my little VW Golf, especially if I folded the back seats down.

That was assuming that the stuff was still there and Geoff hadn’t long since lost patience with me and ditched the whole thing, after all, it was his garage in which it was taking up space.

A quick phone call revealed that, yes, Geoff still lived in Weston Creek and that, yes, he still had the stuff. He had decanted the contents of the filing cabinet into plastic tubs with lids and moved the cabinet outside with a view to disposing of it. So, at the appointed time, I rolled up to his place and renewed an acquaintance that had lapsed some 20 years before.

The boxes JUST fitted into the Golf so we passed the time, and I shot off to visit some other friends and kill some time till the party in the evening. Needless to say, I was very grateful for Geoff’s patience.

As coincidences go, the one that happened was a pretty amazing one. One of the cardboard boxes was/is filled with old trophies, some perpetual ones but mostly annual presentation ones with rider’s names on them and a lot of trophies purchased for presenting to riders at race meetings. And, at the top of the box was a small cardboard box with a pewter mug in it, wrapped in bubble wrap. Geoff said, “You might find this interesting,” It was a trophy that was to be presented to Ken Fisher, whose 80th birthday party I was due to attend that very night and was supposed to be presented to him at the Presentation Night in 1996. Quite how it was never actually presented we didn’t know but you should have seen the look on Ken’s face when I handed him the box and he opened it! According to Ken it was his best birthday present and he used it for the rest of the night.

On Sunday morning I took the boxes out of the car and dragged them into the garage. A quick leaf-through proved that it was a treasure trove well worth finding. As you’d expect, much of the contents are out of date and really only of interest to those who are actually mentioned in it. Folders filled with minutes of club meetings, records of club champions over the years, copies of the club magazines, “Flat Chat” and “The Dummy Grid” a cash box (no, no cash) filled with old CRRC stickers, unobtainable now. A box of colour slides from Bathurst and Macarthur Park, all my old negatives and slides of Mac Park and other CRRC activities. I remember that I donated them to the club, I shouldn’t have, but now I have them back, TWO 16mm movie films, no idea what of so I need to find someone who can digitise them for me (along with the half a dozen Super 8 movie films that I took during that era.) One of those films records the famous Graeme Crosby crash at Oran Park when he flung the Captain Snack TZ350 into the wall at BP corner while trying to pass Stu Avant and win the 500cc race!

There’s a lot of acrimonious stuff too, related to the disaffected member that I mentioned at the start. Goodbye and good riddance to him.

To say that the boxes are going to take a lot of cataloguing is a monumental understatement but there’s no hurry. By far the most significant find is the Cathy Richards Memorial Trophy, however. Cathy was our club’s ladies champion and tragically lost her life in a practice accident at Winton many years ago. To all of us who knew and loved her, this is the most precious find of all. 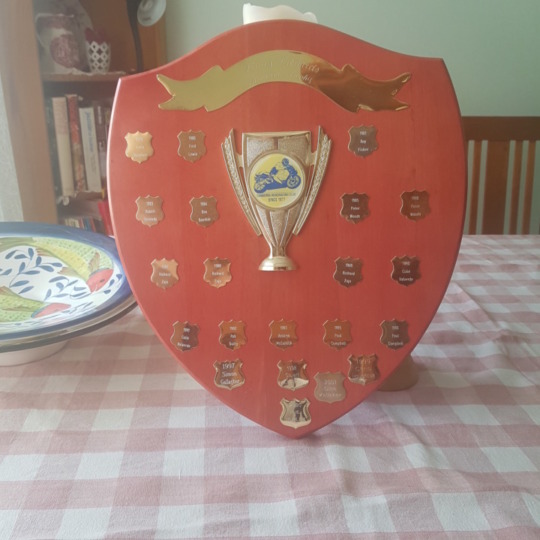 I think that some of the memorabilia may end up at Nabiac, it seems like an appropriate place especially given Brian and Margaret’s connection to Canberra and the club.

I’m kicking my self that I didn’t take a photo of Ken’s pewter, I’m hoping one of his family members do.

As is usual with these “dos” it seems that more people recognised ME than I recognised THEM! This included someone who I talk to all the time on Facebook but have never met. He always has very incisive comments to make about racing and I really enjoy reading what he has to say. But I couldn’t quite figure out why he was a Ken’s birthday party. So I asked Laurie, Ken’s brother, on the quiet so I didn’t look like a mug. Turns out Allan prepared the 125cc racer on which Ken’s son won three Australian titles back in the day. Needless to say, the subsequent conversation about CRRC, the road closures, etc, was a pretty lively one.

I drove straight home after the party, got home about 2330, it was a great day.