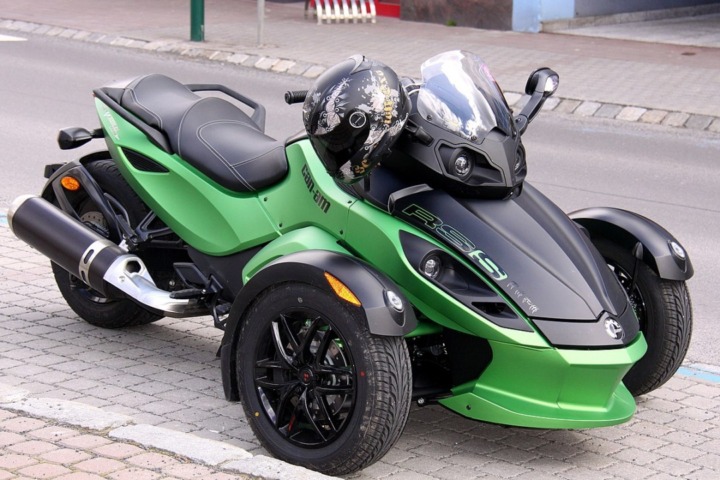 A member of my local riding group today posted up a question about Can Am Spyders. He wanted to know how the group felt about them and added that some motorcyclists had a very low opinion of them and the people who rode them.

To begin with I was shocked because I thought that we, as motorcyclists, were a pretty eclectic group and pretty accepting of anyone who rides. Yes, we have a go at Harley riders and riders of brands that WE don’t ride, but, in the end, we are don’t discriminate against them. But, apparently, there is some pretty noticeable discrimination against Spyder riders by some. Apparently, according to these silly people, Spyders aren’t motorcycles and people who ride them aren’t real motorcyclists.

Well, you could have fooled me but, let me delve into this a bit further. Firstly, and most significantly, people who operate Spyders are called “riders”. Got that? Yeah, they’re not called drivers, they’re called riders.

Secondly, how many wheels does a Spyder have? Three, right? Well, so do sidecar combinations and we call them motorcycles. So do three-wheeled trikes that are ridden by people with various disabilities that don’t allow them to ride a solo.

What sort of licence do you have to have to ride a Can Am? You guessed it, a motorcycle licence.

I could multiply examples but I think you get my point. Just because Can Ams don’t lean over in the corners does not mean that they are not motorcycles.

And yet, I hear the occasional whisper about them as not being “real” motorcycles myself and, apparently there’s a lot more of it out there.

Now, before someone springs to the defence of these very misguided people, let me add this very significant point.

I have ridden a Spyder and I LOVED it. At the time that I was recuperating from my accident in 2010, I road-tested a Spyder as a possible alternative for me to get back into riding allowing for the disabilities that I had. I thought it was great, SO powerful, great brakes, luggage capacity and exhaust note just to name a few.

I didn’t BUY one, though, for a number of reasons. Firstly, it was just too damn expensive. But it didn’t fill the bill in terms of comfort. The tank is very wide at the back and the DHP on my right hip didn’t allow me to spread my legs wide enough to ride for any distance in comfort. The model I rode was before the later versions that have electronic power steering and I found the strain on my injured and recovering right shoulder and arm was just too much.

So, is the Spyder a motorcycle? Of course it is. Therefore and by default, the people who ride them are motorcyclists. I wonder how many of the detractors have actually ridden one themselves so that they can form an informed opinion? I am guessing very few of them.

I have no time for discrimination of any kind and I will not tolerate prats who discriminate against riders who choose a slightly different path to them just because it suits them.

And, you know what? I’m getting into my middle 70s and I am finding my big bike to not be as easy to manage as it was. Downsizing to a smaller bike isn’t an option, I couldn’t get used to the “dinkiness” and the lack of character. And, no matter the size, some of the problems with my increasing degree of incapacity will still be there.

Can I see me owning a Spyder some time into the future? Heck, yes. And I won’t care what people think about it because, being a motorcyclist is all about doing what pleases YOU, NOT about doing something because it pleases someone else.

*climbs down off soap box*