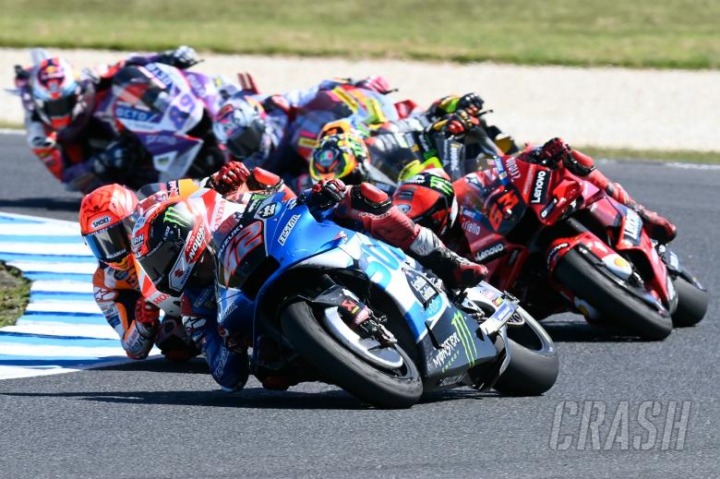 Alex Rins took a well-deserved victory at Phillip Island on the weekend. Exploiting his Suzuki’s excellent handling and care of the rear tyre, Rins came from 10th on the grid to win a nail-biter and give Suzuki at least some joy as they prepare to end their GP campaign in 2 races time.

PI delivered, as it so often does, is it any wonder it is the universal favourite of the riders? However, it wasn’t looking good in the lead-up to the race. Heavy rains had drenched the area in the days before forcing the organisers to close the camping grounds at the track (a VERY unpopular decision) and reducing the crowd numbers for the meeting as well. The claimed 91000 spectators was probably gained by counting the legs as the long shots on TV showed the grandstands and the spectator areas being very bare indeed. As well as closing the camping areas, the local farmers around the track who make their paddocks available for parking at big events, were forced to close them as they were totally unsuitable for driving/riding on.

The organisers did the best that they could by putting extra shuttle buses in place and making free parking available in and around Cowes and encouraging spectators to take the buses instead. It certainly worked but long delays meant that many race-goers were left less than impressed with the arrangements.

As for the racing itself, after the track being almost underwater on the Thursday, it proved its design is far better than most with the surface being clear by Friday morning’s first practice session. Showers of rain did interrupt some sessions but the results on race day indicated that the serious impact on setup times for the teams was nowhere near as bad as was predicted.

Of course, the meeting was held in MY time zone for a change so it was great to be able to watch all the sessions without being bleary-eyed the next morning.

As for the racing, as I said, PI delivered, in spades. My favourite for the Moto3 title, Izan Guevarra, defied the fact that he had never raced at PI before to engage in a ferocious battle for the podium that risked everything but showed just how much securing the title really meant to him. At the death, he got to the lead and pulled away, a stellar performance that earned him the win AND the 2022 Moto3 world championship. Aussie favourite, Joel Kelso, saved his best for PI, scoring his career-best 8th place on an underpowered bike. He moves on to a better team next year and should be closer to the pointy end. The kid is surely a talent.

I have noted on numerous occasions that Moto2 really doesn’t interest me, how can you get engrossed in a formula that is so controlled? I did watch the race and gained a degree of amusement seeing the supposed next best thing, Augusto Fernandez score another own goal, crashing out of the race and endangering his tilt at the Moto2 title. Tech III’s decision to sack both of its current MotoGP pilots, 1st and 2nd in last year’s Moto2 championship in favour of Fernandez who has been winning races at slower speeds than either Gardner or his namesake, seems incomprehensible.

A side note that did not get covered by the TV broadcast, Jorge Navarro, who fell and was run over by the bike following, was helicoptered to hospital in Melbourne with a smashed femur and a punctured femoral artery. Proving once again that Aussie marshals are the world’s best, they were able to call for medical, staunch the bleeding and stabilise Jorge before the helicopter arrived.

And so to the main event. Jorge Martin, another of my favourites, had put the bike on pole but he’d never ridden a big bike around PI and there were doubts as to whether he’d be able to make the tyres last the distance. Marquez sat in the middle of the front row and had chosen a soft rear, causing some head-scratching in the pits. Knowing his aggressive style, how did he think he was going to make a “soft” go the distance?

In the end the race was just as enthralling as it should have been. Title favourite, Pecco Bagnaia, nursed the Ducati to 3rd, determined not to commit another unforced error like the others that have dogged his season so far. He probably could have won, but he probably would have crashed, too, so the choice was the right one. After seeing both his title rivals disappear, Quatararo to another accident and Espargaro to lack of grip, Bags knew that 3rd would be enough for him to finally wrest the lead in the title chase away from Fabio and put himself in the box seat for Malaysia this weekend.

As for Rins, he stormed though the pack, maximising the Suzuki’s legendary good handling and smooth power delivery, to carve up the field, take the lead at the death, hold off a ferocious challenge from Marquez and cross the line a winner. Marquez finally scored his 100th podium and, to him, that result was as good as a win. The Honda was still way slower than the Ducatis but the new parts that the team had brought to Australia certainly seemed to have worked and Marc’s new “clever” riding style reaped rewards. 2023 is looking good for HRC.

And Jack Miller? Well, it was a major disappointment. Centre-punched at T4 early in the race by Alex Marquez, his race was over almost before it began. Alex immediately went down to the Ducati garage and apologised and there is some suggestion from video footage not shown on TV that he had been himself served up by Bezzechi as he was braking for the corner.

No other track in the world allows a track invasion after the race is over, but PI not only allows it but approves of it. Hell, it’s a tradition.

Another fabulous PI weekend. I feel so sorry for people who think that Formula One or V8 taxis is great racing.