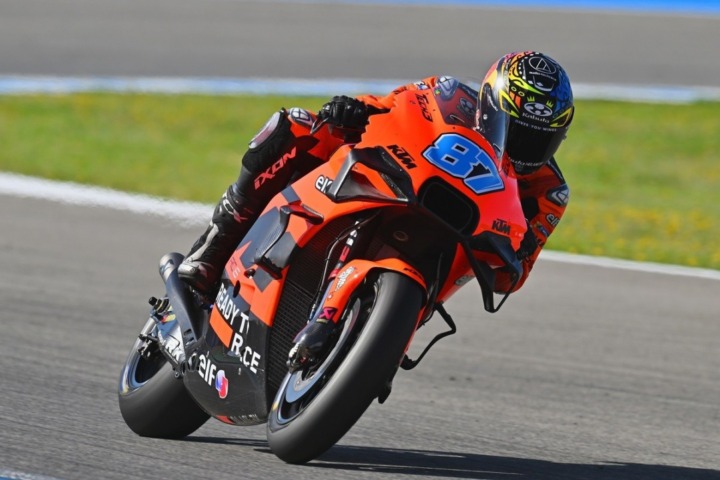 It’s no secret that Australia’s Remy Gardner has not been happy for much of this year in the TechIII MotoGP KTM squad. Hired at the start of 2022 as the reigning Moto2 World Champion, Remy looked to have made a good choice for his rookie season in the top class. The fortunes of the KTMs have been on the rise for the last few seasons and they have been race winners, but 2022 has been a pretty poor year for the Austrian outfit with both the factory team and the satellite TechIII squad struggling against the armada of Ducatis and the lone Yamaha of current World Champion, Fabio Quatararo.

Neither Remy nor his fellow rookie team-mate, Raul Fernandez have been able to trouble the scorers much with both of them often finishing outside the points. Despite the KTM team boss, Pit Beirer, expressing confidence in both riders and advising that allowances should be made for their rookie status, the pressure has been on for some time for the two riders to start doing something to justify their positions.

As always, however, the behind-the-scenes politics has had as much to do with the current parlous situation as their on-track performances have.

Fernandez, whose opinion of his own worth has always exceeded the opinions of everyone else, doesn’t want to be at KTM at all. He wanted to go elsewhere in 2022 but his manager sort of forced the issue by reminding Raul that, if he DIDN’T sign with KTM, he probably wasn’t going to get offered another seat anyway so he’d be better to stay on with the Austrian factory even though it wasn’t his preferred option. Raul’s mercurial Latin temperament has done the rest with him sulking about being with a team he really doesn’t want to be with since the season began. Unhappy riders rarely perform at their best and he, despite publicly declaring that he is the better rider, has been consistently out-pointed by his team mate all season long.

For Remy’s part, his issue has been that the bike is not delivering what was promised when he signed on with the team. You don’t have to be a mathematician to see that he is right. The problem is that, instead of offering this advice to team management in private (though he probably HAS), Remy, with typical Australian forthrightness, has expressed the opinion in public. And that has been exacerbated by Remy’s manager, the often blunt, Paco Sanchez, weighing into the debate and roundly criticising KTM about the bike and the way they are treating Remy. Sanchez, who also manages Joan Mir, has also made quite a few enemies at Suzuki for the same reason but, since Suzuki are out of there at the end of the year, they probably don’t care.

As a side-note, if Mir DOES sign with Honda for 2023 (a scenario that is far less likely now than it was a couple of months ago when it was considered to be a certainty), the clash of wills between HRC boss, Alberto Puig and Sanchez will definitely be something to see.

Remy has now been told that there is no place in the team for him in 2023 despite Beirer’s earlier caution about giving him some time to develop into a MotoGP rider. Fernandez is definitely out of there and it looks like TechIII will have an all-new rider roster next year with Espargaro returning from HRC and Oliviera who doesn’t want to be there either but has run out of viable options anywhere else.

Both Fernandez and Gardner have, it is rumoured, been offered seats back in Moto2 but that seems pointless for either of them; there’s nothing to prove there and there’s no likelihood that better MotoGP options will be available in 2024 anyway.

So Remy’s only option, if he wants to stay in MotoGP (you can forget the WSBK rumours, WSBK is where riders go when they are on their way DOWN, not their way up) seems to be the RNF outfit. There IS a place there with the retirement of Andrea Dovizioso, and, in my opinion anyway, the Aprilias that the team will be running next year are vastly better bikes than the KTM so, if the stars align correctly, a move from KTM to Aprilia in 2023 could be absolutely ideal.

As always, watch this space.