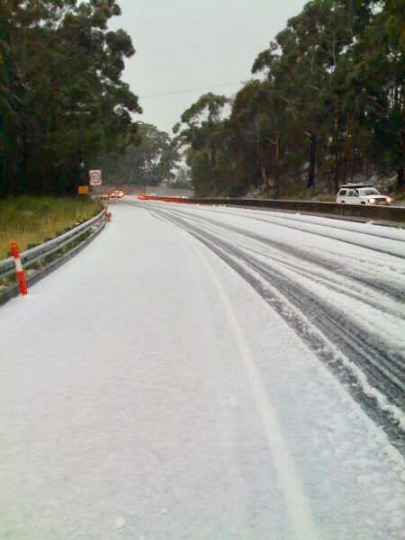 At first sight, you’d think that this is a picture of a snow-covered road and you’d be entitled to think so, but it’s not. That’s what I thought at first when I crested the hill on Mount Ousley and started heading down the hill towards home on the 7th of August 2008. I had experienced a similar situation along Lake George one winter night many years before with the road being covered with snow and a great deal of confusion amongst the motorists who had come upon the situation suddenly when heading to Canberra.

I was heading back to Wollongong after teaching for the day at Port Hacking High School. I should have twigged that something wasn’t quite right as it gradually got darker but I was focussed on getting home so it didn’t really hit me until it was too late. A couple of kilometres before this it has started to sprinkle and I was concerned that I was neither wearing, nor carrying, any wet weather gear. It was looking like the last bit of the trip home was going to get very wet.

But it was a complete surprise to crest the rise at Mt Keira and see the Princes Highway transformed into a winter wonderland. Bear in mind, here, that this section of road is only a couple of hundred metres from the ocean and not far above sea level.

Once the shock wore off, it was clear that the road wasn’t covered with snow but with hail, tiny granules of hail so small that it looked for all the world like snow. A freak storm had just dumped the hail all the way down the highway until it levelled out going past Wollongong University.

I reacted immediately (as I could), dropped the bike back a few gears and checked my perimeter. I was pretty much alone except for a BMW sedan some distance in front of me. A few cars flew past me at barely-reduced speed and then speared off the road as the drivers braked suddenly on a surface that was suddenly providing no traction.

By this stage I had both feet off the footpegs and was “paddling” along, just trying to keep the bike upright and heading in the right direction. My usual highway practice of staying well behind the vehicle in front of me was was paying off handsomely. I realised that there was no way I could pull over and stop, deviating the front wheel from straight ahead was not an option. Nor could I simply pull up where I was when the rest of the traffic was still moving.

My boots were filling with water but this was the least of my problems. But once I acclimatised, I realised that I was still in reasonable shape as long as everyone else around me kept it as steady and sensible as I was doing.

Just as it looked like a collision was inevitable, the stop lights on the car went out and it accelerated out of harm’s way. In the mean time, I was up on my feet, trying to run down the road and catch the bike before it did any damage.

Meanwhile, a couple of helpful motorists who had seen the incident, had stopped, and, together, we picked the bike up and dragged it to the side of the road. It didn’t look that bad and, having thanked my good samaritans, I hopped back on and extremely gingerly, rode the bike down the hill, out of the hail build-up on the road, and home. 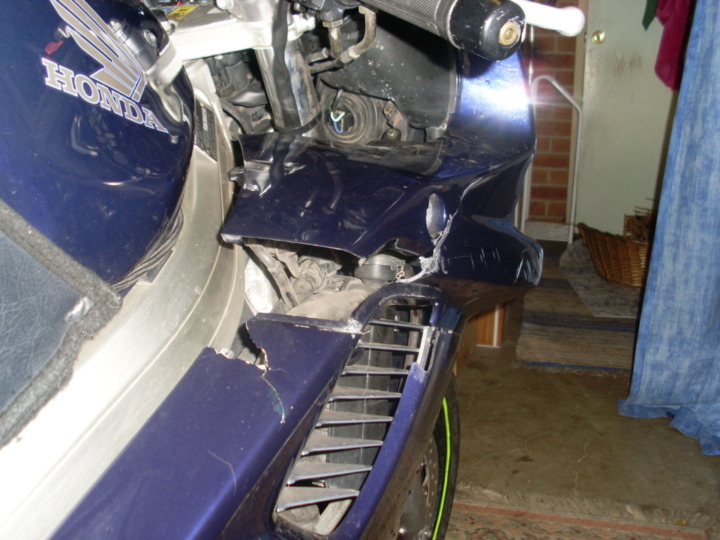 Subsequent events, however, proved that, though the bike wasn’t that badly damaged, the cost of repairing it was far greater than the amount for which it was insured and so it was written off.

The photo at the head of this article was published on Facebook yesterday, I’ve never seen it before and it brought back the memory of how a freak hail storm brought about my downfall.

Could/should I have done anything differently? I don’t think so, it was just one of those “wrong person in the wrong place at the wrong time” situations.

As a sidenote, while I was upset, I wasn’t as much as you’d think. Of all the VFRs I have owned, Blue Bayou was my least favourite so it really wasn’t the loss that it might have been. I don’t know why, I just never bonded with it. Perhaps that’s a good thing in light of its final moments.