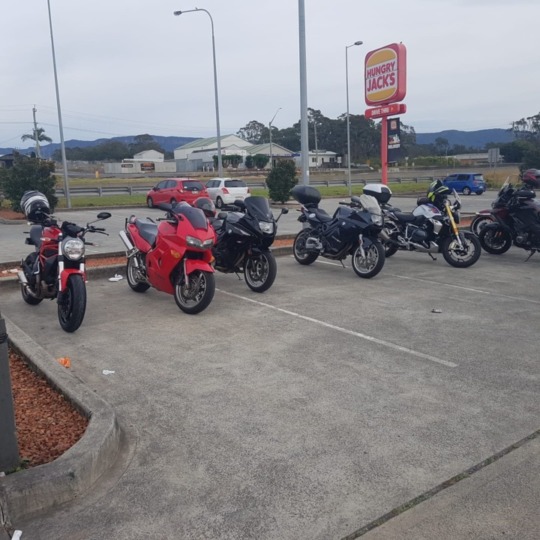 For some reason the title of this very forgettable movie kept running through my head yesterday (Sunday). You see, I had posted an EOI for our (IRA’s) traditional breakfast ride (last Sunday of the month) and there was a pretty good response. Based on that response I posted it as a ride and held my breath. Those of you who have or do organise these things will know that the initial response is enthusiastic but that, the closer you get to the ride date, the interest drops off for dozens of different reasons and the actual number of riders who turn up on the day can be just a handful (or even less).

So, it was somewhat of a surprise when I turned up at the agreed point to see half a dozen bikes there, all well ahead of the agreed assembly time. A few of them were owned by people I knew but then, as the half hour between arrival time and departure time ticked away, bikes just kept on arriving! It was like being a kid let loose in the toy shop. The photo above was taken early.

By departure time we had 24 bikes on hand and 26 people (2 pillion passengers). As it turned out later, one of the bikes and two of the people weren’t even IRA members and weren’t waiting for our ride to leave at 0900! They were just stopping there for a cuppa before heading out with an exploratory Sunday ride of their own. I assumed they were with us and so they pulled out with the mob and came down to Kangaroo Valley for breakfast with us. It was only later that I found out that their decision to join us was just a spur-of-the-moment thing! 🙂

I’ve been on lots of group rides and I’ve been ride leader for a lot of them as well but it was a unique experience to look in my mirrors and see a huge crocodile of headlights following me. The TEC was so far behind I couldn’t even tell who he was!

We got a great run through the suburbs and an equally good one up the Pass where we paused briefly outside the Pie Shop just to get the group back together again. The local council has been working hard on the rain-damaged roads in the Highlands with both Pearson’s Lane and Myra Vale Road being much improved. Barrengarry Mountain road was closed for months after sections of the road collapsed onto the road below but it is now open as well. There is still much work to be done and there is a section of contra-flow where stop/go lights control the traffic. I don’t mind them because it means that you can filter through to the front of the queue and get a clear run once the lights go green. It’s going to be quite some time yet before the road gets the all-clear.

It’s Winter so it was pretty cool, the temp gauge on my bike showing 9° as we passed through Roberston. Good warm gear meant that that wasn’t really a problem.

On arrival at the venue I hastened across the road to apologise to the proprietor of Maddisons Café. You see, when I booked I told her that we would possibly have 10 people. She didn’t seem to be at all perturbed when I told her we had 26, she was more concerned that we wouldn’t all be able to sit together at the big table out the back. Amazingly, the extra numbers didn’t seem to faze the staff at all as our orders were delivered quickly and with good humour from the staff. I’ve plugged Maddisons before, nothing has changed, it’s a great venue. 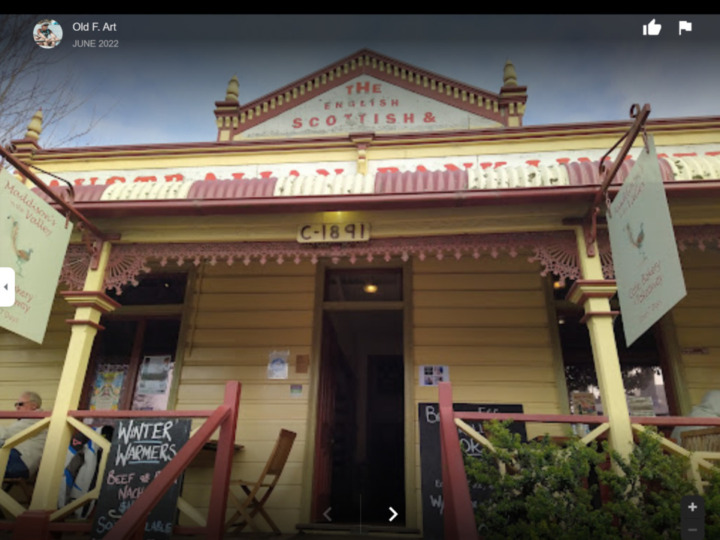 The end of brunch was the effective end of the ride and various participants headed home by way of all manner of routes. I voted to head back up the mountain and stopped in at the Pie Shop for a milk shake before heading home. It was great to find some people there that I actually knew for a change so the conversation with good friends like Peter McGinnes, delayed my departure.

Another reasonable run down the Pass (I should mention that John Keogh was taking shots at the tree on our way up so there is a good photographic record of the ride as well) and I arrived home about 1330.

What a great way to spend a Winter morning, catching up with a lot of old friends and lots of new ones as well. I can’t wait till the last Sunday in August where we will do it all again, must think of a cool venue.